Long before War was officially declared, a number of minor border clashes took place as both sides rushed troops to the disputed area known as the Oregawn Territory. Here, the bridge which had been built in the shadow of Blast Off Ridge was a crucial communications link. On the 10th of September an Oberhilse expedition met a similar force of the young Red Queen's troops. The armies spent an uneasy night then formed with the morning dew and faced each other, waiting for the order to Charge! 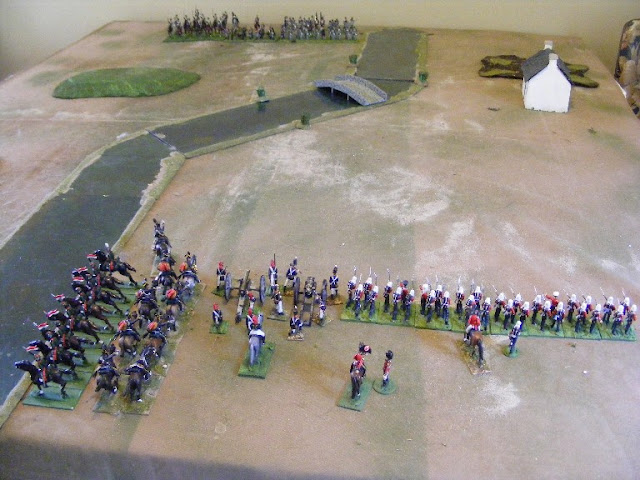 The armies deployed "by the book" the day before battle is joined. 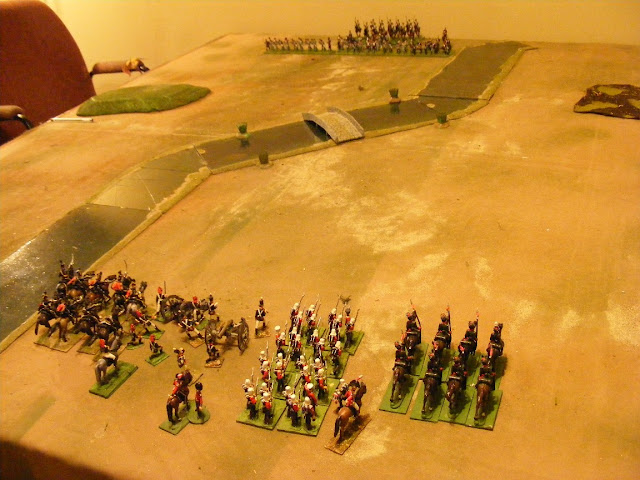 The armies redeployed on the day of battle.


THE BATTLE OF BLAST OFF RIDGE: SEPTEMBER 11th 1838
The battle will be described largely by means of extracts from "The Rattle of Dice: Memoirs of a Frontier Soldier" by General M. Ross Ret'd and from a letter from General Howie posted to the Newport Chronicler. (pending) 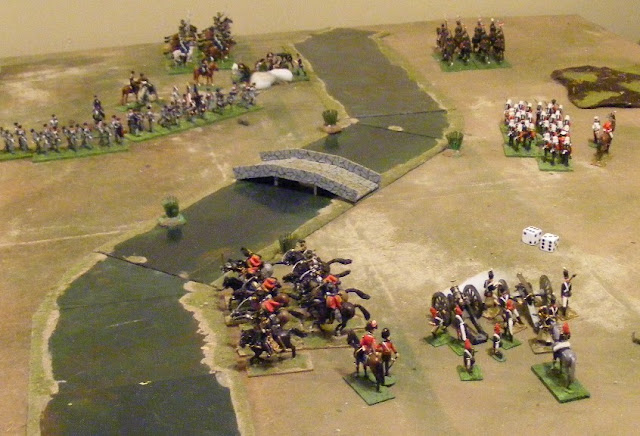 The Opening Moves  (fm "The Rattle of Dice") : "I was aware that talk about town was that the Faraway forces would retreat by night to escape us but it seemed most unlikely to me so I spent the night planning for battle the next day. The situation seemed familiar to me, so I perused my traveling library, and there it was in General Soubise's memoirs, the brisk little action at Blasthof Bridge where he bested the dashing Von Kornberg.  I studied Soubise's deployment and battle plan and while it is hard to argue with success, I thought I could do better. I decided to deploy my guns near the river with my infantry in line on their right. The dragoons I held in reserve to counter any move that the enemy made to flank us. Our intelligence reported that General Howie was in command of the Queen's forces so I could expect a brisk if not rash advance from the enemy's horse. I was not disappointed, as we formed up the enemy appeared ready to push a strong column of infantry up the river covered by his guns while the cavalry on either flank looked set to try a double envelopment. Well, I thought, at least our Dragoons will out number either cavalry wing, as long as my infantry can hold the other wing, we should be in good shape." 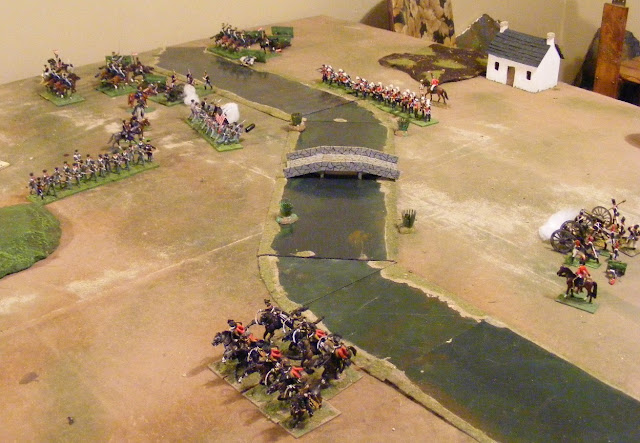 The cavalry melee ( a captured lancer can just be seen being led off the far end of the table.

The Charge of the Blue Dragoons. (fm "The Rattle of Dice")"It was as I expected, the enemy's lancers thundered up the river bank followed by the column of Faraway infantry. Rushing past our flank they wheeled into line. I was a little surprised to see the enemy's Hussars hesitate for a moment but took full advantage of the respite. I ordered the 2nd Infantry and 1st Field Battery to wheel left and engage the enemy with fire while the 3rd advanced to cover their flank. The 1st Dragoons were ordered to wheel and then charge. In a flash they had splashed through the river catching the lancers by surprise and scattering them."  (ed note: The lancers were scattered by the charge but there is little reason to support the suggestion that they were caught by surprise) 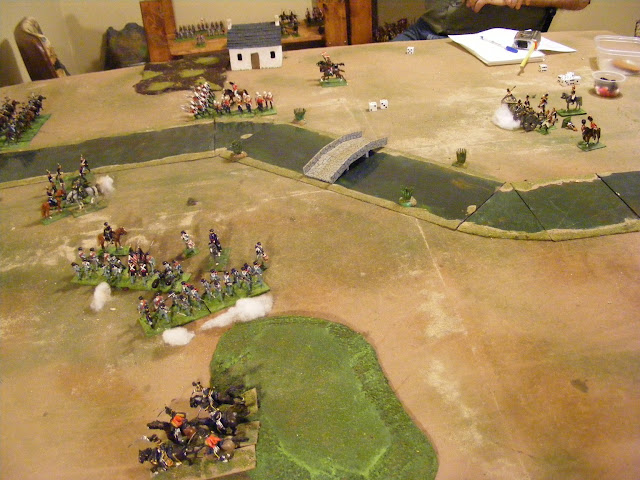 The Thick of the Fight  (fm "The Rattle of Dice") : "The triumph of the Dragoons was a sight to be seen but these brave horsemen were not done, reforming calmly on the enemy's bank, they hurled themselves upon the enemy. The Queen's men are well drilled though and formed square with text book precision. The Dragoons pressed hard upon the square but as most such encounters, were finally forced to pullback, pinning the enemy in place.


In the center the brave gunners in blue braved a horrendous fire from the Faraway artillery to concentrate on the enemy infantry. A faint mist on the river seemed to be spoiling their aim so I had to gallop up in person to direct the fire of the remaining gun before the fire had much effect on the dense target in front of them.
On our right, the summer of musketry practice paid off as our infantry wheeled in somewhat ragged formation and unleashed long range volleys at the enemy horsemen who had at last advanced but who feared to close. 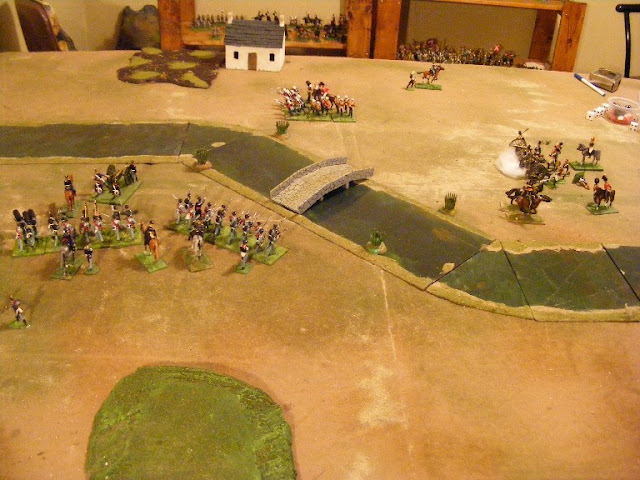 End Game  (fm "The Rattle of Dice") : "The sun was sinking slowly as the shattered remnant of the Queen's Hussars retreated back across the bridge. The Queen's infantry didn't look to have the stomach to rush the bridge but I ordered up the 3rd Infantry and ordered the Dragoons to shadow them and encourage them to retreat quietly to camp. There are some who may have clamoured for the extinction of the foe but it seemed to me that enough brave blood had been shed for 1 day. We had lost nearly a dozen gallant infantry, four or five Dragoons and as many gunners not to mention a smashed gun, but we had held the bridge and the enemy had lost as many infantry and all but 2 of his proud cavalry. I was well content."


(Note: This was a replay of the Blasthof Bridge scenario in Lawford and Young's Charge! or How to Play Wargames. It was played by Les Howie and myself in 2008.)

Ross Mac rmacfa@gmail.com
Born and raised in the suburbs of Montreal, 5 years in the Black Watch of Canada Cadets, 5 years at the Collège militaire royal de Saint-Jean followed by 4 in the navy. 25 years with CPC in IT simultaneous with 23 years running a boarding kennel. Inherited my love of toy soldiers from my mother's father. Married with a pack of Italian Greyhounds and 3 cats. Prematurely retired and enjoying leisure to game, maintaining our 160 yr old farmhouse and just living.
Home
Subscribe to: Posts (Atom)