There are many untold tales from ancient times, some of which bear a remarkable resemblance to various Tabletop Teasers by CS Grant. One of them is the ambush by Medes of the Witch-Queen Demiramis on her journey to the now lost Lion Temple in the hills overlooking the Black Sea.

The sun peeps over the eastern hills as the Queen and her escort enter the final valley.
The Queen's escort was led by a troop of Thracian light cavalry riding 1/2 a move in advance of the main column. They were followed by a troop of medium cavalry and a battalion of Phrygian medium infantry. The Queen herself and the treasure cart containing her offering to the Lion God was accompanied by Crikes, the  escort commander, and 4 Lydian elite heavy cavalry. A battalion of Phyrgian heavy infantry, a company of archers and a squadron of medium cavalry followed. If the Queen and her offering could make its way safely through the valley, she was assured of favour with the  gods regardless of how many minions had to die to ensure her safety. If she was forced to retire with her offering then the day would be a write-off but she could try again while if either she or the offering made it to the temple, there was hope for divine intervention. Any other outcome would be a tragedy in the making. 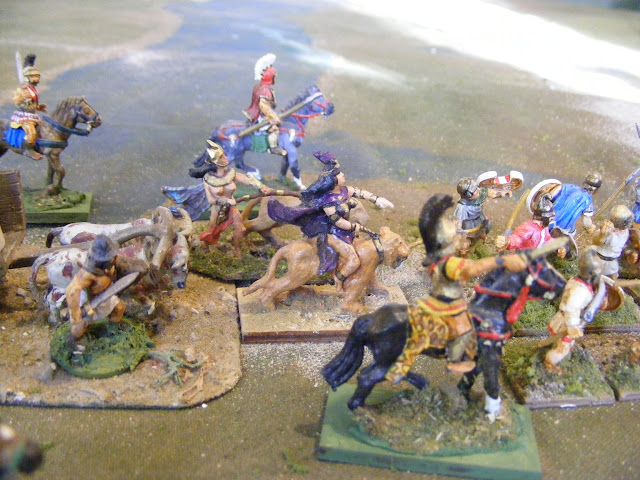 Word of the expedition had come to Rosius, Commander of the Medes on the border and he had dispatched Suthrones with a battalion of Saka light infantry archers, some Armenian and Skythian skirmishers and a squadron of Hyrkanian light cavalry horse archers. Realizing that troops hiding close to the road might be spotted by the advancing Lydians, and keeping in mind that he needed to draw the Queen well into the trap and then both block her advance and cut off her retreat, Suthrones planned carefully. The Hyrkanians were hidden in a draw near the end of the valley, once the trap was sprung, they were to use their mobility to ride forward and block the pass, relying on their archery to throw the enemy into disorder. The main body of Saka with Suthrones at their head took post in a wood on the crest of the ridge, 1/2 way down the valley. 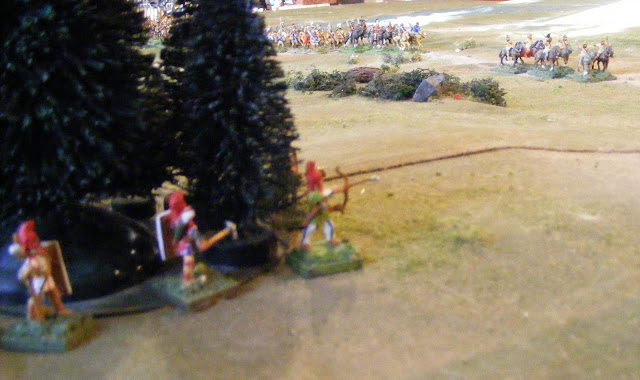 The Scythians were also concealed on the crest of their hill in a wood near the start of the valley. They were to wait until the ambush  was sprung then harras the rear of the enemy column. Last of all, the Armenians were placed in a group of rocks near the road with orders to wait until the Queen was in sight before springing their ambush. 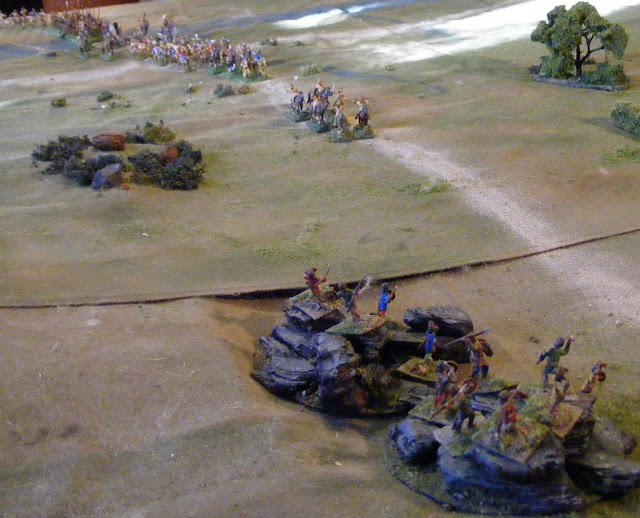 Armenian skirmishers lie in wait amongst the rocks.
The Thracians riding at the head of the column were aware of the dangers and keeping a close eye on the hills, spotted a flash of metal from amongst the rocks.  Sounding the alarm, they wheeled to face the hills. Behind them , there was a moment's hesitation while Crikes debated whether or not to urge the Queen to retire, then the Lydian column began to deploy, prepared to brush past these daring Medes. Unfortunately the infantry were slow to deploy (my rules use variable length moves) and a tremendous volley of javelins as the Armenians emerged from the rocks sent the Thracians fleeing. 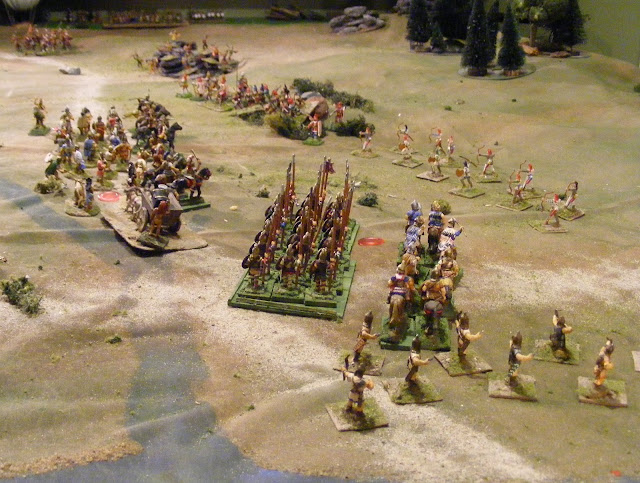 By the time the medium infantry had deployed ahead, they were under a hail of arrows from the Hyrkanians and Saka.  Repeated attempts were made by the medium cavalry to break through ahead but all faltered under the hail of arrows and even the Queen's personal escort came under heavy fire. The archers and Phyrgians deployed to the right and moved forward but the fire of the Skythians decimated the Lydian's archers while the Skythians and Saka nimbly fell back before the advancing spearmen.
With the Lydian cavalry all but destroyed and the infantry withering under the Mede's arrows, the Queen's safety hung by a thread, one rush by the Hyrkanians could seal her fate but suddenly Crikes himself was struck down by an arrow and seizing the initiative (the sides dice each turn to see who moves first), Bacchus, his second in command begged the Queen to retreat while he ordered the infantry to form a  rearguard. 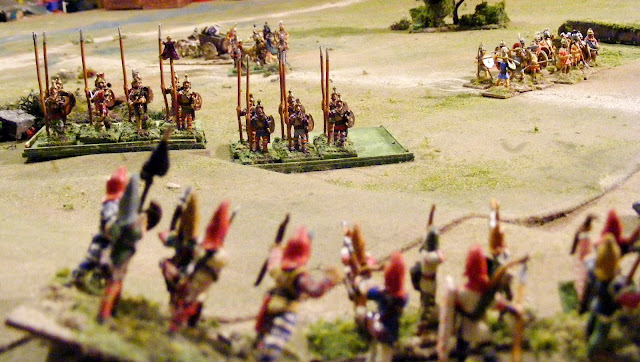 At bay.
It took a moment for Suthrones to recoginze that the enemy was getting away (pretty amazing really since this was a solo game but sadly true). Belatedly, he realized his arrows were not going to be enough, he ordered the Armenians to race around the flank to block the ford and putting himself at the head of the Hyrcanians, he led them in a wild charge against the remnants of the medium infantry. 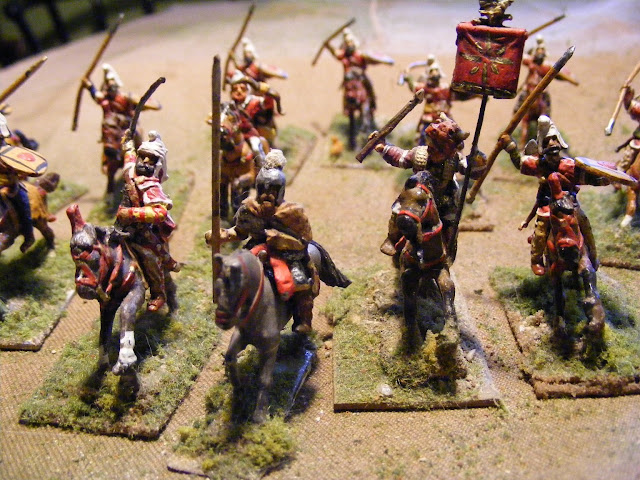 It was a close fought battle and Suthrones was pulled from his horse and sorely wounded but his loyal men pushed forward to rescue him and drove the enemy into flight. Almost surrounded by enemy archers , the Phyrgian spearmen could take no more and broke to the rear, only a handful of men retreating in order defending the standard. It was enough, scampering madly across the river (nothing like 5's and 6's on movement dice to aid a retreat) the queen and her Lions reached safety followed soon after by the lumbering gold cart. Her escort looked a little thin but given a chance to rest and regroup, they could try again tomorrow (and they did after a minor tweak to the rules and the Queen narrowly won through but that is another story). 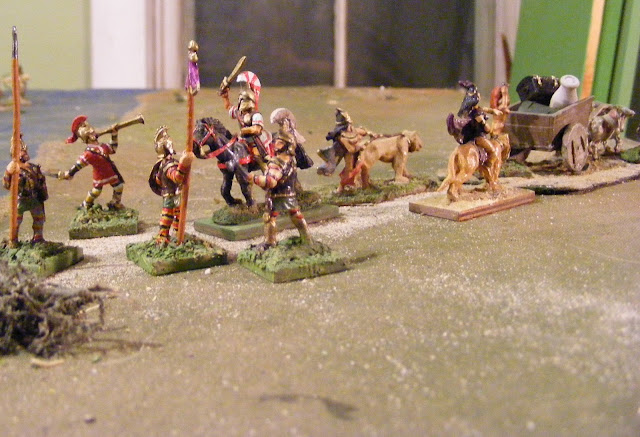 This recreation of an otherwise unrecorded event in 7thC BCE Anatolia was played solo, about 15 turns in an hour an a half using my Gathering of Hosts Rules. (See Gathering blog) and OS wargame figures. The Queen and her attendant coming from the Garrison Sword & Sorcery range, now available again courtesy of Rob Young.
Posted by Ross Mac rmacfa@gmail.com