I went down to the crossroads

Unlike Robert Johnson, I wasn't looking to trade my soul for success though, I was just looking for a game. My intention had been to play some more Square Brigadier, specifically a full table game, while also wanting to get some pre-horse and musket troops out. But........Huzzah is coming so I dove back into proof reading MacDuff, making a QRS and proper chance cards, painting up a few new figures, especially officers, mending a few figures and so on. Playing another MacDuff War of 1812 game to keep me in fighting trim as GM just made so much sense that I put the troops away. It was all starting to feel like work! 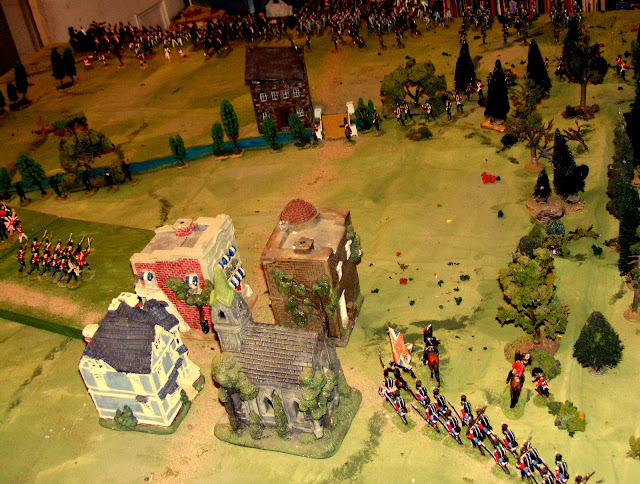 Any resemblance to an actual battlefield, living or dead, is purely a shortage of imagination.

Since I what I really wanted to do was play with my glossy toy soldiers, I decided to set up a MacDuff in Atlantica game, the biggest one I could fit on the table but using the proposed new organization. For once I didn't feel like hauling out an old chestnut of a Teaser so I started by casting about to see what would appeal. Attack and defense actions were more common historically than meeting engagements and the time seemed right but I didn't want to deal with fortifications, I wanted to see some maneuver. Battles where reinforcements arrived for one side or both were not uncommon and are welcome on a small table. I wanted all arms involved and I didn't want to do an actual refight. One of the more famous historical examples suggested itself as loose inspiration.

The last southern Atlantica game saw Oberhilse launch a surprise attack on Faraway but fail to capture a bridge intact. (see here) I decided that the delay while Oberhilse bridged the river would have allowed Faraway to bring up  reinforcements but that Oberhilse (Blue) might catch up with the  Faraway (Red) rearguard before the main army was up and concentrated. At the little hamlet of Belmont, the road from Standington to Brooklyn meets the road stretching from New Dundee to the Origawn Territory. (see map) Control of this crossroad is vital to Faraway's ability to counter Oberhilse's designs on the Origawn Territory. At the crossroad is a little tavern known to all as the Four Arms. It is the last tavern before crossing the frontier and is better know that the town itself and so the battle has come to be known as the Fight at the Four Arms.. 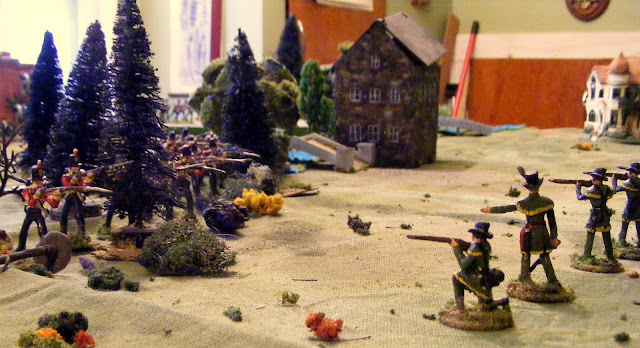 Forces will be as follows:

Unfortunately, after spending hours sorting troops, adding bases to spare figures and working it all out, I ran out of time. Hopefully the game will start tomorrow and run over to Monday.
Posted by Ross Mac rmacfa@gmail.com