The Hazards of Black Powder in the Garden

Last Sunday 2 friends came by to distract me and we took advantage of a warm day to game under the Willow tree. The first game as mentioned in the last post was a small Russian Civil War action. Les had also brought along his 10mm tricorne fellows, just in case. Since Jerry had to leave after several leisurely hours of coffee, conversation and cossacks and day light and energy remained to us, we reset the table, reseated our selves (I'm becoming very fond of sitting through a game! ) and broke out Back Powder. 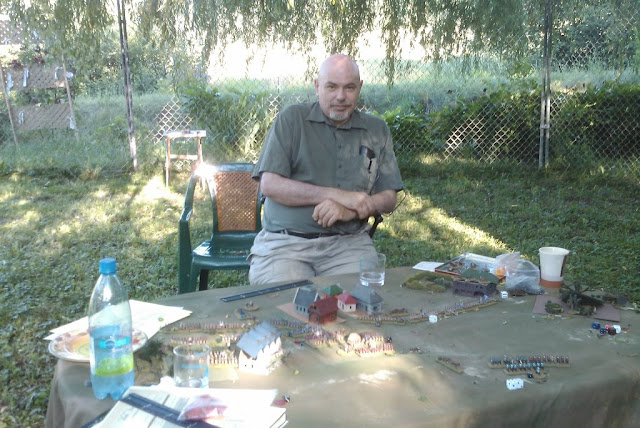 Plenty of fluids  to hand on a warm afternoon and no where for extraneous 'stuff' to go but the advantages of 10mm troops for a sit down game are obvious despite my difficulty in distinguishing 1 unit from another not to mention the occasional error in facing.....

The afternoon was somewhat more advanced however and a faint breeze had sprung up, sending the foam stonewall and hedge that marked the objective, tumbling across the table to be replaced by an unceremonious hunk of gravel, a constant barrage of Willow leaves occasionally obscured the lines of fire and Mystery the misplaced kennel now woodshed cat who can go days without being seen, interrupted us long enough to insist  upon being fed early. Most memorable was the invasion of a ferocious alien beast bigger than a man (well bigger than a 10mm man) with a smaller green worm impaled on its fangs. This creature, which can be seen crawling over the bayonets of one of the .....well, the not-Austrian regiments under Les's command (there are names for these countries but I have not yet learned them by heart.) right behind the colours,  spent a considerable while dodging bullets and dice as it sought a quite place for dinner. 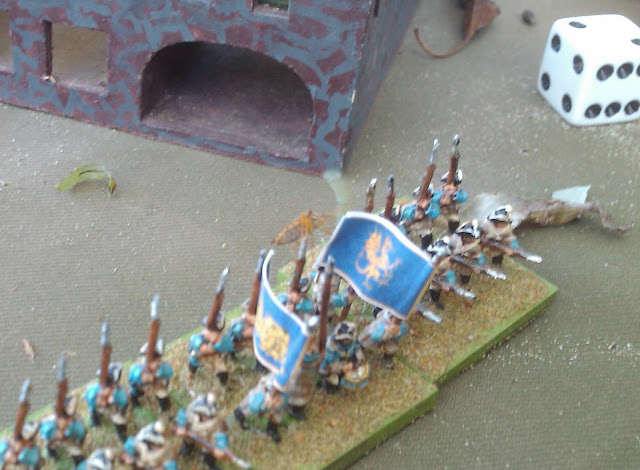 Stout hearted lads, they didn't flinch at all.
Posted by Ross Mac rmacfa@gmail.com