Chasing a Will O'Wisp of the Mind

I have this vague wargame idea that I want to pursue but I have a slight problem, I can't quite grasp and define it so every time I try to translate it onto the table, it slips away and the result isn't quite right. It has something to do with compression, illusion and imagination vs constant scale and reality.

As an "historical wargamer" I have at times in the past been unduly concerned, not to say obsessed, with questions of scale and player point of view in a search for realism in games, not new topics by any means. I have noticed over the last few year, with some emotional discomfort I might add, that my interest in facts and impartial history has waned and was, perhaps, never quite as strong as I had believed. In gaming terms I have come to accept that I have no real desire to re-create the great battles of history or spend hours reading detailed accounts of battles and campaigns, analyzing what happened when and why. At first this rather confused and worried me but eventually I realized that I was still fascinated by memoirs and accounts focusing on the experience as well as the fact of battle seen from various levels. I've never been much of a role player so that approach does not call to me at all and neither do man to man skirmishes. Since I still enjoy playing wargames, I started to look at why some were more enjoyable for me than others. At first I thought it was just an increasingly lazy mind that has led me to favour certain types of simple games but then I noticed something else, as well as glossing over details, they tended to break a rule of reality in wargames and offer the player simultaneous multiple points of view as well as usually providing drama and a good storyline.

It seems to me that when we examine our own memories, they don't tend to adhere to a constant scale or view point. Time and space collapse into memorable highlights and things we have learned afterwards become inextricably interwoven with our own memories. This phenomena can be even more pronounced when we read memoirs since there is no time lapse for us between entries. Perhaps a grueling 2 day march is compressed into one brief entry followed for us moments later by a dashing battle sequence in which we receive mostly the actions observed by our writer backed by a small bit of hearsay. What was perhaps a 10 minute firefight followed by a brief advance with the bayonet gets turned on its head with the firefight being dismissed with a few words while events of the brief but more memorable (and probably enhanced) charge occupy several paragraphs thus looming large in our vision of what has happened. This is why rules such as Charge! and The Sword & The Flame can be so satisfying, they tend to convey that distorted sense of reality that can be more real to our emotional beings than the actual facts.

That's just about enough for now but I want to lay a couple of games before you for contemplation. Some are more primitive in concept than others but they all contain an element of operating simultaneously on more than 1 level and of representing more than meets the eye.

The first is based on Shambattle (click on the link to view Phil Dutre's inspirational exploration of the original game straight up). This is Richard Larsen's game using a 3d version of the Shambattle map with a distillation of Joe Morschauser's rules and 40mm glossy toy soldiers by Britain's, Scruby and myself (just the 2 Sepoy units). 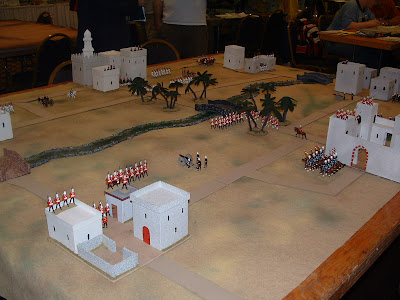 Its taken me a while to figure out what made this game so inspiring for me. The first bit was obvious, his figures which I had seen and fallen for the previous year, were the perfect fusion of two old favorites Britain's old toy soldiers and the elegant 30mm wargame figures that adorned Charge!. The game itself was quick, exciting and decided by the plans and tactics of the players, not their knowledge of the 1/2 page set of rules, and at first I thought that was it. Thinking more carefully about it now I can see another element. No scales or organizations were laid down but the opposing armies were composed of around eight 20 man infantry regiments with cavalry and artillery support or about a reinforced division. If one tried to puzzle out the scale based on troops and rifle ranges, the British fort and the Egyptian base town might have been 3 - 5 km away from each other BUT it felt much bigger. As the armies launched attacks, fought out the engagements, fell back regrouped and tried again, you got the sense of troops marching across the hot desert for hours, of deadly fusillades, gallant charges and fierce street fighting.

The next game was one I originally did in the 1980's based on the 1794 British invasion of Guadaloupe. I don't have a picture of the original but here is the 2007 reprise of it. 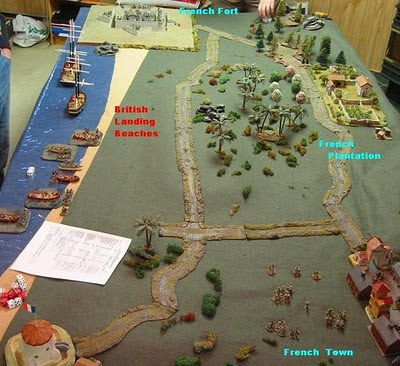 ( thank you e_t for the photo, Gary's ships and terrain, my troops and boats, rules Morschauser Meets MacDuff)

The table, representing the island, was originally divided into 3 tactical zones (the British landing site, Ft Fleur d'Epee and the main city) theoretically separated by miles of jungle. Borrowing an idea from siege games, players made day long 'strategic' moves (including 'yellow jack' attrition) switching to tactical moves when necessary (an assault on the fort etc). A practical solution but an intellectual one, having troops "teleport" through the jungle didn't give that feeling of time and space. When I resurrected the game (above), I condensed the miles of ground onto a single tactical table. Troops marching between areas had to go the whole way. It might not have felt like as large an island as Guadaloupe but as the French columns trudged turn after turn up the back road, to me the game seemed more satisfying even though the ground scale of the whole did not match the scale where tactical actions broke out.

Last but not least is one of my 54mm Colonial games from about 10 years ago. The influence of the Major General is evident. 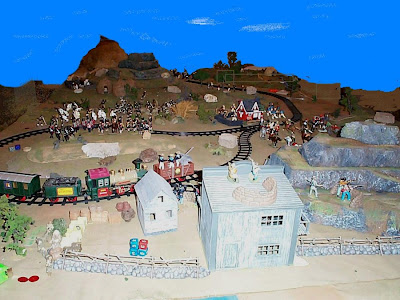 The game used a combination of player mission briefings and impassible terrain to encourage the players' imaginations to accept that the train from New Durban (hidden behind the far mountain) in one corner of the table, ran for miles through a mountain pass and across the veldt to the Hubley Mine, that a handful of troops were whole regiments and that locations such as the Mine, the Kraal, the Mission and the Rebel camp were hours apart, not just outside rifle range from each other. I still don't know exactly why, but it seemed to work, it certainly worked for me as GM and was enjoyed by the various players. (except possibly Sean, the young Midshipmen in charge of the train who panicked and left the civilians at the mission to be captured by the Emir's Bashi Bazouks after they had driven off the Nku khu warriors).

It strikes me that these wargames have something in common with model railway layouts like the one in Miniature World in Victoria BC. That display manages to compress 6,000 km into a continuous display of 50 or 60 feet that takes you from coast to coast and through time. Sleight of mind one might call it.

Now, how do I translate these thought into a wargame project? I had once started work on a 15mm Siege of Quebec game but the figures are long gone. I can envisage a Prince Valiant layout with the Count's castle in one corner, the Saxon chieftain's lair in another and all sorts of adventures in between, but what I want to work on is my 19thC British & American 40mm toy soldiers. The scene is set, the war of 1812 merged with the Canadian Rebellions, the so called Aroostock War and the Oregon Crisis but how should the games be designed and structured?

Or perhaps the question could be asked: "Can this wargames table hold the vasty fields of America?" (sic)


(Note: Please click on pictures for a larger copy.)