The topic of how much control a Wargame General should have over his troops is a topic that has been on my mind recently.  In part this is because I am not fully satisfied with any of the rules I am regularly playing at the moment and have started fiddling again, and perhaps in part today, because I played 3 games of Black Powder on the weekend and we made a change before the last one (well drilled rule for our SYW infantry)  that very slightly increased control without making it absolute and I found that this increased my enjoyment of the game even though I lost.  (by the way,you can see pictures of the games which were hosted by Les using his 10mm Pendraken fellows and very fine fellows they are too when you get close enough to see them. (if any one is wondering, I am the one in the Battlegames shirt, Les included no pictures of himself but he did appear in my garden if you check the July archive ) 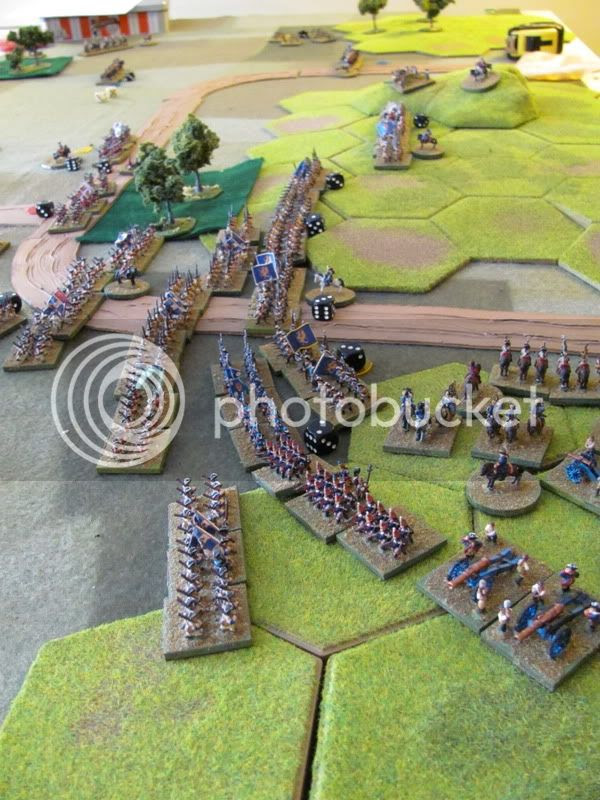 There are few people who would seriously contend that in life, and especially in war, that things always happen the way the person in charge wants them to happen, when they want them to happen. The question is more one of how much of Clauswitz's friction to include, which methods to use to model it and how much influence or control to give the player. Now, just to be clear, I was a fairly early advocate of chaos and friction. By the mid 80's I was using card activation by brigade, command control rolls for subordinate commanders, and soon after variable movement distances. Oddly, although combat & morale was dice based, I made several attempts early on to increase the predictability.

Since generalization and categorization often makes discussion easier despite being occasionally unfair in detail, I am going to take a stab at breaking wargames into 2 broad categories which form a continuum with a large overlap which I will include as a third category in its own right.


CONTEST OF WILLS.  These are games with maximum player control relying primarily on one's opponent to provide friction. We can start with  LittleWars: fixed moves, no control or activation roles, no dice used in combat. The only variables are the skill of the player with a 4.7" naval gun and the actions of his opponent. The Complete Brigadier took this even farther with dice-less calculated combat. More commonly these days, this sort of game would use fixed movement distances, alternate moves and no unit or command activation. Friction comes from your opponent's actions and from the use of dice in combat and sometimes morale. Volley & Bayonet springs to mind and its worth reading Frank Chadwick's  Game Design notes which are available on line.  The Venerable CHARGE! also falls into this category.

RIDE THE WHIRLWIND. These are games where the player has to struggle against the system as well as against the enemy. Usually there is some form of unit or command activation and combat and morale systems with a high random element and the potential for extreme results. Other common forms of friction are variable move lengths and card activation rather than a fixed turn sequence. The end result is  game where the player can usually make choices which maximize the chance of success when it comes to carrying out movement without being able to guarantee it and where combat can result in sudden and drastic turns of fortune leading to players always feeling a little on edge  and never really in control (hence riding the whirlwind). In extreme cases, it is usually possible though improbable that on a bad day, one could remove the enemy's army altogether and still have an attack fail to take its objective.   The French & Indian War version of my own With MacDuff rules developed in the early 90's would fall into this category as would many popular sets today such as Warmaster, Blitzkrieg Commander and similar games as well as some of the Two Fat Lardies games and others.

THE MIDDLE GROUND. These are games which include some or all of the elements of the Whirlwind but in such a way that either the friction is not decisive or a player can guarantee some level of success. The Sword & The Flame  springs to mind, the play sequence is card based and movement is variable based on throwing a number of dice but all units will be given a chance to move and even on a bad die roll, the unit will creep forward. Combat and morale are dice based but extreme results are rare and troop behavior predictable in broad terms, your British regulars might falter and they may break after heavy casualties but they won't run off the table screaming at the first sight of the enemy. Fire & Fury is another popular game that i would include here. There is an activation chart but a player can often arrange a guaranteed minimum result for well led  fresh troops. Combat results can vary and are based on a single die roll or the comparison of 2 single die rolls but there are upper and lower limits to the results that die roll can produce.  DBA is yet another popular system that would fall here. Oddly, while the F&IW version of the MacDuff makes it into the whirlwind category, the original version written for Colonial games would fit here since troops within the command range of the general did not have to take a control test, they only had to contend with variable moves.
In the end, the common thread of the Middle Ground is that there are variables to complicate things but if you remove the enemy army, your troops may struggle if they roll nothing but 1's, but they will get there eventually!

Its interesting now that I look at it, how many very persistently popular sets fall into the Middle Ground, TSATF, F&F and DBA all range in age from 15 to 25 years and are still widely played in more or less their original form despite minor changes.

I enjoy and play games that fall into all three categories but find that Contest of Wills type games often lack somewhat if no opponent is available and a large proportion of my games these days are played solo. Ride the Whirlwind games can be fun, especially if taken lightly but I do find them frustrating on days when the luck is consistently bad for either side and also find that the longer and more complicated the scenario, the more frustrating it is to have everythung spoiled by a couple of bad die rolls or card turns. By default this seems to point me back to the Middle Ground, an area I haven't spent much time in recently.  Something for me to contemplate as I prepare to refight Platea on the weekend. 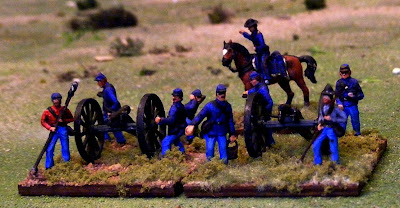 Painting at last! Nothing like a game to inspire. The Belmont Volunteer Battery in training as Hants County arms itself against the threat in neighboring King's County. The glue is still drying on the bases as these Airfix and Imex  1/72nd prepare for battle against Jerry's rebels.