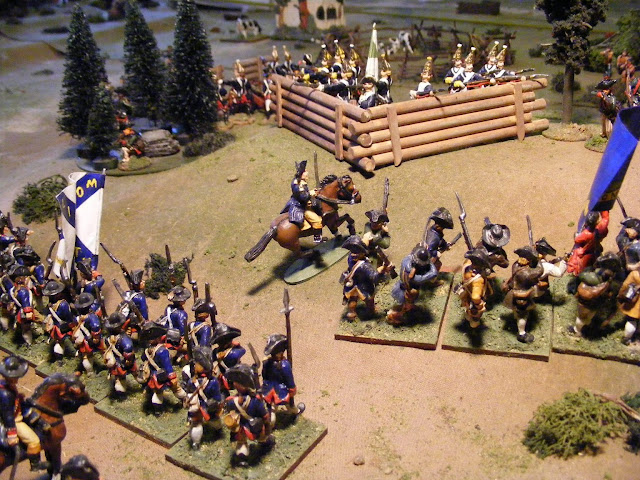 An artists conception of the battle getting various details wrong of course
This is a layout for a Hearts of Tin 40mm AWI (Acadian War of Independence) scenario scheduled for Saturday. (The so called Acadian Rebellion has been raging sporadically (!?) for about 5 years in 3 scales (54mm then 1/72nd & 40mm) and after 9 or 10 games, the British have yet to claim a victory but they have not given up their attempts to reimpose tyranny on the free folk of Nova Scotia.)

The scenario in hand is based loosely (very loosely) on the Battle of Bennington in 1777. The terrain, taken from 3 conflicting maps,  has been greatly simplified, and bits shifted about to fit on table or left out and lots of pesky trees eliminated. 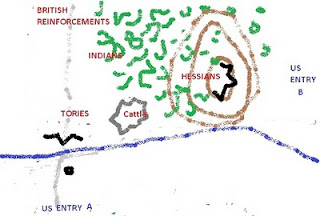 The orders of battle have been modified  to suit what troops are hoped to be on hand and the arrival times of Breyman's and Warner's forces advanced to make a multi-player game more interesting for all. (Both side's reinforcements had actually showed up after the 1st battle was over, leading to a 2nd engagement on the same day ). The actual OB will be adjusted to accomodate what troops and which players do show up  with a some War of 1812 militia and Indians being called on if necessary.

Rebel Forces
The Rebels start with 3 Brigades and must deploy at least 1 at each of their entry points.

The Rebel goal is to force the British to retreat by shaking all of their brigades.
The British goal is to avoid being forced to retreat. If they can hang onto the corral full of cattle and horses as well then it is a major win.
Posted by Ross Mac rmacfa@gmail.com