The Battle of Rabbit Run - A Portable Civil Wargame 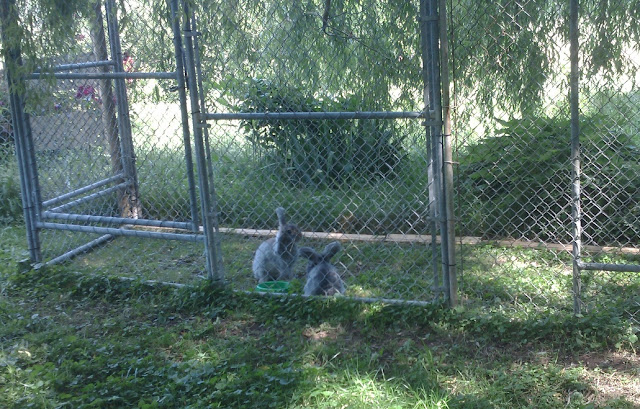 A picture for Dave, E-bunny and Xena Warrior Bunny, do their best to ignore the upcoming conflict at their very door step.

By the time Kathy had made her early morning departure (i.e. around 1:30 in the afternoon), any good intentions of getting some chores done had evaporated. All was quiet on the home front so I turned my attention to the  ACW troops. The latest plan for these 1/72nd armies is 3-5 stands per regiment for use with Tabletop Teasers.  I wasn't sure the garden table was big enough to handle the job so I started eyeing the spare 4x5 sheet of plywood in the garage and contemplating scenery. It was all starting to seem like a lot of work when suddenly one of those little cartoon light bulbs came on. The whole point of the portable wargame, or well one of the points anyway, was being portable! With the Hotz 3" hex felt and 1 stand per unit, I could fit a nice little game into a small box, take it out in one load and be under way in no time. All I needed was a scenario. 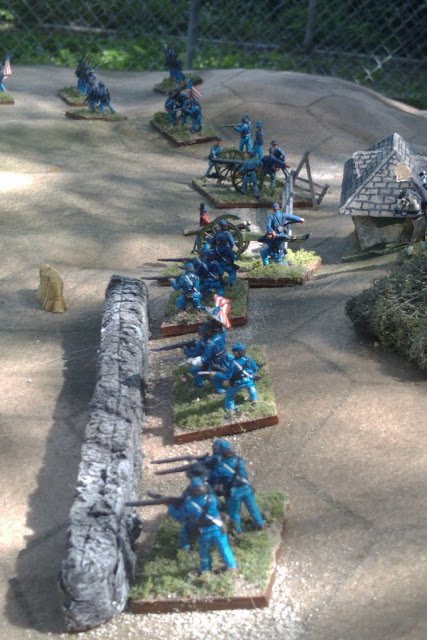 20 July, In a surprise move, the Rebs under General W. Rider have thrown a pontoon bridge over the Rabbit Run and entrenched 5 regiments of infantry plus a battery to defend the bridgehead..  General I Taleri with 9 regiments and 2 batteries has been dispatched to drive them back.  The terrain around the bridgehead was hilly with several small patches of woods. To the north the terrain provided a covered approach for the Union, a hill to the east provided an artillery position just able to reach the southern end of the Rebel entrenchments.   The rebel artillery was posted south of the river while 4 regiments manned the entrenchments with the 5th regiment being held in reserve.

The battle began with a lengthy and completely ineffective bombardment by the union artillery. Six regiments were dispatched to advance through the dead ground to attack the rebel left. Three regiments were posted on the left to threaten the Rebel right and to neutralize the Reb artillery. The boys in blue deployed into line behind the hill and woods then surged over the top. One volley from the ragged rebs laid low 50% of the attacking wave. The left flank moved forward, losing 1/3  of their number to artillery fire but managing to get close enough to shoot down the gunners across the river. The determined Yankee wheeled to the right to charge the redoubt  as the remnants on the right wing advanced and opened fire again, finally taking out a rebel regiment.. The rebel rifle fire merely increased in intensity, knocking out 2 more regiments  and forcing  General Taleri  to order the remnants of his Division to pull back and await reinforcements. (Losses: Union 6  out of 12 units, Rebs, 2 units out of 7 units) 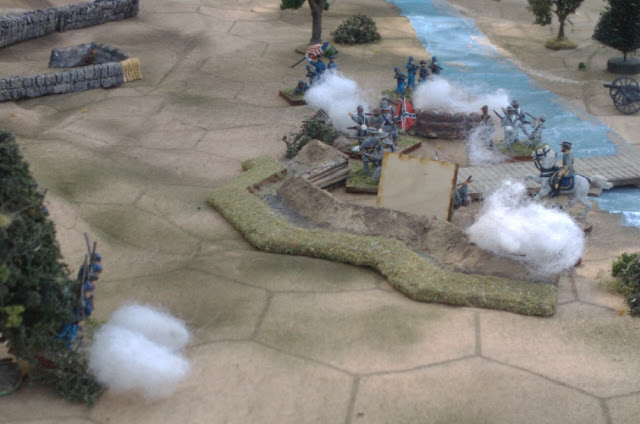 Mid way through the first game.
It didn't take long for reinforcements to arrive, This time, the artillery quickly found the range. The Federal left wing advanced but were unable to silence the Confederate guns. 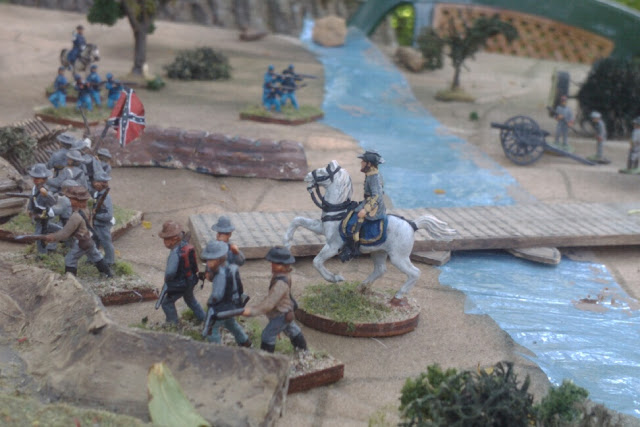 In the end, that didn't matter, the right hand regiments massed in dead ground, chose their moment then rolled forward. An ineffective fire failed to stop them and the garrison was shot down in short order, allowing the Federal infantry to occupy the trenches without opposition. (Losses Union: 3 out of 12 units, Rebs, 5  out of 6 units) 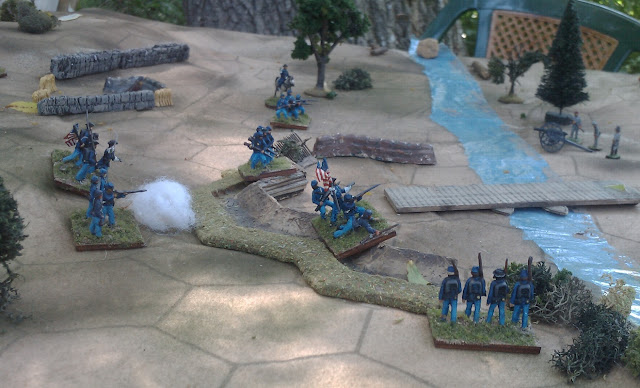 I actually played this game 4 times but only twice all the way through. The plan had been to bring on Confederate reinforcements but I cancelled them before they could get into action. I used Bob's musings on possible changes including a fire phase before the activation rolls, the simpler way to calculate activation points and the multiple pins. Actually,once I started tracking multiple pins, the question arose of whether the  fire modifier was -1 if pinned or -1 for each pin marker. I decided the latter made for a better game and adopted it. At one point in the third game, the rebel artillery had 5 pin markers on it, effectively silencing the battery even though the Feds couldn't roll  a 6 to save their lives.

Actually, the die rolling all afternoon was extremely skewed. In the first game, the rebs won every crucial initiative, getting in the first shot and then to add injury to insult, killed 3 Northern stands with their first volley of 4  dice of rifle fire. The union artillery on the other hand was unable to inflict any noticeable damage through 10 or 12 turns of fire by 2 guns.

For the 2nd game, I cut the rebels back to 4 stands of infantry and decided that since the rules are aimed at breechloading rifles of the late 19thC, I should downgrade the ACW rifled muskets to "other" firearms. This made a big difference to the feel as the armies were able to get quite close before stalling and.or dying. The artillery in particular benefited  as the infantry was unable to approach within small arms range without taking cannister fire. Since the reb artillery managed  to roll 5's and 6's with 2 out of 3 shots,   this was rather nasty. On the other hand, this time, the Rebs got the 1st fire but blew their shot at the Yankees despite the support of their General and were then overwhelmed  by the fire of the advancing  Yankees, losing 1 or 2 stands every turn even though 6's were needed. No one lived long enough to require any melee's to be fought.

I reset the game again using the 3 hex range but again the dice were lopsided, the Union guns,  couldn't hit anything. True, they did land 3 out of 20 shots into the compound but even with the +1 for the general, they only suppressed 1 stand, once. On the other hand the Rebs won every initiative which mattered, getting in the first shots and rolling about 30% 5's and 6's, slaughtering the bluecoats. It was Marye's Heights all over again. I finally stopped the game and reset the table with 9 Yankees assaulting 3 Rebels, no guns, no generals. It was a walk over.

During the first 2 games, I felt so frustrated that I started thinking of all sorts of modifications but eventually I decided that the extreme dice rolls were twisting things but as ever when dice are involved  will happen now and then and decided  that the real solution would have been a bugger game so that 1 or 2 rolls would be less crucial. Instead of 12 attackers facing fewer defenders, I should have fielded 12 defenders and increased the attackers to 24 or so.

On the whole, the new firing rules were a BIG  improvement but I am still wondering if the Pin rules are worth the extra hassle or if perhaps its just that the Pin is too easy to inflict. The one time in the game that I almost had a melee, 2 units vs a pinned unit in cover, I was disappointed that the pin did not weaken the defender in a melee. My troops stopped and shot.

I also find the artillery very frustrating. I'm thinking of an amendment along the lines of once a battery hits a target, further rounds will automatically hit the hex and the guns need only roll for effect until they switch targets.

The ACW and the PW will be back next week.