Once more unto the breach. The 3rd siege and the Relief (or not) of Adelheim 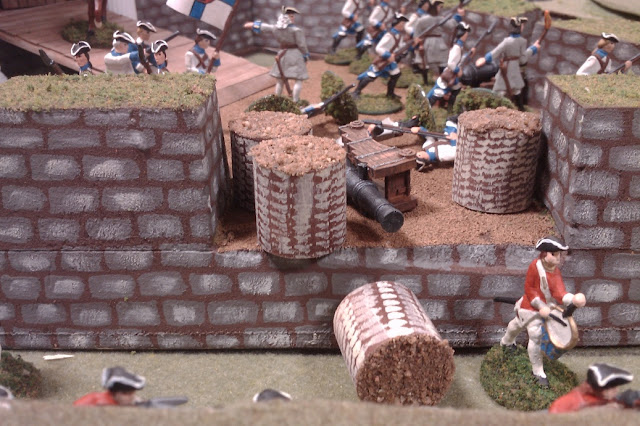 The sort of damage a Ricochet Battery can inflict. This also shows the sort of compromises that are often necessary when making practical terrain for 40mm games. The Ravelin needed a gateway, wide enough to admit a wagon. To include a gun port on the same wall would have threatened the structural  integrity beyond tolerated standards and so we simply sealed the gateway with gabions once the siege got under way. The gabions, by the way, are solid wood doweling cut to lengths with wicker work being suggested with paint and a coating of sand filling in (sic) for the earthen stuffing.

One of the things that happened to me during my solo test was that I placed the 2nd parallel too far from the fort, at a range where there was no serious threat of a sortie. When it came time for the 3rd parallel, either it would be too far from the covered way or too far from its supports. Digging 4 parallels would be time consuming and smack of not knowing what I was doing. I opted to go too far from  my supports and was hit by a sortie. Looking at the 2nd game, where the defenders hadn't chosen the location of the 2nd parallel, I realized that we had inflicted the same difficult choice on them, They had taken the same option as I did and suffered the same fate. Hmm How about that, again very simple rules gave the right results. The first team, those who had placed the parallel had chosen the first option and extended their siege by several days. When it came to the 3rd game, I suggested that we push the second parallel forward slightly and let them start from there.


The 3rd game proceeded smoothly with the attackers advancing methodically, alternating batteries with partial parallels and giving the defenders no opening for a successful sortie. At last the 2 armies were entrenched within a grenade toss of each other. It was time to "crown the covered way". The front parallel filled with troops and at the assault went in. 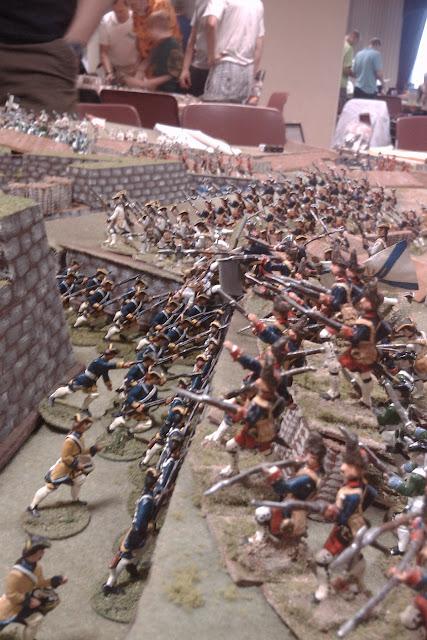 Losses amongst the infantry on both sides had been relatively light to this point and the resulting battle was fierce and bloody. The attackers were not successful every where but they drove enough of the defenders back that they were able to rally then storm two of the redoubts. 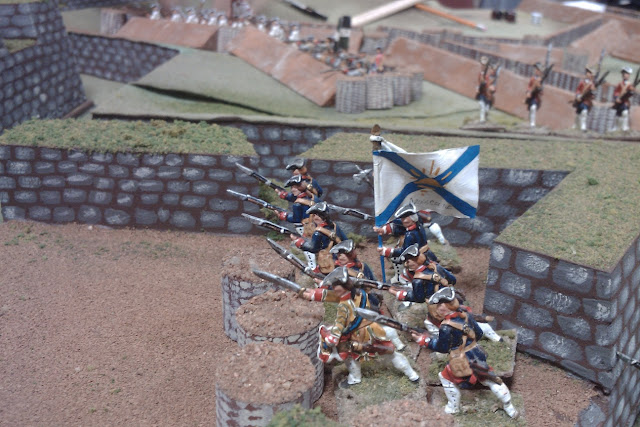 On the next siege turn they succeeded in digging breaching batteries into 2 of the redoubts and alongside one face of the Southern bastion. At that point, time was up and we decided that if the fortress was not relieved, it would have to surrender. 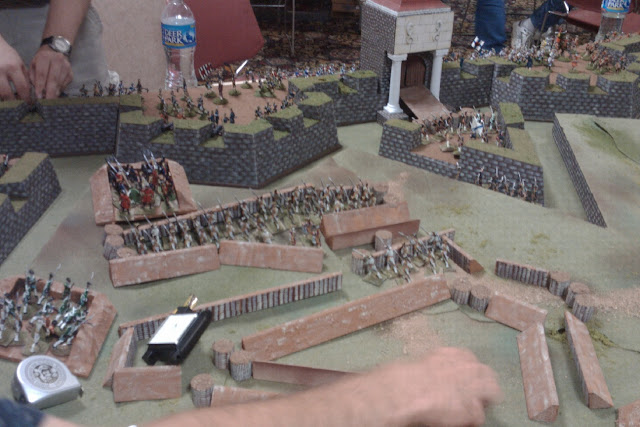 We cleared the rear 1/2 of the table and set up a prison depot for prisoners taken during the storming of the covered way and a small supply depot. Four squadrons were deployed to defend the depots and 1 company of infantry split between the 2 compounds as a garrison. Two additional companies of infantry were detailed  to march from the trenches as a reaction force.

The relief force, an advance guard presumably, was composed of 4 squadrons of cavalry and a light infantry battalion. Their goal was to free the prisoners, destroy the supply depot and inflict more damage than they suffered. The more of these tasks that they accomplished, the more likely that the siege would have to be broken off.

We weren't sure that this was a large enough force but a very interesting little game ensued. 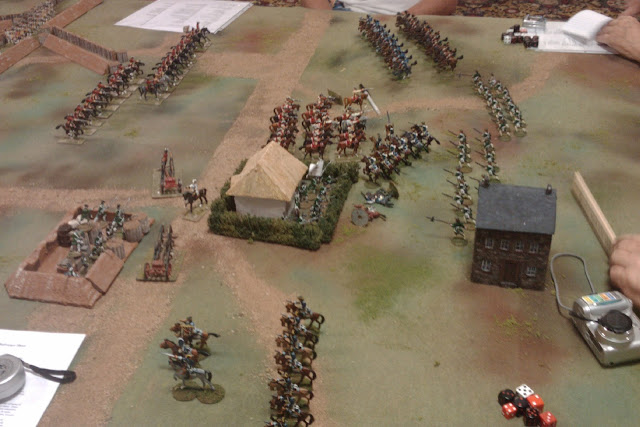 The relief force caused itself a little trouble by having a squadron ride between the light infantry and their target, the prisoner compound, and then back again, but they managed to throw a squadron of heavies against the heads of two  columns of  light cavalry. After 2 turns of melee, the light cavalry which had been unable to exploit their numbers, were defeated and removed from the game for 3 turns. Beyond them a series of charges between the Allied Hussars  and Fitzjames Horse finally resulted in the Hussars being driven from the field.

Once the way was clear, the light infantry showed its worth by shooting up the garrison until it was understrength  and had to retreat. Unfortunately, the time lost meant that supports were entering from the back just as the jaegers went in the front. An even melee resulted in the light infantry being narrowly evicted.

A squadron of cavalry, slightly weakened by previous shooting, now tried a frontal charge on the remaining company of infantry. A risky business but necessary. The infantry won the toss, fired at short range and fired well. The cavalry did well in the melee but only well enough to draw. They pressed ahead and were suddenly  faced with overwhelming numbers of infantry. By the end of the melee they were understrength.

It was all down to the light infantry. As they deployed to fire on the cavalry, a squadron each of the rallied Carabiniers and Fitzjames Horse crashed into them. Firing high, the light infantry broke and ran. There was to be no relief for Adelheim. 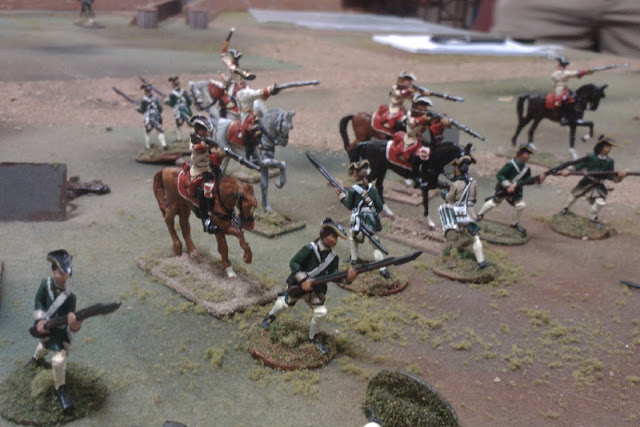 So that was it, another HMGS con over and done. I greatly enjoyed my part in this series of games. Many thanks to all those who played and to my comrades in arms who worked so hard on the fortress and on running the game. Discussions are already underway for next year. The NQSYW may appear again, then as well as before, but look for pikes and cannon the next time I head south.
Posted by Ross Mac rmacfa@gmail.com