A Nest of Renegades

Dashing Assault on a Nest of Renegades

We have just word of an attack by Her Majesty's troops on Nevaneva, an outpost of the  Brethren on the south-east coast. It is well known that there were ties between the anarchist rebels along the Blue River and the  Brethren and therefore it was not surprising that reports had been received that numerous rebels had fled there after their defeats at the hands of Royal troops. It was high time for this mix of Rebels, Renegades and Raggedy Pirates be taught a lesson.

We set sail from Newport just after dark on the last day of the month. While it is barely one hundred miles from Newport to Neva Neva by land, across mountains and rivers through unfriendly territory, it is nearly one thousand miles by sea up the West Coast, around Cape Kyuquat and south through Aktif Pass. The tides and current in Aktif Pass are ferocious and without a good native pilot, we had to forego the Inside Passage and sail south around the outside of Haida Guay, and up past the main Brethren strongholds.  (see atlas)

The Commodore arranged for us to pass Freedom River at night with the steamers towing the troop transports when the wind was unfavorable. It was too much to hope for though that we  would escape undetected and no one was really surprised to see  a line of entrenchments from the river bank to the hills. The land along the river is quite flat and from the pilot house  we could see clearly 5 batteries of guns, no doubt landed from the pirate fleet, in addition to a battery in the old tower that guarded the main harbour. There were a hundred or more armed men manning the fortifications or milling about behind them and no doubt hundreds of their savage allies haunting the woods. There were rumors that General Paz with the whole of the San Carlos army was also present but few gave it much credit. 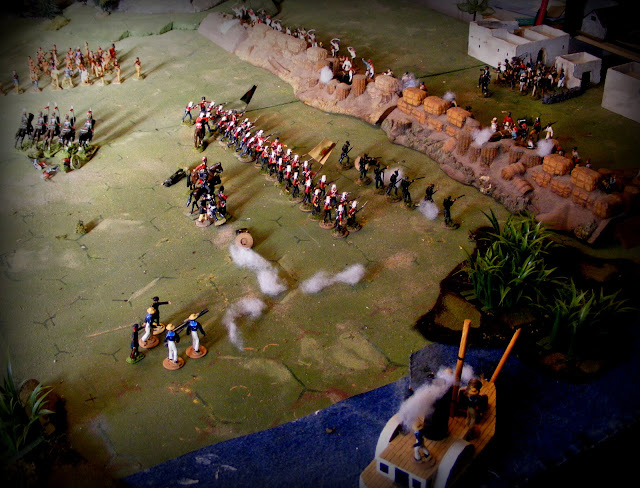 Her Majesty's redcoats advance rapidly across the plain under a hot fire from the defenders artillery while rocket's and mortars shells arc over head.

To storm this fortress we had no more than fifty of the Queens infantry from the Victoria Rifles, Young Buffs and Green Tigers as well as five of the Company's lancers. The Commodore ordered a landing party to take a battery of light rockets with the troops and assigned the Reuse, who had been rearmed as a Bomb Ketch, to act in close support. General Turner was in over all command of the land force assisted by Brigadier Stoneforte in charge of the infantry and by Director Legge of the FTC acting as ADC and second in command.

The troops landed and formed  up outside cannon shot of the fortifications and advanced rapidly under a heavy and accurate fire with a skirmish line of riflemen leading the way. As expected the woods soon  sent forth a howling horde of savage Atlantican warriors against the flank of the advancing line but the Lancers trotted forward to face them. As the red line neared the breastwork, the General and Brigadier each put himself at the head of a regiment and with a loud huzzah the line rushed forward without firing a shot. A shower of grape left the glacis covered in dead but the red line went up and over the top. Minutes later we could see the flag of the Buffs waving triumphantly from the  battery nearest the river. 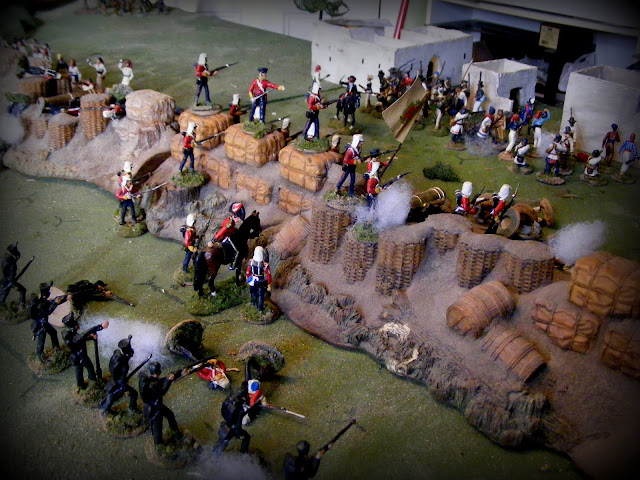 The Buffs with General Turner at their head capture their portion of the redoubt after a stiff fight.

At the sight of this triumph, we set up a cheer, a cheer stifled moments later when the Tigers  came bundling back over the barricades surrounding the central battery. We held our breath as a shockingly small band rallied on the plain with the Brigadier boldly exposing himself at their head but the guns had been silenced and the enemy must have been badly cut up as well since they seemed content to snipe at the Queen's men.   On the plain the natives seemed encouraged by this and pushed forward but up galloped our cavalry, pennants fluttering as they lowered their lances and charged. We expected them to sweep the savages away but these fierce warriors are not easily cowed and their fire caused shocking casualties as the lancers closed.  After a short tussle, we could see a handful of lancers rallying back to rest their horses and reform but the enemy seemed unwilling to advance and risk another brush with those riders. 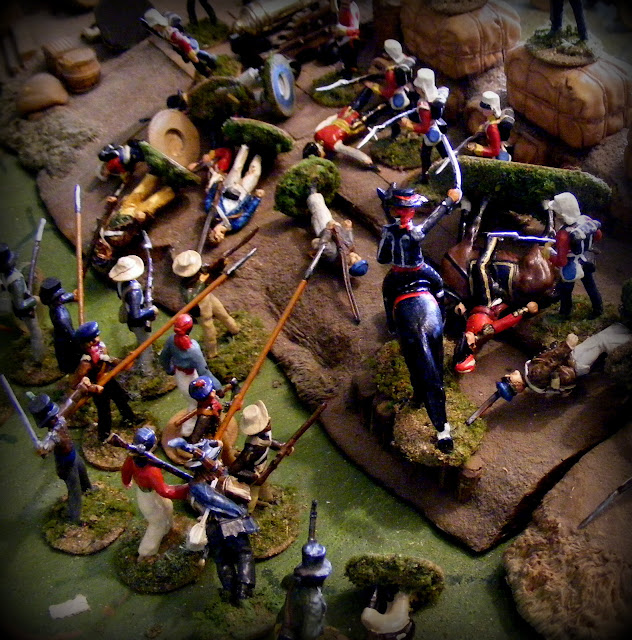 It was hard to see what was happening beyond the redoubt but as the Reuse, having silenced the improvised shore battery,  warped up the river to engage the tower,  we were just able to see the shoulders and head of a horsemen in black and the tips of the enemy's pikes and flags. With a roar that we could hear over the rattle of musketry, the enemy surged forward. For tense moments we could catch glimpses of a prolonged struggle but at last the enemy receded followed by the Black Rider. Minutes later there was a stir and we could see a small party coming slowly, carefully, back out of the redoubt though the proud flag of the Buffs showed that they had held firm.  Focusing our glasses carefully we could just make out that they were carrying a wounded officer. From our friends in the Buffs we later learned that General Turner had met this Black Horseman in hand to hand combat and been bested! From captured pirates we first heard the name Peter Iberton, the Fox as they call him, a new leader who has risen amongst the Brethren. 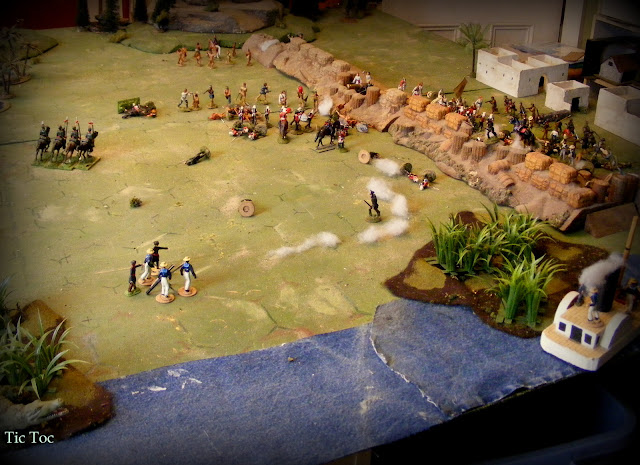 An over view of the climax of the battle.
(by special (implied) request for those who look carefully)

For a few minutes our troops seemed to be paralyzed but soon Director Legge could be seen galloping to the front and runners could be seen heading out as the army pulled itself together.  For perhaps half an hour the battle seemed stalled as both sides traded musket fire and gathered themselves for the decisive struggle while the Naval Brigade and Reuse pounded the tower. The Rocket battery proved especially effective, knocking the battery for sixes despite various rogue rockets which went sputtering off. Luckily the latter did not hit any of our men though there were some close calls, one landing not a fathom off our bow. 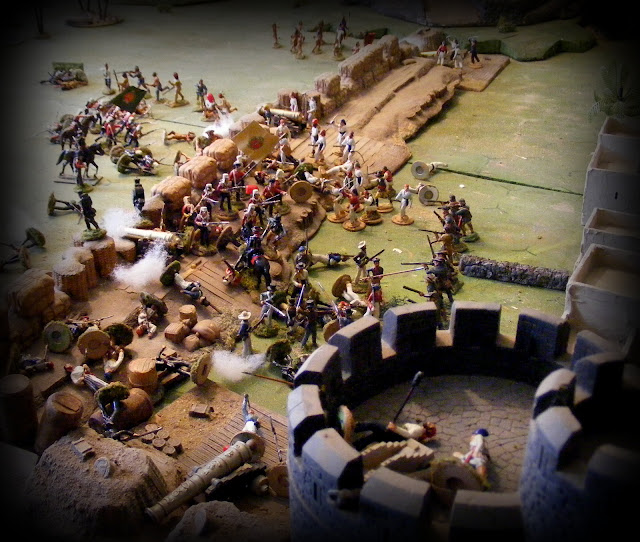 At last the storm broke. With a degree of co-ordination not often seen amongst such rabble their whole line attacked. On our left the Tigers were nearly overwhelmed but inspired by the Director they held and the tide of native warriors receded. Beyond the redoubt we could almost feel the roar as the enemy surged forward. The rattle of musketry rose to a crescendo and the last handful of the Victoria Rifles were driven back into the plain. Onward surged the rabble, that Black Rider at their head, and for a moment we feared the worse for should the Buffs be evicted, there was little hope that they could storm the entrenchment again that day.

At last however, the storm wore it self out against the Breakwater of the Buffs and the enemy broke. Scattering like leaves they fled to the woods and hills, leaving but a handful of snipers to cover their retreat. Gathering up the dead and wounded,  we set about slighting the tower and destroying the wharves in the town. The ships and any goods of value had been removed before our arrival but it was a lessen these ruffians will not soon forget. It had been a near run thing though and I doubt that any troops less experienced and dedicated than these could have won that fortress against such odds. These Pirates and Savages and not a few of our own exiled Rebels seemed to have new resolve and I feel that we shall see this Peter Fox fellow again. 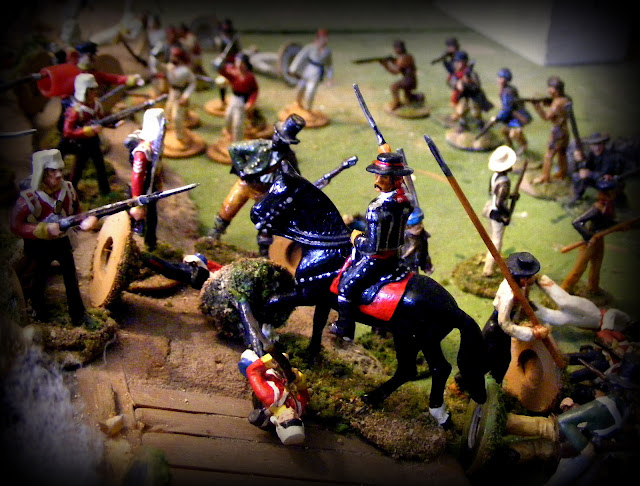 Ed note: A military analysis of this action will follow in a day or 2.
Posted by Ross Mac rmacfa@gmail.com