Its funny how things go sometimes. When I started laying out this past game, I had very low expectations. There was a low figure density, limited tactical options and I had no back story to build around. So I started hauling out figures and then just followed the little inner promptings. By the time the game was well under way, I not only had a back story start to develop but it looked like I had backed into solutions for several questions that had been dogging my fictional setting and associated campaign for years. But more on Atlantica and on how the positive ripples from the clarity will benefit the card table game in a later post, let me go back over the game, what actually happened and how various things worked.


The rules were the 2013 edition of With MacDuff To the Frontier. Here are the OB's and ratings used:

Brethren of the Coast 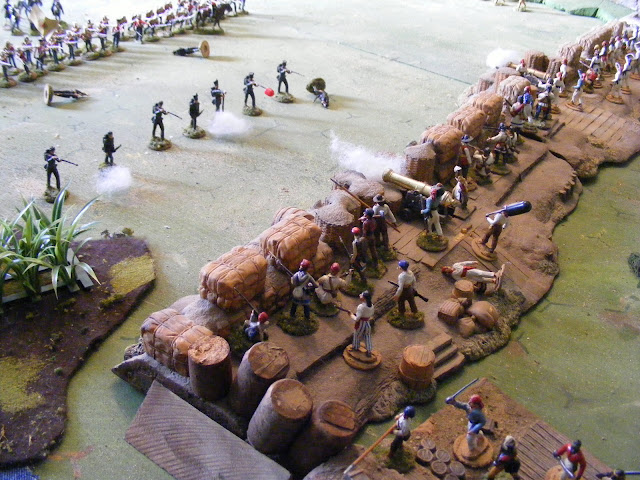 For Jeff, another view of the table as the Queen's troops advance.


The Battle and how things worked.

The game started simply enough with the Redcoats deploying into line just beyond range of the enemy artillery and advancing in line behind their skirmishers with the rocket and mortar firing overhead. This immediately brought up an issue as the wording of the overhead rule had not been harmonized with the changes to the fire chart so it said that the target would be counted as a difficult target but there are now 3 difficult targets rather than one. The same change, intended for proper fortifications accidentally lumped these and fieldworks into one category making the improvised barricade tougher than it was meant to be. I downgraded it to "cover" as intended and carried on but the language will have to be fixed.

I also ran into a small issue with the mortars. Its been a long while since I used them under MacDuff (if I ever have) and the long range of 24" with no short range suddenly seemed very short and 2 dice of firepower very inadequate for the work assigned to it. I decided to see if classifying them  as Superior would help balance the lack of short range (ie canister). It did but  made them a rather hit or miss weapon which felt right.

There was a different issue with the Riflemen, I had gratuitously granted the Riflemen  "sharpshooter" status giving them a +1 for Superior firepower when shooting. They were rolling 2 dice per turn with a 5 or 6 being 2 hits and a 3 or 4 being 1 hit (1/2 casualties for troops in cover). On average they scored something like 1 hit every 3 turns. No sharpshooter status for them next game!

As the Queen's troops advanced the rebel guns took what seemed like an awful toll. They at least had no problem rolling 6's. Having survived 1 blast of close range fire, the line was just outside charge reach meaning 1 more blast plus another when they charged. I began to worry if the scenario would work. Luckily I remembered the "Follow me" rule where by a commander can join a unit and add d6" of movement, taking his chances if they take fire. It was just enough to get both units into contact and the  Pirate artillery rolled down for once. Each regular unit was fighting 2 enemy units, a gun and a unit of infantry. For a few seconds I felt a wave of nostalgia for the old individual melee combats but it would have been miserable trying to pair up figures over the terrain and as it turned out the system borrowed from HofT worked just fine. Even with the defenders suffering 1/2 casualties the Buff's broke their opponent during the 2nd round of   melee and were able to occupy the position. The Tigers had a problem though, they took out the gun crew in the first round but not the infantry and they had taken heavier casualties than the Buffs. A quick calculation showed that while they might do it in a 2nd round a tie was more likely and being broken themselves was a distinct possibility. Therefore they chose to retire rather than fight a 2nd round.

So far so good, it was a little sticky with a shaken unit of infantry with defended earthworks to their front and 2 units of Indians bearing down on their flank but the Lancers were there to cover them. It was now the defender's turn. (Turn 5 I think). The Indians came forward and fired at the Lancers who launched a reaction counter charge. 5 cavalry charging into 10 infantry was slightly in the cavalry's favour but 1's are no match for 6's and the 1st round was a draw. One Lancer had been lost to shooting (against the odds) and another in melee. They weren't Elite so the next hit would break them. The Lancers declined a 2nd round and pulled back. At the same time, the Fox led a counter attack and fought 2 rounds of melee with the Buffs getting the better of it and the Irregulars recoiling but not quite breaking. However, during the 2nd round, the die rolled for the Fox inflicted a hit while the die for General Turner came up "wounded". Technically there was no connection between these two events under the rules but the rules deal with outcomes not events and I do hate to pass up a chance to add narrative so a duel between opposing commanders became the story. Now Faraway had a problem, units out of place with morale teetering and no General so no orders dice, thus no rallying or turning to face.

Here is where the command differences came in. The Brigade Order rule had allowed the regulars to advance with minimum usage of Orders while the ADC allowed them to store unused ones for later.  When a General is wounded he does not get an Order roll on the next turn however if his ADC is still storing some unused orders they may be used, thus a regular army is affected but not necessarily paralyzed by the loss of a general. Faraway had enough stored orders to rally the Tigers and Lancers and brace themselves but the Pirates rolled a 1 for orders. Not much of a counter attack. By the time it came the Regulars had recovered, the 2IC had taken over and all units rallied, well apart from the Riflemen who stubbornly refused to rally either. No elite status for this unit next time! Of course they are named after a Montreal Militia unit.

While all this was going on the rockets and gunboats had advanced and opened fire on the tower since their own men were too close to the enemy to allow overhead fire. At 1/4 casualties this should have been tough, especially since the Superior firepower mortar had a hard time getting any hits in the 2nd half of the game, 3 seemed to be the highest number on their dice. The Rockets had been spewing rogue rockets left and right, luckily  not hitting any of their own, but once they set their sights on the tower battery, every rocket hit with the occasional 5 being the lowest number!

A few turns were spent with the Brethren bring up reinforcements and using skirmishers to wear down the Queen's troops. At the start of their half of the 8th or maybe the 9th turn, (I forgot to track both turns and time) the Brethren had lost 5 out of 11 units (4 of these being artillery) and the next loss would break the army. Faraway had yet to lose any units but 4 out of 6 were very close.  Everything was in position but for maximum effect they needed at least 3 orders, they got 5 and in they came. The attack by massed natives on the Tigers was nip and tuck but was repulsed after 2 rounds of melee with the Tigers being left 2 figures above breaking.
The first attack on the Buffs was also repulsed with losses but Rifles broke on contact allowing the Fox to lead a pursuit into the Buff's leading to a 3rd round of melee. It was a long shot, needing the Buffs to whiff and the attackers to roll Boxcars, but it was a little nerve wracking for a few minutes. The Buffs of course held, 3 hits above breaking but the Brethren  broke taking the army with them. 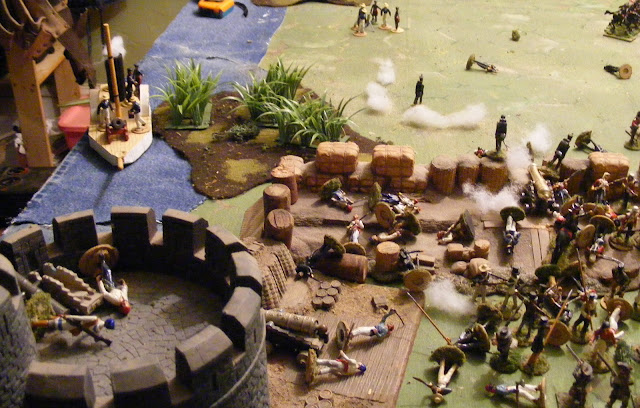 The Reuse had to steam onto the table to bring the mortar into range.


If the attackers hadn't been both Elite and Shock troops, I don't think they could have made it, not without at least another battalion of infantry. Every one of the infantry units had taken enough hits to have broken an average unit not counting the extra hits that had been rallied. In case the 1:2 odds in men and guns look steep for an assault on a fortification, they are basically what the British faced at Tel El Kebir and at various Sikh War battles and that was something else I wanted to test.

From a Solo gaming perspective the game went really well. Once again I set this up so that I could play against the game to win or lose rather then just watching two sides as impartial (figure) mover and (dice) shaker. Despite having half expected the game to be a slam dunk, I twice found myself scrambling on the edge of defeat so from a purely game POV the game delivered just what I asked. I was also pleased that the rules again delivered the sort of game I wanted to play with actions and results that felt right and with a good mix of decision making and uncertainty or chance.

Email ThisBlogThis!Share to TwitterShare to FacebookShare to Pinterest
Labels: Brethren of Coast, MacDuff