Having decided to play a wider variety of card table games this winter, and having just rebased all those ACW figures, I found myself eyeing in near despair the number of 25mm armies now based on 40mm or 80mm wide bases, which don't fit the 3"/76mm wide squares. I had tried 4"/100mm squares but there just wasn't room for enough squares on my board. I really didn't feel like doing any more re-basing, especially of recently re-based armies! Really didn't!

Suddenly I remembered the canvas grid I had done as a travelling game board for my RCW figures. The grid on it was sized to fit the base on my tchanka, 9cm!  A few minutes of testing determined that it would work with any of my existing armies in every scale and that an 8 x 10 square grid would fit my card table board. A few  minutes later with scissors, the roll of excess canvass, felt pen and paint, and I had a mock up of a new card table  board. 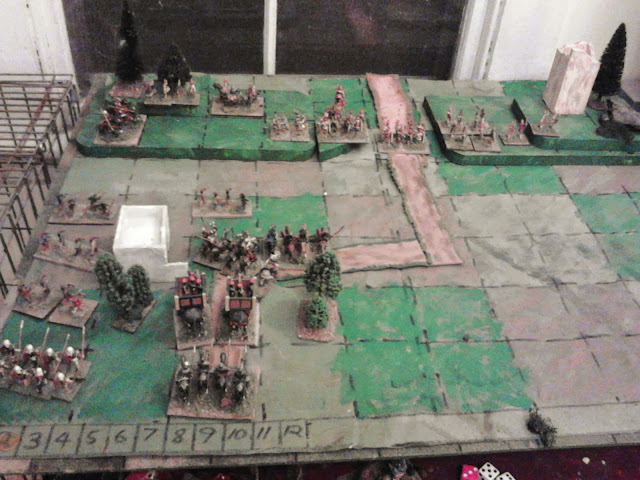 The Turanian hosts of King Rossius the Unknown approach a pass held by Queen Sharazhad of Marakanda with a small force. (coming soon to a Gathering of Hosts near you)

Needs a bit of work on the graphics to improve the look but it was cheap and easy to make. There is a big roll of canvas in the cupboard and I can see me doing a bunch of these, an Autumn board, a Winter board, specific scenarios or historical battle boards with appropriate painted rivers, roads etc., and no need to rebase any of my current 25mm armies! Win, win, win!