When November 11 comes around, I usually think of other generations. My grand father who served in WWI, my dad and uncles in WWII, and for the last decade the men and women young enough to have been my kids who have put themselves on the line in Afghanistan.

After all, I was never asked to put myself in harm's way. The nine years I spent in uniform saw the end of the Viet Nam war and the Cold War thawed into a hockey tournament. It was another 9 years before the Berlin Wall came down and pundits announced the "end of history" but at the time it seemed clear that we were heading that way. The worst trauma I had to face was finding out that, on the whole, I really wasn't very well suited to my chosen profession. 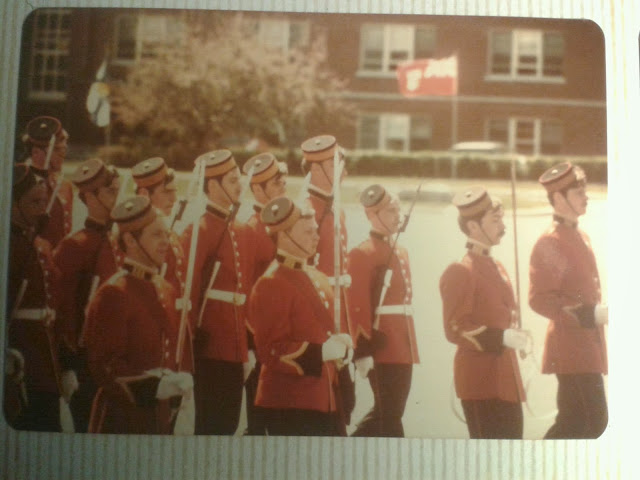 The class of 1977 at the Collège militaire royal de Saint-Jean.

Last night I was watching a documentary on an episode of the Canadians who held open the airport during siege of Sarajevo so that humanitarian supplies could get through and it occurred to me that while I may not be a Vet (in the usual sense), no one ever pointed a gun at me or put me in a position to take life or bear witness to atrocities and the horrors of war, especially civil war, nor did I lose friends or men under my command in action but there are those of my generation who did, including former classmates, friends and cousin.

In some cases I've heard small bits of the experiences of this one or that one, close shaves as peacekeeper in Syria that my cousin John turned into amusing stories, a former classmate telling about coming out of a negotiations with one side in Cyprus to find that his driver had been shot dead, a friend talking about the tedium, heat and periodic life and death tension of enforcing a blockade in the Gulf, another skirting over the horrors of the former Yugoslavia that don't go away easily. I didn't stay in long enough to be asked to go and that's probably best all around but they went and we should remember them too.

Email ThisBlogThis!Share to TwitterShare to FacebookShare to Pinterest
Labels: remembrance