That's the sound of me striking while the iron was hot.

After several pleasant hours perusing on line hobby shops, manufacturers sites, PSR with stops at Wikipedia (there are limits to how far I'll go to research imaginary countries) to check who, what and where on various tanks and weapons and on various available models, crossing referencing it all with "the plan" I came to a very odd decision (for me): Stay the Course!

At this point I remembered that 3 years ago I had been thinking about a Post WWII Western Allies vs USSR confrontation as well as fictional 3rd world countries and that all of my existing models (as opposed to actual toys) are of that 1945 - 1965 era. One of my first two Airfix sets was the WWII Russians (the other was ACW Rebs) and while browsing I was surprised to see that these have finally been re-released but I decided to save that treat for later. Stay the course!

So, before branching out into new, exotic equipment and uniforms, I decided to fill out any exiting gaps and at the same time make some rough decisions on unit/game organization/period going forward. Some more experimentation has confirmed my feeling that a  5" grid is the optimum size for my main table.  Hexes are tempting but for ancients and horse&musket squares just seem better and hills are easier to make. I can always throw a hexmat over the top if the squares don't work. I will be able to fit 2 tanks or artillery pieces and 4 infantry stands into each hex or square so I will need to reorganize my existing armies and build with that in mind. In the short term, it is of course possible to play with 1 gun/tank and 2 stands of infantry, the battlefield will just look a little more empty which is not wrong. 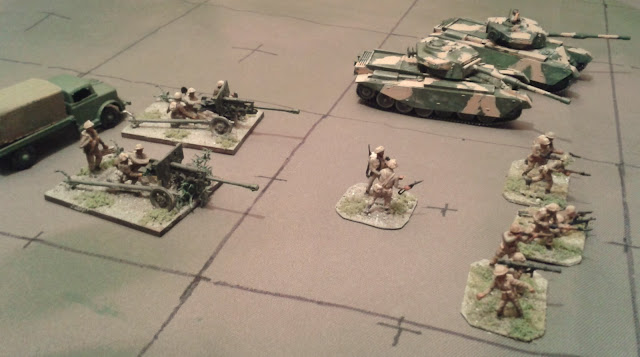 This is actually a 6" test grid from 3 years ago but you get the idea. Extra points for anyone who recognizes the make of the grenade tosser closest to the camera. He has a set mate on the next stand as well.

Going back to the tanks on hand, I found the 2 large & very toy looking dollar store T62's which may be safely ignored except as the stop gap measure that they were bought to be, 2.5 Airfix Centurions (how in heck does a tank locked in a box lose its turret??? Must be in the cupboard somewhere otherwise I may have the start of a bridgelayer), and 3 MRC/Easy Model plastic pre-paints; 1 Pershing, 1 T34/85  1 M4A3E8 'Easy 8' 76mm Sherman.

Now as far as I can recall, the tank that came with my Mini-Marx playsets was based on the Pershing so it had to be "in", being completely authentic for both this period and my past. The T34 & Sherman both saw extensive service post WWII, in Korea and with many minor powers, so they made sense as well. So I ordered 1 more of each of these from Michigan Toy Soldiers to give myself units of 2 tanks of the same type and make. Ooops! Over my original budget already and I'm not done yet!

On to infantry. I actually have more of the figures I used for the Roscians upstairs but they are still unpainted because while there were good figures in every set, I wasn't completely happy with any of the sets for various reasons, too big, too modern, something about some poses etc etc and anyway, with 4x3 man stands per infantry unit, I'll have to more than double the infantry in both armies. I decided to have another go at ordering the apparently tiny CTA re-release  of the Herald Khaki infantry. Since I had had some of the Lilliput version and some of the Giant knock offs as well as the very similar larger Crescent figures, they are again absolutely accurate for recreating my past. (and should allow me to let the 1950's 54mm's go thus making life easier.

A box of Hat British mortars was added with an eye to doubling the number of models on table as well as to provide some heavier, more HQ like, radios and last, but not least, a box of the new Airfix WWII British, partly because they match some of the existing Roscian infantry, partly to reward Airfix for releasing a new set but mostly because I liked the look despite the negative review on PSR.

OK time to put the moderns away for a week or two. Next up, time give for my 40mm semi-flat NQSYW guys to CHARGE! before the year ends.

Email ThisBlogThis!Share to TwitterShare to FacebookShare to Pinterest
Labels: 1/72, modern