Having laid out the terrain and selected troops, I turned my mind to improvised boats and the scenario rules for  crossing the river and bringing on reinforcements, neither of which were written with a Memoir style card activated system in mind. It was while I was playing about with bits of wood for boats that I looked at the size of my slightly over sized $store T62's and thought "This is a problem!". There was no way my mind was going to be happy floating a tank, that didn't quite fit into a hex, across a river on a little wooden barge.

So, I took a closer look at the scenario crossing rules. The scenario calls for enough boats to carry 3 units at a time, 1/2 reach the water on turn 1, the other 1/2 have to be carried at 1/2 infantry speed without specifying distance or infantry speed. Once at the water it takes 1/2 a turn to load or unload and a turn to cross. or in other words turn 1 load and move to mid-stream, turn 2 land and debark, turn 3 boats return and the sequence starts all over. There is an added complication of current but essentially every 3 turns, 3 units can cross, or an average of 1 per turn over the length of the game.

I  hadn't made any boats yet but I already had a pair of small pontoon bridges in the drawer and the decking was just wide enough to hold a pickup truck or a T34/85. I did a quick equipment swap and decided that the engineers would build the bridges overnight, ready for crossing when the game started. Each bridge would be allowed to hold 1 unit at a time. A unit entering the bridge would stop in the middle and on its next move would stop when it stepped off the bridge. Assuming a player had 6 orders available each turn he could, theoretically move 2 units across per turn and expand the bridgehead fast enough to make room for them but, in practice, an average of 4 orders/on the move allowances would be high so he'd be luckily to sustain an average of 1 unit per turn. 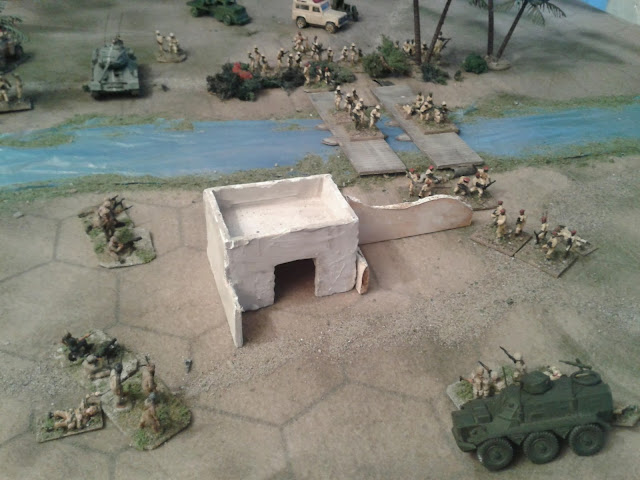 The Lion Brigade commandos (Red Berets) establish a bridgehead in the face of mounting opposition.

Reinforcements are also tricky, the book suggests having the GM roll 2 dice for cavalry and 4 for infantry and artillery with the total indicating the turn of arrival. Assuming an OSW 20 turn game this means the faster troops will arrive at some point and the others probably will but might be too late.  Ron and I have been allowing players to bring on reinforcements using the "on the move" option only. I decided to supplement this by rolling a die with the unit symbol indicating what kind of unit arrived, if any. This actually upped the odds of infantry arriving early but perhaps they are debussing from trucks on the edge of the board? The game isn't over but the method has worked well despite the Roscian commander's alarming knack of rolling flags and crossed sabers for reinforcements.

One last note, I decided to restrict the NPC to drawing 3 cards each turn to form a hand, 4 cards seemed to always allow a good  card while 3 reduced that to just usually. Since the player side was being played normally out of a 4 card hand it seemed to balance out giving me as player a challenge, several times not having a useful card while the enemy was never without something. Just enough of a challenge to keep my interested piqued.

On to the game.


The Naryatrian Commander had honour of first card. As he drew his first hand, up popped a Bombardment card allowing each battery to fire twice. The perfect way to start an attack!  It was particularly  useful for the Big Guns  who each managed to register a target on the first shot, increasing the effect of the 2nd shot. Ouch! On the next turn the Naryatrian infantry began to surge across the bridges while the Roscian defenders began to move forward to contain the bridgehead. After some fierce fighting the support of the attacking artillery was key  and the defenders were driven well back allowing  the attackers to establish a bridgehead and start bringing up armour and artillery support to sustain and expand it. 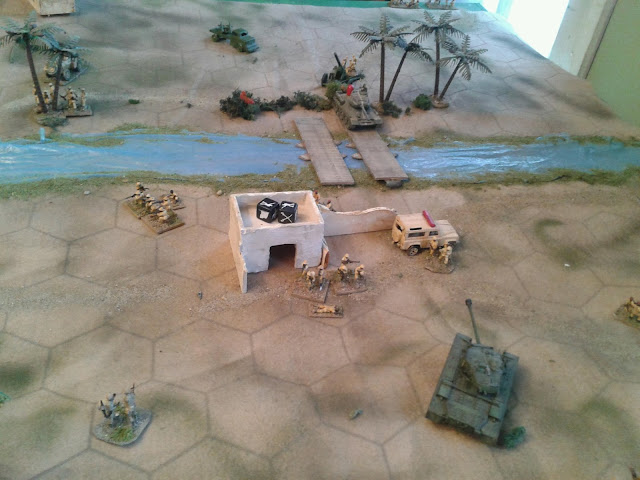 Pershing vs T34/85, a pairing that usually didn't go so well for the T34 in Korea. The T34 has just scooted back to safety.

The Roscians were well spread out and handicapped by having only 2 commanders on board making it hard to make use of some of the better cards in my hand. Reinforcements were slow to arrive and the initial attempts to stem the flow over the bridges were driven back with heavy losses. Initially most units were forced to retreat rather than being destroyed and the HMG units gave an especially good account of themselves in return. None the less, as the attackers kept up the pressure, units began to disintegrate. After about 15 turns the bridgehead was secure, the attackers had almost  secured the farm on the defender's right and with a breakpoint of 9 losses, the defenders had lost 6 while only inflicting 2. Things were looking bleak for Roscia.

At last though, reinforcements began to trickle in, including the overall Commander and the Naryatrians variously had pushed units beyond their command control ranges or ran low on good cards. (Using those Tactical cards to push ahead does have its downside when they don't include Commanders!) A combined tank/infantry counter attack backed by mortar and recoiless rifle fire began to have an effect but the T34 unit seemed to be adept at shooting and scooting and twice escaped destruction by retreating onto and even over the bridge! (ie the Pershing rolled a lot of flags when shooting at the T34, it didn't help that early on I kept forgetting that the gun symbol was the equivalent of a grenade and was supposed to hit anything.) The 2nd counter attack had stalled. 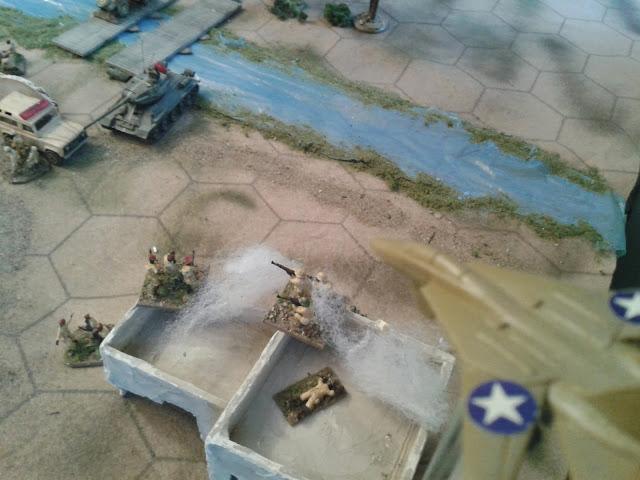 Air support! The RRAF drives the invaders out of the farm!

Suddenly,  out of the blue came a roar of engines and a smattering of dice hit the farm which the Naryatrians had occupied. Casualties were light but the soldiers panicked a bit and evacuated the buildings. (More flags!)  A pity that the attackers had spread out and were no longer bunched up in the bridgehead!

Reinforcements continued to pour onto the table though and at last even the trundling Centurion  showed up. As another combined arms counter attack rolled forward and the leading edge of the Naryatrian attack was wiped out or forced back, the Naryatrians seemed uncertain and their efforts dwindled to some long range, cross river fire from the technicals and artillery on their right. (The cards ALWAYS even out if the game goes on long enough, or almost always anyway.)  A sudden barrage from some off table 155 mm guns (barrage card) suddenly settled the tank duel but the counter attack continued, one shot from the Centurion settling the T34. 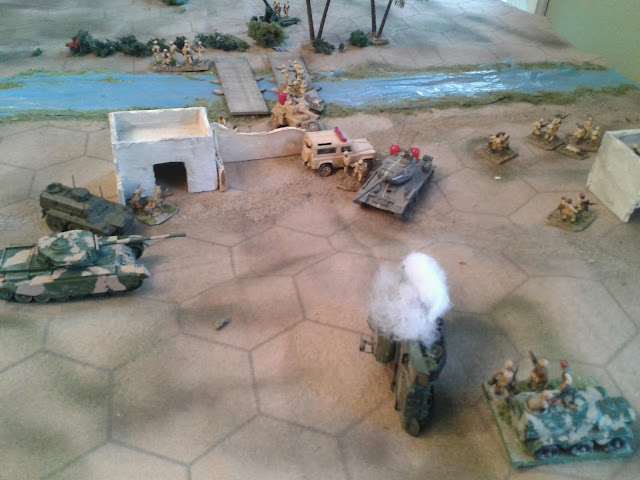 At 22 turns in, with the score now 7 to 6, still narrowly in the Naryatrian's favour, my time was up! I'll probably finish tomorrow morning unless I can sneak back up to my room for 1/2 hour or so after supper. Victory hangs in the balance!
Posted by Ross Mac rmacfa@gmail.com