There is still time.

Twelve sleeps till I leave for Fall In. Six houses to finish plus six more to refurbish, a gun boat to equip (and hopefully crew), and some board fences to build. No problem. At least Rob already has all of the figures we'll be using including my Fraser Highlanders.

The houses are being made from foam core and cardboard in the mode of the Stone House often seen on my table but using the smaller foot print of the revised version which I have adopted with an eye to my smaller table and 4" grid. The basic technique is a slacker's version of the Major General's technique. I've had the idea and materials since I built the Stone House but have been stymied by not knowing just how I wanted them to look and what size to make them.


Earlier this year I resolved the size issue and the decision to run this rural Quebec 1759 game decided the look for me. I'm reasonably familiar with the look of 19th Century Quebec urban houses from observation and from looking at prints of the 1837 rebellions but rural Quebec in 1759 is less familiar. Enter the internet which was quite helpful, especially this page on architecture in New France.

As with many things there was no universal pattern and houses built in the late 1600's and early 1700's would have been more primitive and European peasant like just like later ones would be more likely to be stone even in rural areas.  The basic structure would made with vertical posts and either horizontal or vertical wooden boards or a mix of wood and stone fill but usually covered by some form of plaster to keep the wind and snow out. Any one who has experienced winter in Quebec or New England will appreciate the need to block the cold north wind in winter from blowing snow and cold through any chinks in the wall. Windows would be few for the same reason unlike later homes when glass was more readily available. Thatch could still be found but wooden boards or slate were more common on houses especially given the danger of fire from sparks in winter.

One could add gables etc but I'm going for simplified, quick, rugged, underscale buildings with a "floor" to place troops on when the roof is lifted. The second floor is too far down inside most of the houses but my criteria was simply to make sure I could place a company of firing figures into the house and have their muskets stick over the wall to make more room inside.

The following picture was especially useful. 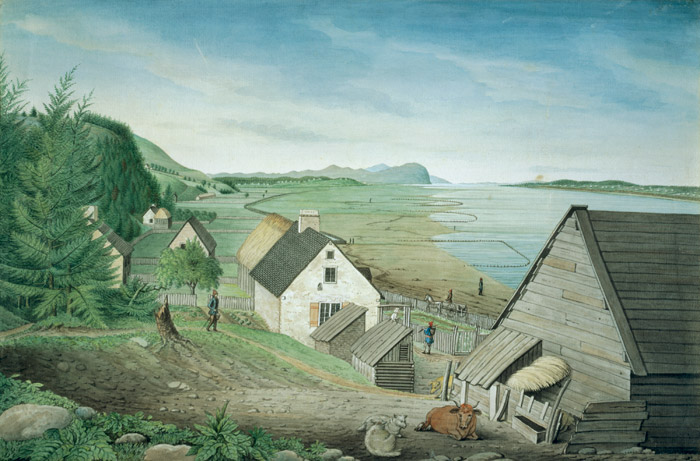 It shows the typical linear arrangement but also some interesting board fencing around the nearer fields where I have planned on making more snake rail fencing. It also shows that the houses themselves would be nearly useless for defence by all but a handful of individuals since there are so few windows to shoot from. I am proposing that a string of my houses will represent an area of houses, barns, sheds and fences where skirmishers could take cover but not line infantry . A large, stone, seigneurial manor or similar might be a more formidable strong point such as the windmill at Ste. Foye.

Inevitably these houses will end up being used in imaginary lands and I hope to do more stone city buildings. The idea I had floated for Atlantica of making town buildings 1/2 square wide hasn't worked well in prototype and I have decided to compromise with the alternate plan of city streets being 1 square wide with buildings on either side. A standard town would then be a nine to fifteen square block needing four to six buildings for a full road junction, three to five for a Tee junction and anywhere from two to six for a town along a road without a major junction.   Grandiose plans might call for several such for a major city fight but most tables will only have one.
Of course these are for wargames so I must keep in mind that all too often at least some of them will end the game going up in smoke.
Posted by Ross Mac rmacfa@gmail.com