I've started digging back into this period in Faraway's History. 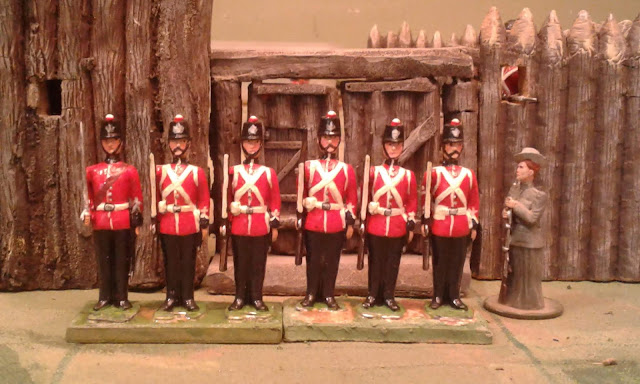 Part of the garrison of Fort Henry falls in for inspection before heading out on patrol.

With the end of the Faraway and Oberhilse Origawn War in 1848, the territory was split as marked by the eastern most red hash lines on the following map. The area to the east belongs to the small Republic of Hougal while that to the south belongs to Oberhilse.

During the twenty years that followed the wars, settlers pushed across into thinly populated area from all sides. Settlers from Faraway tended to push up the west coast into the native lands or up the Grand River towards Port Arthur on Grand Lake from whence an active trade in furs and the like with the natives on the plains and on the farside of the mountains as well as being the easiest way to move goods from Origawn to Faraway's seaports.
By 1865, settlers in the eastern and central portion of the Origawn were beginning to agitate for self rule. In the North West, discontent was increasing caused by increased pressure on the native tribes in the remaining "tribal lands" (as Faraway referred to them) and challenges to the land rights of the mixed race population along the Dhearg River which were traditional by occupation rather than deeded. Fort Henry was established along the frontier to keep an eye on things but it was left to the Governor and a small constulary to keep the Origawn in order.

In June a self proclaimed Origawn Congress was called and after a week of tumulteous meetings, a new Republic was proclaimed, the Origawn Free State. An immediate call was put out for volunteers  and hundreds responded, many of them having seen service under the red and white banner of Oberhilse or during the Blue River Rebellion.

Her Majesty's Government had no choice but to call out the Militia and Volunteers and send the Household troops to the frontier.