A Little is not a lot.

But sometimes its better than nothing.

Its now been a month since my last game and seven weeks since my last "Game of the Month". Painting has been almost as slow but my North-West Voltigeurs have been recruited up to a grand total of 2 (count 'em) 2 figures. A kneeling figure converted from a Zinnbrigade 1900 Prussian, a standing one converted from one of my own 1840's infantry. The "uniform" colours were improvised during painting. The plan was to do all 10 at once and paint them either in an off white with a stripe  like traditional trade blanket coats or else in light blue like the Victoria Voltigeurs but there I was, a free evening, an itch to paint something for the Oregon game and with a puddle of homespun capotte grey on my palette and there they were, 2 figures, primed and ready to go. 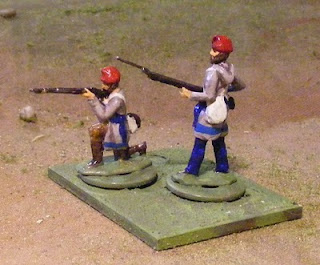 Here they are seen trying out basing options.  They are irregular light infantry and could in a pinch be co-opted into War of 1812 or even French & Indian War skirmish games as Quebec militia. Since HofT can handle a mix of multi and single based figures, it seems to make sense to be flexible and mount them singly so they are trying out washers.

But, stylistically, they don't mesh with my earlier period figures which are chunky and not glossy and now that my rules have finally been tweaked to allow the use of either elements or figures or a mix of both, I find the urge is getting stronger to go back to the way I originally envisaged this campaign, closer to its Morchauser "basic unit" roots with each stand being an "element" with properties as opposed to just being a convenience for moving troops. I also like the idea of differentiating similar projects and since I have single figure horse & musket collection for Charge!, having this horse & musket collection be  an "element" one makes sense. Also, if I were to field my light infantry units as 5 companies with only 2 figures mounted on each base then that would allow me to maintain a standard basic organization and still have light infantry units that are 1/2 the strength of a line infantry unit but of equivalent though different power. ( Two of  those silly fancies that occasionally take one.)

The real question is whether to commit to a consistent organization and basing for this project as was envisaged early on and which is developing an increasingly strong appeal or whether to allow it to slide along as the very practical mish-mash which it is at present. A decision is unlikely before the delayed November game hits the table, hopefully before year end! Suggestions (by my subconscious) that I get the Rough Wooing boys out before year end as they are the only one of the major periods that have not been out this year, are being deliberately ignored until such time as I get that Oregon game on the table.

In the meantime, that grey paint that was on my palette was the result of me finally painting up the last 8 muskets for my homemade 25mm ECW Scots unit. Mind you the King's General for the upcoming campaign has requested that I now raise 8 more pikemen. Is it really a coincidence that I will be fighting on Parliament's side in tomorrow's test game of WECW? 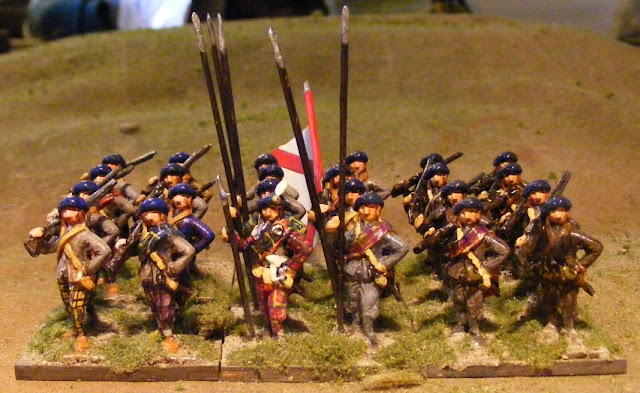