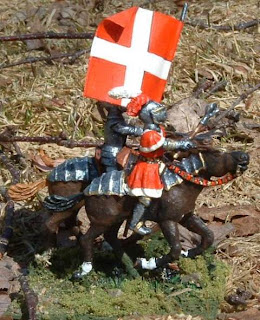 The Sieur de St. Lambert.
The start of this 40mm 16thC collection and the figures that I have been playing with the longest, since Christmas 1959 in fact, back in St. Lambert, across the river from Montreal. Yes, they have been repainted. If any one knows the origin or make of these, I'd love to know. They are 40mm soft plastic and the horses have hollow bodies. In their original state they are armed with lances and have bare armour as in the next picture.

Since the table was laid out and I wanted to give the 16th C lads some exercise as well as take another poke at the rules, I decided to deploy the smaller, English, force holding the gap and have the Franco-Scots  attack. For my Rough Wooing games, I usually deploy 3 stands (companies) for each Grant scenario unit apart from artillery. The English had a small Advance Guard of 3 companies of  Northern Spears (light horse lancers) and 2 Battles each of mixed Bills and Bows plus 2 guns. The Scots fielded 6 companies of pike and 3 of shot as well as 3 companies of Border Horse. The French came to the field with 3 stands of Gensdarmes, 3 other lancers and 3 mounted arquebusiers as well as 9 companies of Landsknecht pike with 3 shot and 2 guns. A quick series of die rolls indicated that the infantry were all coming on the left hand or Western road while all of the cavalry were arriving on the Southern road. (directions for pick up games are always based roughly on the actual orientation of the table to the sun). 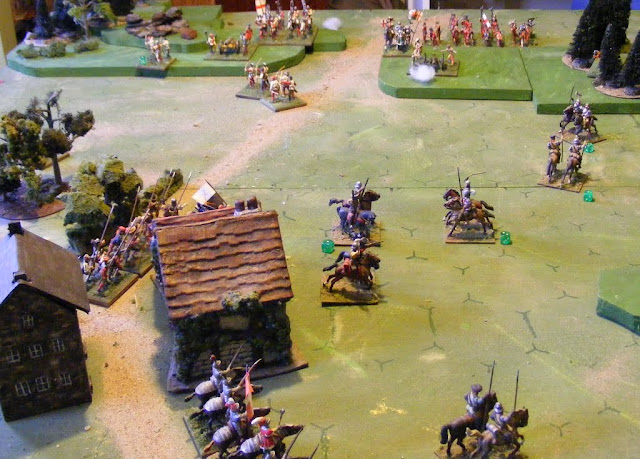 Turn 3. The cavalry are playing not so nicely with each other while the German professionals deploy under the mouths of the English cannon. The little green dice mark hits.

Everything started well enough, I rolled up personalities and aided by a throw of the dice, decided that the Rash Lord D'acre would ride forward with the English light horse to harass the enemy. The equally rash Scots took it upon themselves (control check) to charge uphill into their counterparts but Lord Home was wounded and his lancers driven back. It took a bit of scuffling but eventually the English were driven off.  While that was going, the German Captain sent his arquebusiers through the wood to screen his flank and assessed the situation. As the head of the column emerged from congested streets of Brooklyn, it came under fire from the English artillery on the hills. English archers and cavalry could be seen hovering not too far off. It seemed best to deploy his pikemen. This began on turn 3. By turn 9 I was pretty frustrated and questioning what the problem was but the deployment was finally complete so I carried on and left the analysis until later. It was about this point that I realized that I hadn't set a time limit.The English were plumping for 12 turns, the French were crying foul and asking for 24. I settled on 18 hours as a full day and rolled a die to see how many turns had passed before the attackers arrived on table. The answer was 5 so I ruled that turn 13 would be the last full turn of light and they would be Roaming in the Gloaming by turn 14 and in the pitch black of night by turn 15. That didn't leave a lot of time so the Germans were edged forward towards the eastern ridge, the cavalry brought up on their right and the Scots directed to take the  Western ridge. 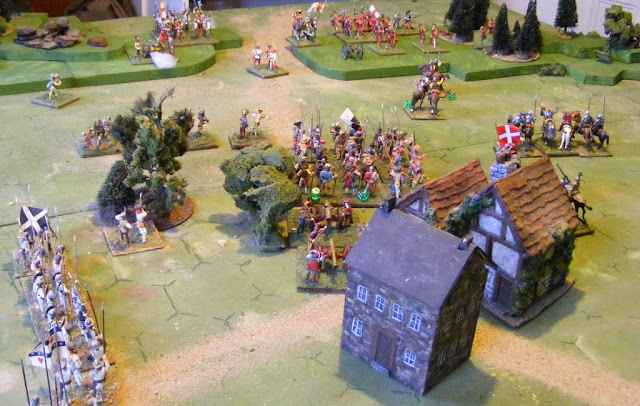 Enow Dawdling! Gae' on wi' it!

The Scots deployed in the wink of an eye and rushed, well, trundled, well, crept,  forward while the Germans marched steadily forward. As the French Horse chased the English skirmishers back into the woods, the Germans crashed into the bills and drove them back. They looked a little ragged afterwards though, in large part because of the hammering they had taken standing turn after turn under gun fire and then facing showers of arrows. With the Scots not quite up yet, the situation was starting to look eerily reminiscent of the ACW game but what were the odds that the English Bills would come down from the hill despite being beyond command radius and cross the gap before either the French cavalry or the Scots could intervene? It would require a bit of luck on the command rolls and 2 prodigious movement rolls. 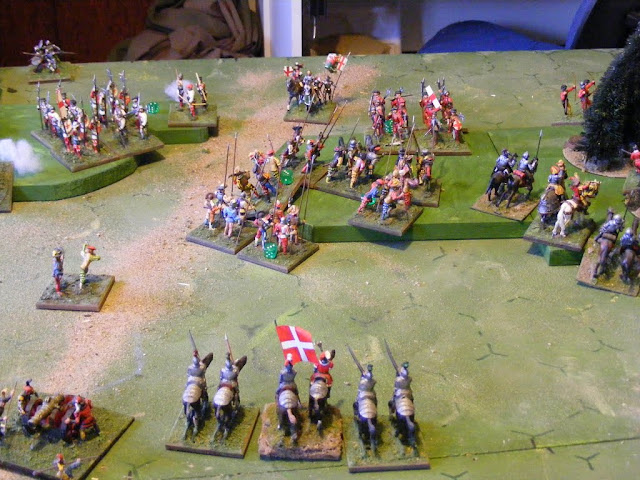 Off screen, a control check for the out of command range Scots has decided that they should stop to watch The Auld Alliance at work. Something that apparently happened with distressing frequency in real life if French reports are to be believed.

Apparently the odds were pretty good because they managed it. Then they managed some impressive combat rolls and pushed the Germans back in a bit of a muddle. In the end it was up to the Gensdarmes to save the Landsknechts and push the English back. The French dice were almost as impressive as the English had been but in the exact opposite way and by the time they rallied back, the gathering dusk made possession of the gap a moot point. Well, it wasn't a  Scots defeat at least, I mean they never got into it apart from the odd  arquebus shot, did they?.

So what was the problem with deploying the Landsknechts? My first instinct was to blame the rules, I vaguely recalled a similar situation a few years ago. Actually, on some further thought, it was the same situation just with Scottish pikes instead of German ones! It had been in an early rendition of the scenario 4 or 5 years ago with the same armies. oops fool me twice......

In game terms, what went wrong? When the head of the German column emerged from the town, the French commander had 3 choices: order the pikes to move forward until they had room to deploy and hope not to be caught before they could deploy, have them fall back beyond the town, deploy in safety and then march around the town or try and deploy as they emerged from the town. The need for speed was stressed in the scenario instructions and the march column was under artillery fire and threatened by advancing archers ahead and an uncertain cavalry confrontation to the right. Without calculating the odds I began to deploy. Here's the tricky bit. Deploying foot is a 1d6" move. Given the size of the bases (60mm), a score of 5 or 6 would allow me to move the pikes forward 1 stand depth forward and simultaneously expand to 3 wide at the head of the column. If I rolled the same again, the deployment would be complete. You've probably spotted the flaw in the plan by now. I didn't roll any 5's or 6's, I did roll a couple of 1's and 2's. The back of the column had to shuffle forward, 1 stands' depth per turn until they were clear of the town and could move sideways into position.

Looked at from a "what's really going on" POV, here are the Germans, order to form their pike block. The column is wedged into the windy streets of this little Scottish town. As the troops move forward, the enemy canon balls are smashing into the ranks as they form. Enemy archers can be seen ahead and enemy cavalry are off to one flank.

What would Montluc have done? Probably kept the arquebusiers where they were supposed to be, screening the column, then advanced far enough to clear the town, detaching a company of corselets (pikemen that is) if necessary, to  hold off the enemy if they pressed and giving the main body time to form.
If I had done that the deployment would probably have only taken 2 turn to complete, 3 if the dice were bad.

So what to do next? I shuffled a few units on, off and across the table and let the Scots try their luck at holding the gap against the English and their German mercenaries. But that's tomorrow's post. 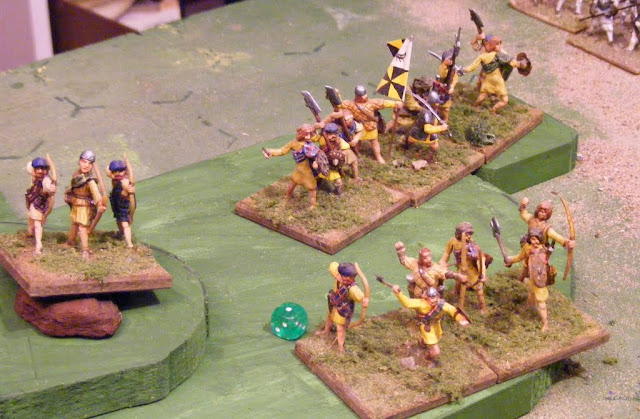