In the light of increased unrest in NkuKhuland the Government announced that it was going to reinforce the existing garrisons which guard the borders. When war looms there is one man that the public clamors for and graciously, Colonel MacDuff came out of retirement to lead the expedition to Fort Belmont. Our correspondent accompanied the column and sent this report. 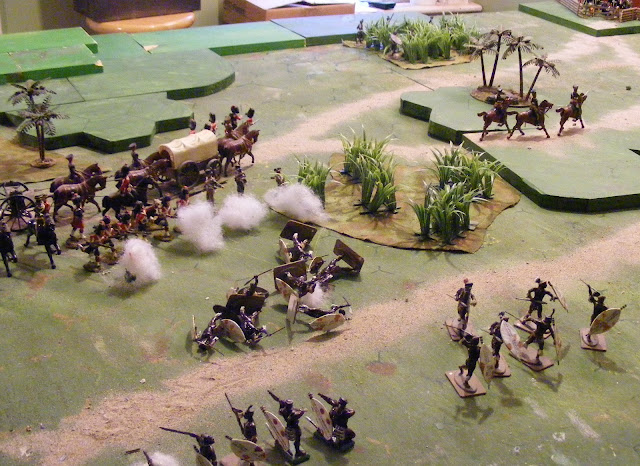 It was on the morning of the 26th of May that the column broke camp and started on the last leg of our journey. No sign had been seen of the enemy but our scouts assured us that one rarely saw any signs of the Nku Khu until their war cry broke the air. The wily veteran MacDuff, with his faithful hound and his piper by his side, was an old hand at this sort of thing and took no chances. A company of the Black Watch marched on either side of the wagons, a troop of Light Dragoons rode at the head and tail of the column and 3 scouts beat the bushes along the road just in front of the wagon. We had just come to Tsentral Ridge, a low but rugged eminence from which one gets the first view of Fort Belmont, when the first shots rang out and we heard that awful cry. Nku! Nku! Nku! Khu! From out of now where hundreds of black warriors came bounding across the Veldt, clashing their spears on their shields while bullets whistled about our ears. (ed. According to official sources, the first attack was made by about 24 spearmen supported by 16 riflemen with obsolete trade firearms). The din was horrific and time short but 'A' company of the Watch and the scouts opened a hot fire bringing the enemy to a halt, then the Lt Dragoons trotted forward, wheeled and charged, driving the enemy back in rout. Looking about I saw the wagons pushing on like nothing had happened. From the top of the ridge, a squadron of lancers could be seen trotting forward to meet us while the cannon boomed a welcome. No new enemy was in sight. In looked like we were home clear. 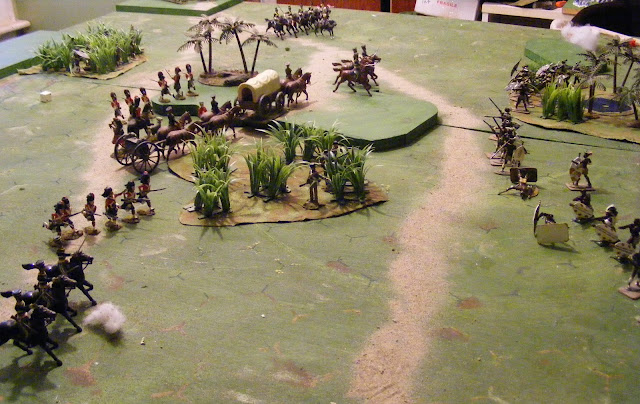 I should have known it was too good to be true, as the wagons edged down off the ridge, more warriors arose from the long grass on either side of the valley and rushed forward while bullets flew about our ears again. As the savages burst from the grass ahead of us, the lancers wheeled to meet them. That's it for you my lads, I thought and quick as a flash the whole lot was heading pell mell for the brush. Splendid! But surely they aren't going in after them? very one knows that the Nku Khu warrior in retreat is like a wounded lion and the brush and gully his lair! The bugle sounded recall, over and over with a desperate edge to the notes but the cavalry had the bit between their teeth and there was no stopping them. Into the brush they went, but only 1 came back out. If there were any more of the heathens in that brush, there was no one between them and the wagons! 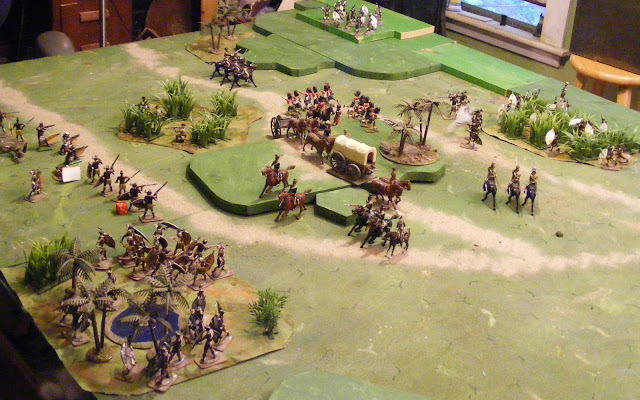 The trap is sprung.

Turning, I could see MacDuff bellowing orders to 'B' company but engaged in a hot firefight, his voice went unheard. On the hill far to the rear, I could see a fresh horde approaching. Something looked familiar about them, using my field glasses, I studied them, could these be the famed zombie warriors raised from the dead? Surely that was a camp fire story only? (ed. No one has ever been able to disprove stories that Nku Khu warriors that are killed early on in a battle often reappear as reinforcing units.) The Light Dragoons spurred forward and easily chased them off the plain and into the hills. Alas, it was yet another trap for the inexperienced troopers.

From the fort, the gun boomed, again, and again as new targets emerged. As I watched in awe, the veterans of 'A' company doubled past me heading for the wagons. Beyond the wagons, the last troop of lancers from the fort tried gamely to cover all angles. As a fresh company burst from the woods, the three lancers spurred to meet them. This time, despite the impetus of their charge, which made them worth double any man on foot by the usual rules of war, failed to impress and they sank like a stone in the wave of black and white. On rushed the triumphant Nku Khu, the QM stepped forward to halt them and demand proper forms but he went down with an Assagai in the belly. Bloody disaster stared the column in the face. 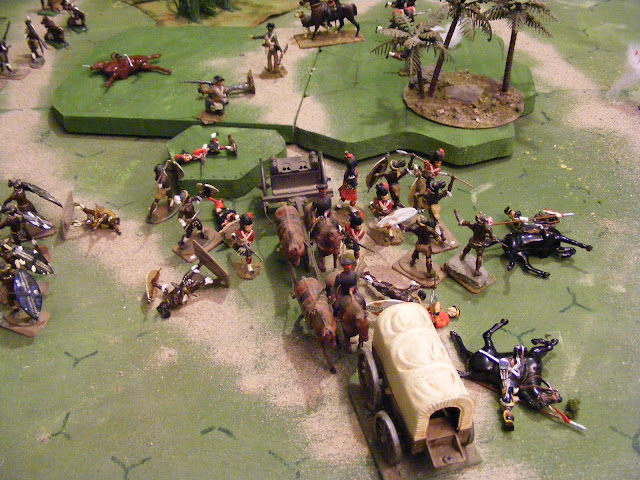 Desperate struggle around the wagons. The dying QM struggles to complete his list of deficiencies.

Onward surged the warriors, drunk on blood, but the stern men of the 42nd matched them. No time for shooting, it was bayonet vs Assagai or knobkerry and the Nku Khu were no match for our Highlanders. As the enemy tried to rally for one last charge, MacDuff led 'B' company forward. The cannon boomed again and a fierce Martini Henry fire crackled up and down the line. Caught in the open the warriors went down like wheat before hail. The remainder slunk into cover, pausing now and then to wave defiance as the remaining wagon trundled into the fort.

The rebel Nku Khu have been dealt a terrible blow but it was not without cost. It may be possible to rescue some of the supplies from the wagon that was over run but only 1/2 the planned stores have made it and heavy losses amongst men and horses in the cavalry will make it impossible to field more than 1 troop from the original 4. The Colonial Council had best authorize speedy and powerful reinforcements if they wish to avoid a long and even more costly war. 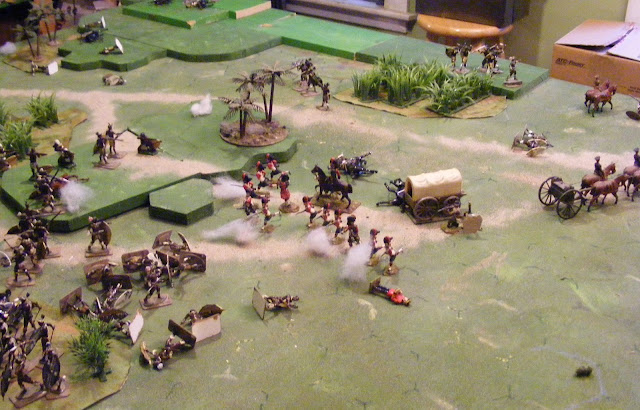 The remains of the column win through.

Note: This wargame was played using old style "standard size" or "small 54mm" figures, the Nku Khu being represented by A Call To Arms Zulus, a perfect match for old Britain's, the British by a mix of original, recast and new Britain's supplemented with some homecast figures from molds sold by Reb Castings. The rules were the current draft of With MacDuff to the Frontier, with a minor tweak to the orders chart and making units rally during their turn again instead of at the end of each turn. The game was played solo and lasted for about 8 turns, taking 2 or 3 hours to play (I forgot to check start or end times!)

The scenario was the Wagon Train from CS Grant's Scenarios for Wargames. For the Imperial player, the units were composed of 6 regular infantry with breechloaders or 3 irregular light infantry or 3 cavalry, or 1 gun and crew. For the Native player, units were of 12 spearmen or 6 riflemen using inferior rifles. Since I didn't have enough units, I recycled casualties to make up the missing units and brought them on late in the game.