Last weekend's game was full of surprises. They started on Saturday when I completed the set up, using the grid to help produce a table closer to the scenario map than usual (just for the heck of it) and started to play. I had decided to play the rules straight up as written so printed off a copy and started the first turn. In no time at all I was lost and confused!

After some memory racking followed by checking relevant blog posts I confirmed that the online version had a bunch of proposed changes which I had rejected on the 1st turn of the game played at the start of November. I had essentially played that game out of my head, without notes and, what with this and that, without updating the draft! So, it was back to the drawing board!

One of the things that I liked about the last couple of games but which didn't work as well as hoped with the small units was the half casualty combat results for things like cover. I decided to revert to the cancelling 1 hit method I had been experimenting with for the Square Brigadier last winter. I also decided to return to set dice per unit rather than dice per figure, again. largely due to wanting small fixed units, and returned to the initiative roll without orders dice. All changes that contributed to this game being the best of a bunch of good games this fall.  It would have been a perfect game for the Newport Noodle if the pictures had been sharper and if I'd had time to write it up right away.

** Please Note: In the pictures, figures lying down have gone to ground and been pinned by enemy fire. Red dots indicate where hits were scored. Hopefully these will be red and blue markers in future to make it easier to trace the action. Thanks to Chris Parker at Huzzah 2013 for that idea.

For those without a copy of Scenarios for All Ages, Blue is a defeated army which must retreat its supply train and 75% of its force over the bridge and then destroy the bridge. In this game they had a General, 2 Colonels, 1 cavalry squadron,  1 Heavy Howitzer battery, 1 MG, 6 infantry companies, an Engineer company and, 8 carts and trucks.  I used the normal engineering rules for the demolition. The scenario says it is a wooden bridge and easy to destroy. I translated that to a pontoon bridge that could be destroyed by 6 points of damage.  I also decided that since losses are morale and fatigue as much as casualties that I would rate 25% losses as units not figures. This meant they needed to get 8 of their 10 units back. That's a very small margin and I doubted that they (I) could do it.

Red had 1 General, 3 Colonels, 3 cavalry squadrons, 3 guns, 1 MG and 8 infantry companies.
They were allowed to bring on 3 units a turn which turned out to be 3 cavalry then 4 waves each with 2 infantry and a gun or MG.  Their mission was just as tricky, prevent the enemy from saving 75% of his troops and all the supplies and capture the bridge intact.  Right.

Blue's rearguard was large enough that the loss of it would force a  draw at least so Red decided to surround it while Blue kicked himself for not having sent the MG back at the start. Since throwing even dismounted cavalry against infantry and an MG dug in around a town didn't sound like a good idea, Red sent the cavalry around and pushed infantry forward into the machine gun fire.  Then he brought up his artillery and sent more infantry to go around the town.


If more of Red's cavalry had had dismounted figures painted up I might have thought to dismount them to block the retreat of the advance guard. As it was there they were on the horses, lances in hand and there was a limbered battery of artillery with only 1 scant company of infantry as an escort. Who would win the initiative?

Red has the initiative! Charge! As they thundered forward, Blue's infantry opened fire while the  gunners grabbed their carbines and struggled to unlimber a gun.  It was 4 dice from the Queen's Lancers for 4,5,6 vs 2 dice from the disordered battery for 5,6 and...... a tie at 1 each!  The horses must have been tired. Blue's infantry also held and both squadrons pulled back to reorganize. Having now been pushed out of one building in Liddleton, Blue began to  withdraw the delaying force while he still could and started to think, maybe, just maybe....

As soon as they were reordered Red's cavalry came thundering back in on the now prepared battery. Probably not a good idea but they came very, very close to trading 1 for 1 rather than being the only one destroyed. Blue's infantry were also hard hit but tied again and fell back through supports which had come up. The Howitzer, with 1 hit left, redoubled its fire. 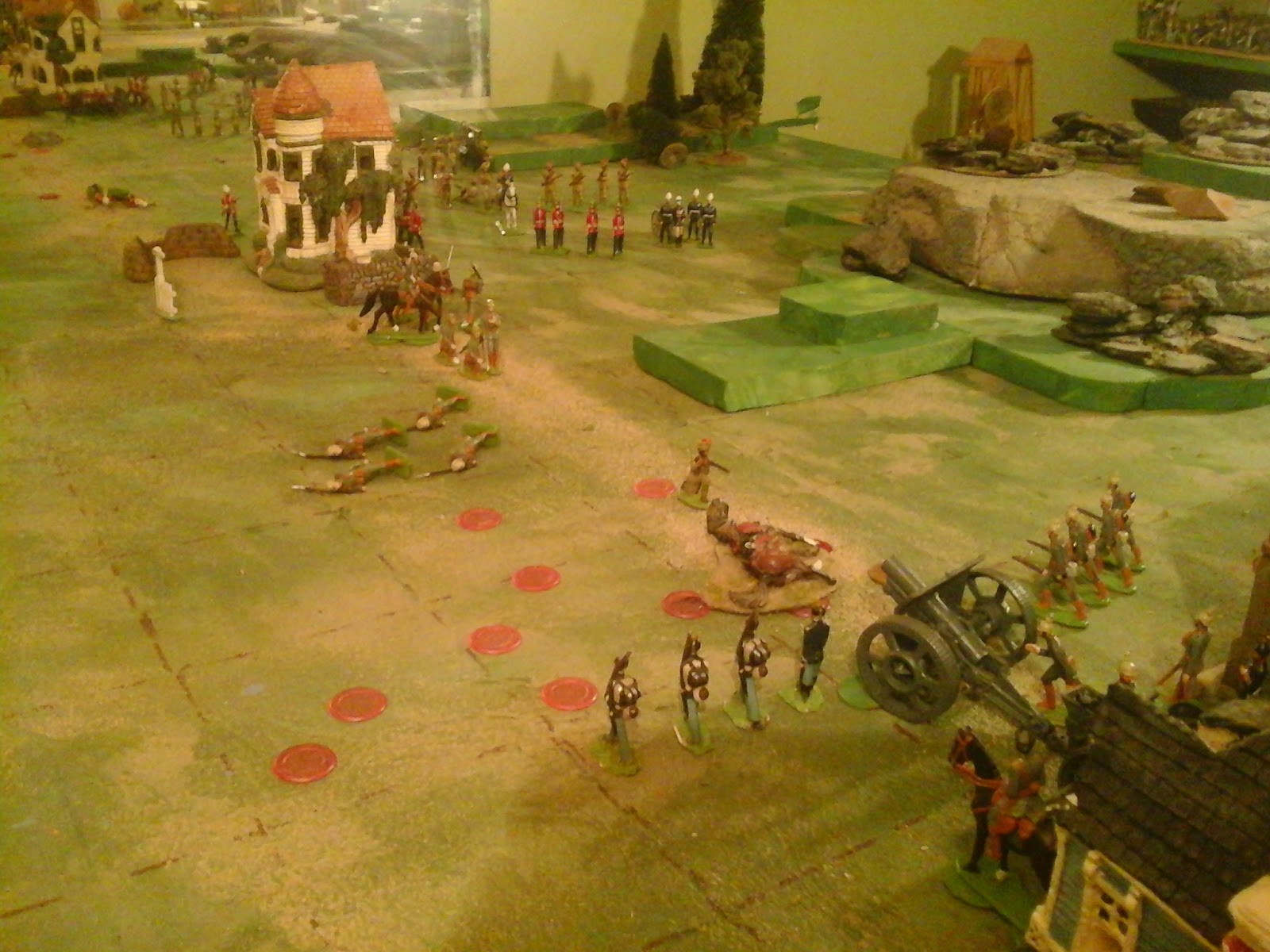 By now Red's artillery was pushing forward and soon shells started to rain down on Blue's force, with minimal effect to Red's dismay. In return the Heavy Howitzer justified the time if not the negligible expense of building it. The horse artillery was pummeled to within 1 hit of destruction but hung in until the enemy was forced to switch fire when a Mountain Battery deployed on a spur of the mountain, one shot was enough to nearly destroy it but by then the road was clear and the deadly Howitzer was once more hitched to its tractor and heading for safety covered by a screen of Blue infantry. Red pushed forward, throwing men forward into more rifle and MG fire heedless of losses and driving the enemy back buto  never able to destroy them or get around and block their retreat or attack the engineers.   There was one last chance for a draw, they were in position to attack the intact bridge if only they won the initiative. But.......


Incredibly, despite the heavy fighting, Blue had only lost 1 infantry unit (part of the rearguard)!  Only 1 infantry and the engineers were at full strength but  actual casualties were light and once the rest has rested, reorganized and patched up the lightly wounded, it will be ready to fight again soon.  Red, on the other hand, had lost 3 cavalry units, nearly lost 2 guns and also had several infantry units reduced to 1 or 2 hits and was in no shape to try and force a crossing.  When I cleared away the terrain yesterday, the only thing left was a shocking number of red discs showing where the fighting had been heaviest. Pity I swept them up before thinking of an over head after-the-battle shot.

A complete victory for Blue!