Veterans Clash in the Valley

Wargame Armies and projects come and the go but sometimes they come back!  So it was with Paul's 25mm Minifig ECW army  which he painted in the 1970's. As it happens, they not only came back to him after the demise of our friend Joseph a few years ago, but they came with extra units from various sources including a contingent of Scots both painted and unpainted. 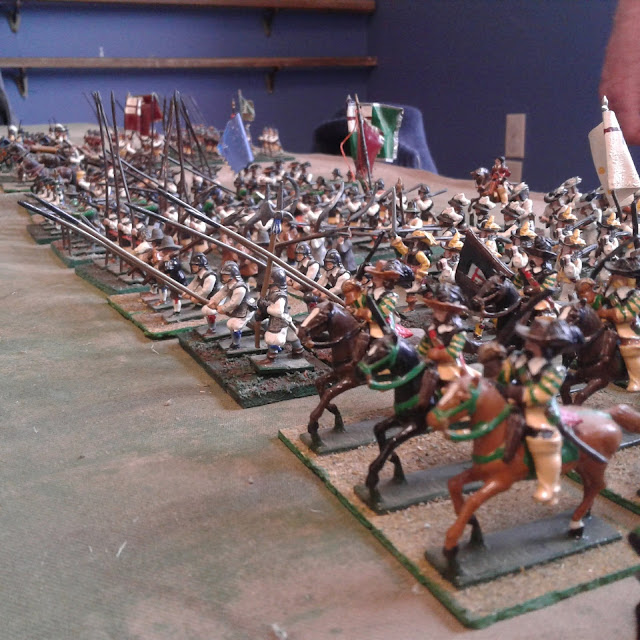 When the quarterly public Table Top Gaming day came up in Kingston in the Annapolis Valley, Paul volunteered to get them table ready if I provided rules and a scenario. Jeff with his much more recent 28mm ECW hordes, which he uses with either Baroque or Victory Without Quarter, was unavailable so I decided to write a one page, quick play set suitable for the occasion.

After much sorting and rebasing to a common standard, Paul was able to field 11 regiments of Pike and Shot, each 18 strong, 1 unit of 12 highlanders, 9 squadrons of cavalry including 1 of cuirassiers, 2 of Scots and 2 of dragoons, each 6 strong, and 6 guns. I still had one unit of Scots pike, 2 of highlanders and a squadron of cavalry. Paul had 2 mounted Generals and I had 2 left over cavalrymen which were quickly promoted. Another commander per army would have been useful.

Given the mix of troops available I decided to go with a scenario inspired by some of Montrose's victories and secretly added 2 more units of medieval Highlanders without mentioning it to Paul.

In order to set the scene properly I found myself obliged to brief Paul and Martin with what they were supposed to believe  which is that their rapid approach march had surprised the enemy and that they would be reinforced  as the game went on so speed was of the essence. Their deployment was an area 1 foot deep and two feet wide centred on the road.

The truth, of course, was that those reinforcements were already on table, lurking in ambush on the flanks.


It took a little longer than I had hoped for us to get sorted out and started but eventually we got there.

Paul commanded the left of the  Covenant force with the bulk of the infantry and artillery while Martin took the left with most of the cavalry.

Brent was given command of the on table portion of the Royalists. While I had the luxury of beginning as a non-playing GM, at least until some of Martin's Dragoons stumbled into a stray unit of Highlanders lurking in some woods.

Since Martin decided to send his cavalry sweeping around the flank, it didn't take long to find the lurking Highlanders. I figured that would give the whole thing away but apparently it didn't. It did slow down that flank though and twice the Highlanders managed to catch a unit in flank as it tried to march past the wood.

As Brent watched the flood of cavalry approaching his sole unit, he decided to launch a preemptive strike. He had a theoretical shock bonus on the initial round but the dice were not kind to him.


One of my units of Highlanders had been inspired to support our cavalry by charging into the flank of another enemy cavalry unit and they fared much better. Luckily, the Dragoons resisted the urge to intervene (failed initiative) while the Highlanders swiftly fell back to cover and resumed sniping.
On the other side of the field I watched the enemy continue to rush everyone forward without throwing out a flank guard. I'm still not sure why I initially flung only one unit of Highlanders into the open flank but it was very nearly a disastrous decision. Luck was with me however and eventually the enemy broke, leaving my two units to spend most of the rest of the game trying to rally sufficiently to resume the attack.
Thus far the Royalist forces had given slightly better than they had taken but the day was yet young and the Covenant forces had pressed on, sublimely indifferent to the any threat to their flanks. Now they were about to assail the main position with more than 2:1 odds, infantry in front and cavalry to the flank.  The battle was a long way from decided.

ALAS! At this point in the game, Brent had to leave and the cameraman got involved in heavy hand to hand fighting all along the line.

In short the assaults on the ridge were held, both against the infantry to the front and the cavalry to the flank. Casualties were heavy on both sides though and the Royalist infantry were very glad to see their cavalry reserve rolling up over the hill on their left flank and into the flank  of the attacking enemy supported by a final swarm of Highlanders.

When the end came, it came swiftly.  The sole unit of Covenant Horse on their right had been prepared for an attack over the hill and put up a fight but were eventually swarmed by Highlanders as well as the cavalry.

The pikemen in the centre however had been hotly engaged in a firefight to the front when the Royalist cavalry not only hit them in flank but rolled up on the dice and went through them like a hot knife. As the Royalist foot  began to advance down off the hill, the whole Covenant centre started to break.

The left wing  Covenant foot attempted to turn and move to reinforce the centre but the Dragoons again refused to come forward and cover their open flank and again my Highlanders could not restrain themselves.

The whole army dissolved in rout.
So ended the first wargame for Paul's revived Minifig ECW armies but it won't be the last.

It took us about a little over an hour to  get organized, chat about this and that, set up the table and sort the troops. The game itself took about three hours to play about 10 of 15 possible turns and was close and hard fought. As a bonus we just may have enticed a suitable recruit to join us in a future game or two.

All in all a Saturday well spent!
Posted by Ross Mac rmacfa@gmail.com