What was I thinking?? 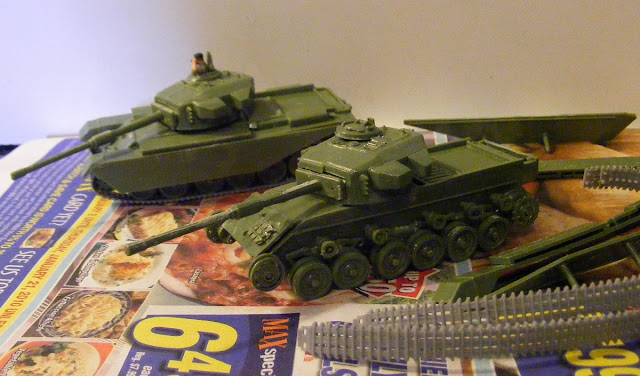 For an extra $20 or so dollars, I could have had two nice, assembled, including tracks, pre-painted, hefty, diecast Centurions but no, I had to save a few bucks and buy a couple of re-released Airfix kits. I was a ham fisted, incompetent model kit builder when I was a kid, what made me think I could do better now that I can barely see my hand in front of my face? Oh well, the wind may blow through the gaps and the rain seep in but based on the the first outing of the Roscian army, 1 Airfix Centurion is still worth 3 Rocco Minitank M60's!
However, 'A' squadron of the the West Hants Horse is not quite ready for battle  and 'C' Company of the Balimont Rifles hasn't mustered yet nor any of the Pherrie-Rhoad Fusiliers so the the Roscian army's appearance in a game of the month will have to wait a while longer.  Instead, the Red Queen's troops will take the field or possibly the NQSYW Prince August semi-flats. Will it be "Boating on the River" (although skating on the river would feel more appropriate) or perhaps the generic version of River Canard?
Posted by Ross Mac rmacfa@gmail.com