Sighhhh, 1/2 way through February and only 4 solo games racked up. I did get inspired sufficiently to produce a unit of "militia" for the upcoming NQSYW Raid on St Michel. My first thought  was to use a mix of loading, priming, firing figures in tricornes and a mix of uniforms & equipment (the loading/priming having open coats). Didn't seem very exciting though so my mind wandered onto the Pandours I was planning to add as light infantry. It occured to me that the original Russian pandours weren't raised as light infantry for the army but as a sort of frontier militia/border guards and that the organization for Light Infantry and Militia is virtually the same. AH-HA!

Naturally I was up at the old farmhouse in Belmont at the time and the only ready reference, my Kannik's Unifrms of the World was back in Halifax. Relying purely on memory and keeping firmly in  mind that this is for a fictional country anyway, I cast up 2 dozen grenadiers, cut down their caps to make up the typical tall felt cap and painted them in black coats with tight red pants. I debated adding red cuffs and lace but there's not much room on the chest of most semi-flat figures and what little there is is fully occupied by crossbelts and I figured coloured cuffs seemed mighty fancy for Rosmark Border Grenz types so I restricted chest lace to officers.  My camera was also back in Halifax so here is a  cellphone snap of the unit waiting for their Colours, 2nd coat of varnish and flocking. 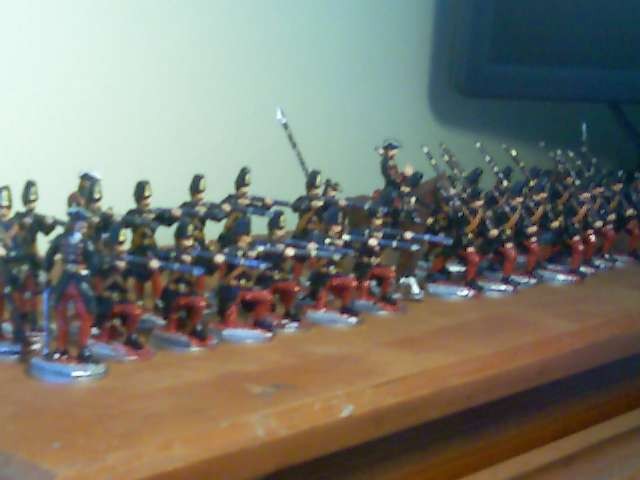 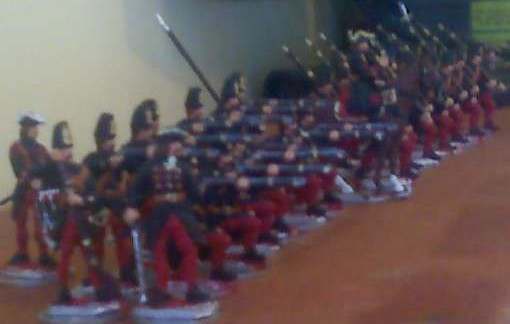