As dawn approached, muffled drums beat the long roll and the defenders of St. Michel fell in and were marched to their appointed places. 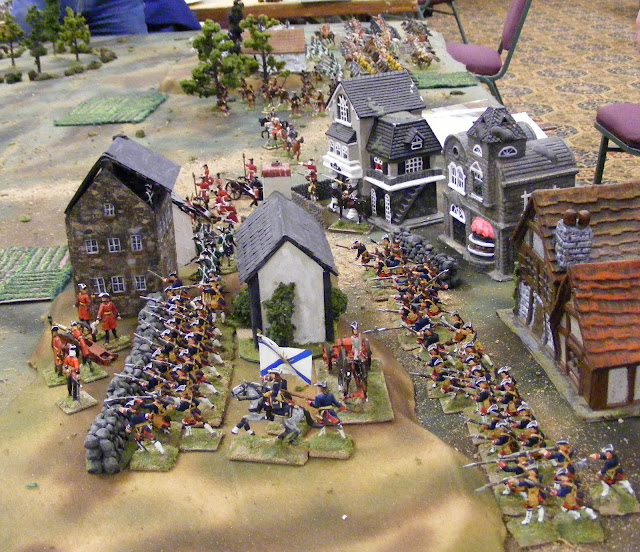 In St. Michel itself, the St Stephen Folk Battalion and a regiment of North Polemburg Militia, occupied the houses. In close support were the remaining companies of MacDuff's Fusiliers, 1 gun of the Rosmark Frontier Artillery and 2 guns of the North Polemburg artillery. Off to the far left, hidden behind and in a small woods and hilltop farm was North Polemburg's Queen Jennifer's Regiment and a company of the Volunteers of St. Lambert. 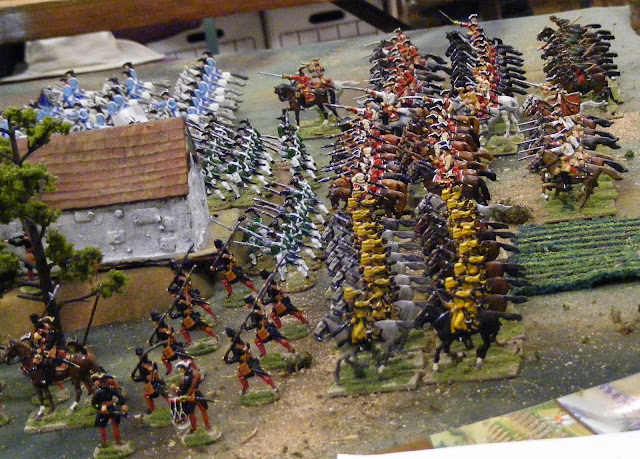 On the right flank, behind a low ridge, were the massed cavalry squadrons of the army. The white horses of the North Polemburg Dragoons, Rosmark's Crown Prince Dragoons, Fitzjames Horse, Yellow Hussars and the Lancers of St. Lambert, 11 squadrons in all. Ensconced in a farm on top of the hill were the Hawks, one of the North Polemburg Regiments who had marched to stand with their allies in their time of danger. (Rumours that the North Polemburg were already massed on the Rosish/Schoeffen-Buschhagen border for another purpose, have never been substantiated.) Covering the inner flank of the Hawks were the remnants of the Pandours.

As the morning mist cleared, the massed forces of the Pragmatic Army could be seen, filling the narrow defile between South Wood and Forest Hill. It seemed impossible at first that so many troops could be squeezed in to such a small area, but based on reports about the column which had forced its way through the Walmar River Pass, the defenders expected to see even more troops. (Rumour has it that one of the allied regiments disappeared over night leaving the attack one regiment short in addition to the heavy losses suffered when forcing the pass but this has been officially denied. The official version is that the Kamdenjard and Burgdorf-Reuthenheim contingents were back in barracks and had never been included in the campaign. All we can say for sure is that they were not engaged in any of the battles) 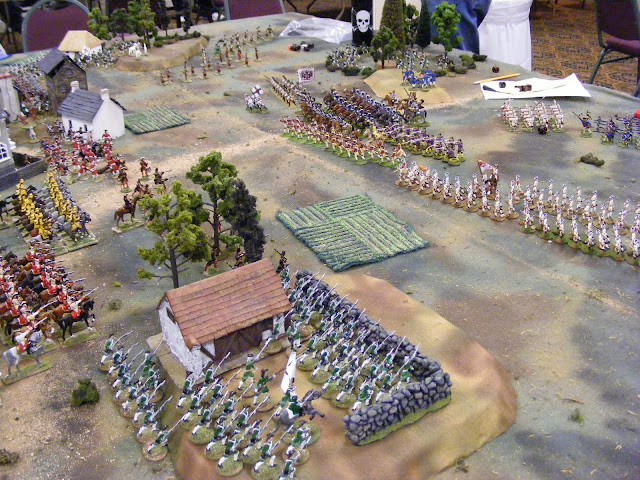 Due to inaccurate maps, the Pragmatic artillery had been positioned on top of various hills with the expectation of being able to fire over head in support of the attack. Once the morning mist cleared, it became clear that the hills were not high enough and the attack had to go in unsupported while the guns were advanced. On their left, the Wachovian and Stanzback-Anwatch light infantry filtered forward through South Wood, supported by a composite allied cavalry regiment. The opposing squadrons eyed each other through the day but an attack by either looked likely to incur casualties for little gain. It was left to the VieganBurgher and Von Hoggendorf Composite Regiment to lead the attack into the mouth of the defender's guns.
As the attacking infantry reeled from the heavy doses of cannister, a new threat emerged as the Volunteers of St. Lambert advanced from cover on their flank and opened fire. Queen Jennifer's Regiment followed behind them and a long drawn out musketry duel with the Konig Rupert Jaegers ensued and any advance on that flank stalled. 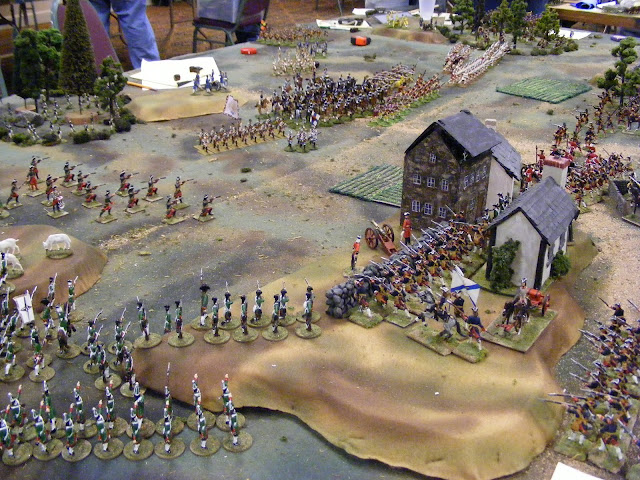 In the center, the Fredonians then advanced along with the Saxe Kirchdorf contingent which they were brigaded with. The Yellow Hussars and Pandours had been extended to the left to try to cover the gap in the middle of the defensive line. Seeing the enemy infantry advance, the Hussars drew sabers and charged.  The infantry, caught by surprise, fired a ragged long range volley then the Hussars were amongst them, hacking and slashing.Within minutes, the remnants of the infantry was streaming to the rear while the Hussars rallied back clutching a trophy to hang in the village church. Beyond the Fredonians, the SB Prince's Dragoons had edged forward then, fearful of the cannister fire, edged back and finally waited, fretting until the path was clear. By then it was too late and the Rosish Hussars had rallied behind their light infantry, redy to attack again. 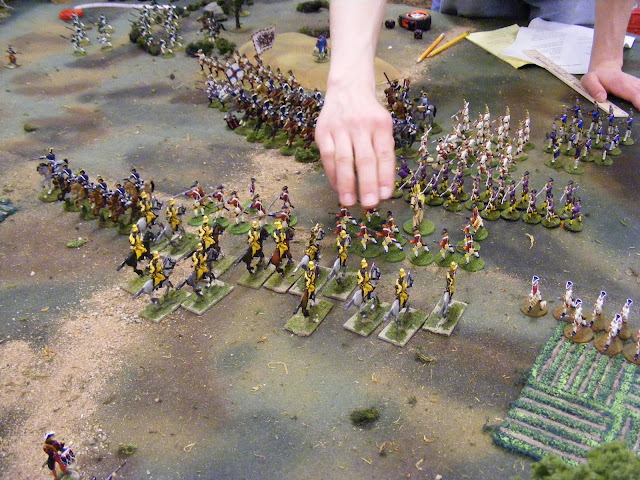 A brief pause fell over the battlefield as the Pragmatic army reordered its ranks and prepared a new assault under the cover of an intensified barrage. On the right, the reconstituted Wachovians came forward. (Word is that the Bollmer-Hunz contingent was issued Wachovian uniforms and pressed into to service to make good the previous day's losses.)  On the left, the Stanzbach-Anwatch Regiment and light infantry advanced and opened a long range fire which was answered by the Pandours and the Hawks. 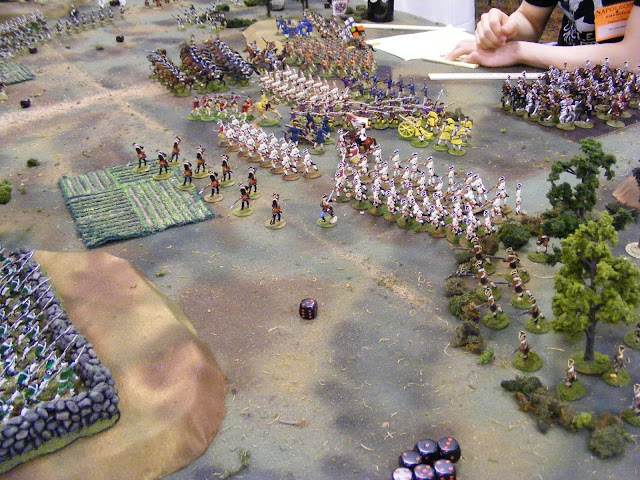 In the center, the Combined Grenadiers advanced resolutely but suddenly there was a pause and then the whole army began to slowly fallback. The High Comand had looked at its losses before a serious assault had even begun and considered the long road home. The game no longer looked worth the candle and suddenly getting the army home became the priority. 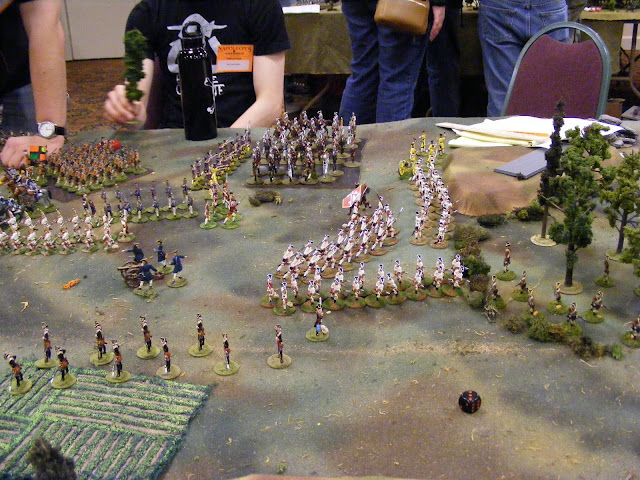 Would one more regiment have helped? or would it have merely added to the butcher's bill on both sides? Historians will argue the point for years as they will debate why cavalry was posted in front of the town, why the guns were scattered along the line, why the infantry attacks were pieceme and why so much infantry was deployed in front of the irrelevent farm position. As always such moves can never be proved rght or wrong in themselves but perhaps future amateur historians will refight the battle and see if thay can do better. 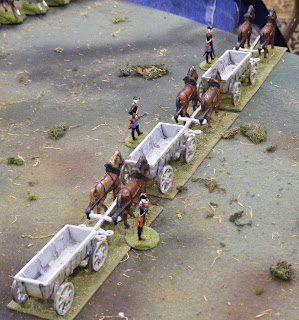