All morning long, the wounded had been filing down the road and over the bridge. The Schoeffen-Buschhagen regiments defending the bridgehead checked their flints and looked to their priming again and again.  Why were the Hussars hanging about the river bank instead of being out scouting? At long last a dust cloud arose to the south and from it emerged a tight body of red coated cavalry, Fitzjames Horse. The inevitable Rosish counter attack had begun.

Riding rapidly forward, Fitzjames had caught the Hussars by surprise, these had two choices, flee in ignomy or wheel around and charge. There was little doubt, the trumpets called out and the troopers wheeled forward. With luck, they could clash briefly with the heavy horse and then be away, the trumpets sounded from the red ranks and both sides spurred forward and the opposing cavalry met with a clash. The Hussars tried to pull away but the red coated troopers' blood was up and they were in no mood to let the enemy escape. 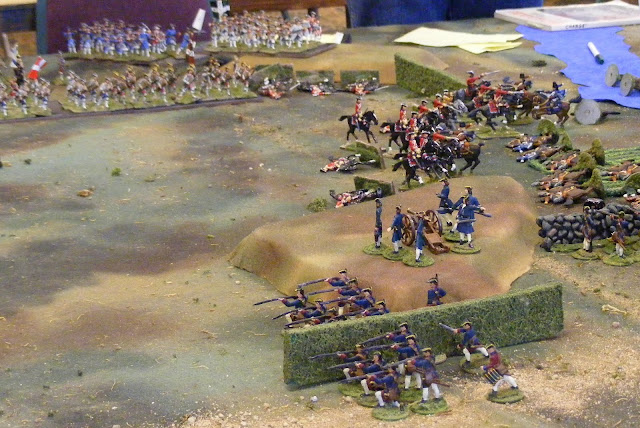 In minutes it was over and the few remaining hussars were scattered in flight or being marched to the rear by their captors. The next job was one for infantry and guns so the red coated Horse rallied back . 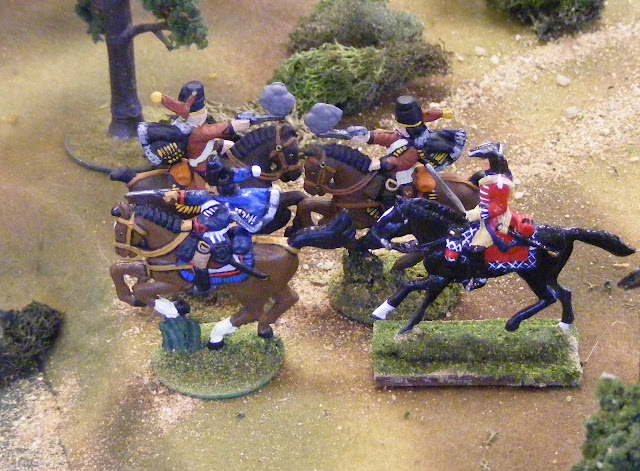 As the Rosish infantry columns marched on table and began deploying, the defenders shifted their positions to meet the threat. A gun and von Nordenhafen Regiment deployed to defend the town and a stone wall just east of it while the Adelmann Regiment occupied the approaches to the bridge. 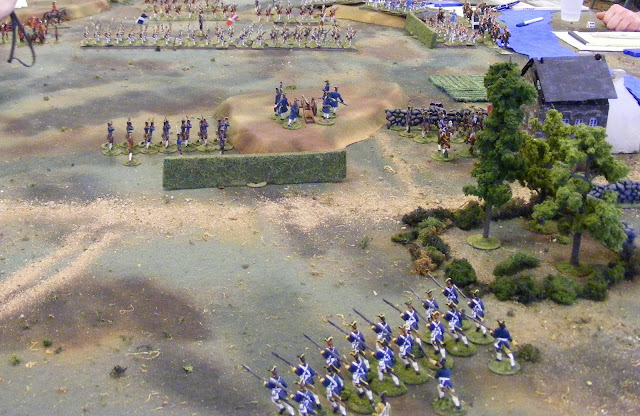 The Rosish infantry brigade deployed with the Queen's Foreigners pushing up the river bank to take the bridge, the King's Regiment deploying opposite the stone wall supported by 2 guns, and MacDuff's forming a 2nd line in the center.

Under a steady fire of shot and then cannister and musketry, the King's men, the 2nd oldest regiment in the Rosish army, advanced on their foe. On their right, the Rosish artillery commander seemed unable to find a suitable gun site as the battery shifted from position to position with hardly a shot fired, but at last they opened with effect, temporarily silencing the defending gun. Disdaining to retreat, the SB artillerymen called on infantry to help man the gun as a company of the King's regiment charged forward with bayonets lowered. They had time for one blast of hastily loaded cannister before the white coats were on them, stabbing and shooting the hapless gunners. The carnage had been great, however, and the Kings Regiment, having lost 1/2 of their numbers fell back in accordance with the accepted customs of war, but they fell back dragging their captured trophy and no Schoeffen Buschhagen troops made a move to interfere. 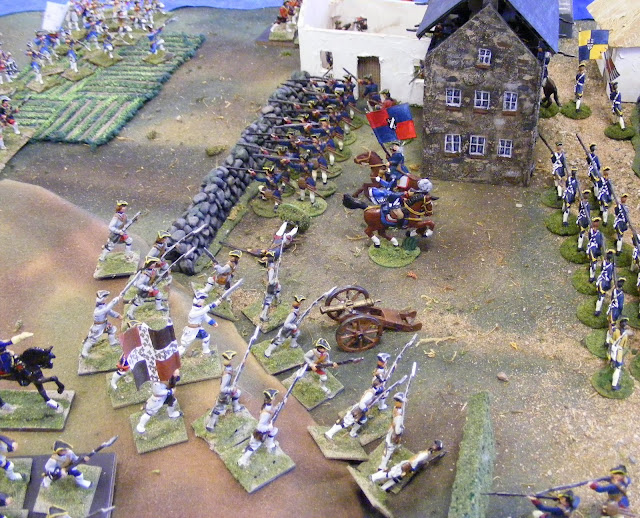 Near the river bank, the Queen's men rushed forward but getting over excited, broke ranks and small parties dashed ahead to assault the houses. A gallant but forlorn attack and the survivors carried their supports with them as they fellback. (ed note: In Charge! only those troops within 1/2 move of a house can break into a house when attacking it and several times during the last 2 games, the Rosish player found himself having to leave 1/2 his assault party beyond the walls, unable to fight but forced to also fallback with the lead elements and rally after the inevitable repulse)   Time and  again they rallied and pressed forward, at last coming on in order and unleashing disciplined volleys at the enemy who gave them back fire for fire. Amidst the smoke and carnage all was confusion but at last the Queen's troops acknowledged that they had met honour's demands and in accordance with the rules of war, fell back to reform leaving the battered remnants of Adelmann's clinging to their position in a cottage covering the approach to the bridge, the same one so stoutly defended by St Stephen's burgers during the initial battle of the campaign. 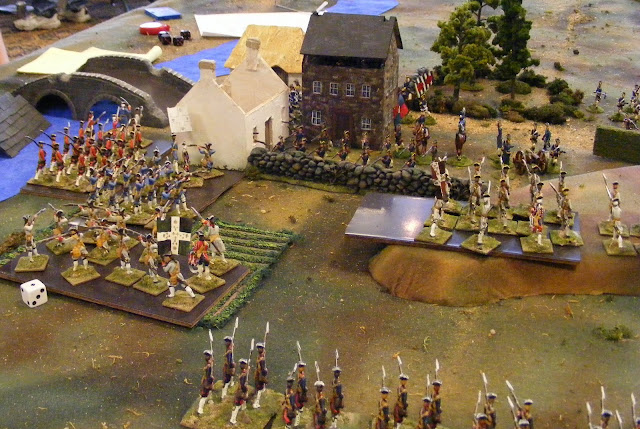 Dusk was rapidly approaching as the veterans ofMacDuff's Fusiliers, the oldest and most decorated unit in the Roshish army, stepped forward over the bodies of their comrades and marching forward until the officers could touch the stone wall with their swords, unleashed a terrible volley, lowered their bayonets and charged with a wild yell. 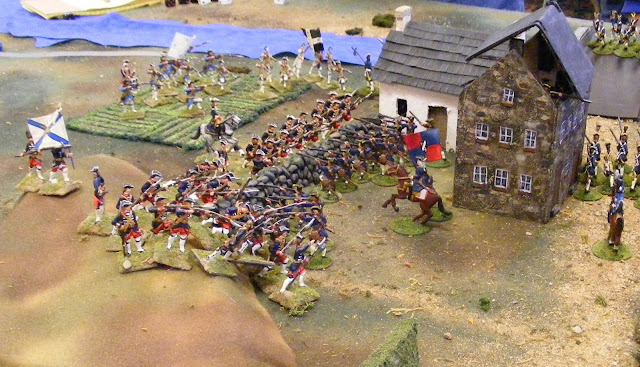 The men of von Nordenhafen stood bravely at their posts, and died, the ensign giving his life as Captain Macpherst of the Colonel's company snatched the colour from his dying hands. Chasing the remnants of the enemy regiment from the village, MacDuff's men captured the town but darkness had fallen and the Brigadier called them back. The main enemy forces were expected in the morning and holding the ground that had been won while the King and Queen's regiments reorganized was more important than risking a night assault on an enemy position whose strength could not be assessed. 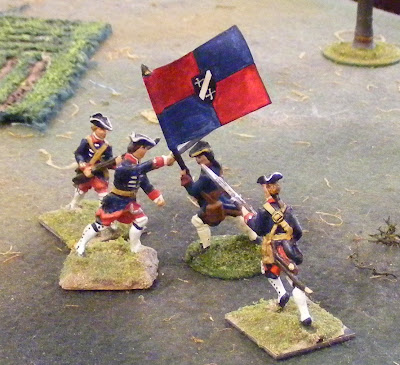 (A recreation of the capture of the colour by Captain Macpherst. Interestingly, other pictures show the colour being captured by a sergeant of MacDuff's but the Captain has been awarded the Order of St. Michel and is acknowledged as captor though there is no doubt that he was ably seconded by the sergeant and fusiliers of his company.)

Reminder: don't forget to check the Sharp End of the Brish blog by my co-conspirator Rob Dean, for more on setting up and running the games as well as the view from the other side.
Posted by Ross Mac rmacfa@gmail.com