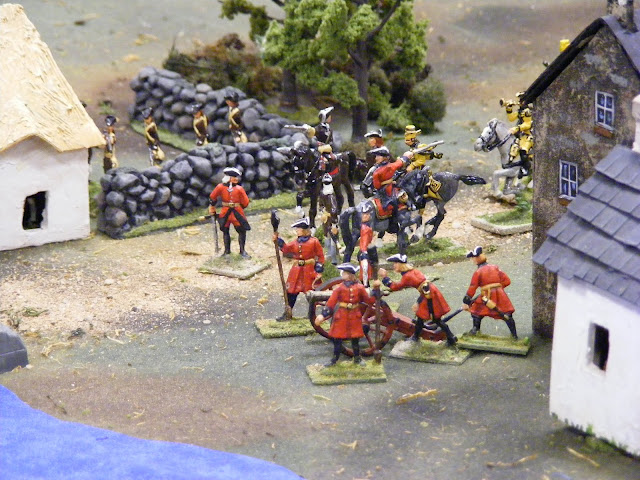 The sudden appearance of  enemy Hussars on the far bank of the river causes a stir amongst the Rosmark officers.

On the morning of March 11th, the garrison of the border town of St. Stephen consisted of the St. Stephen Folk Battalion (2 companies of militia), B section of the Rosmark Border Artillery and 2 squadrons of the Yellow Hussars. (The 2nd squadron was on patrol duty). By chance, Colonel McNamara and the Queen's Foreign Regiment was bivouaced just east of town. As the troops were drawn up for morning inspection, a sentry sounded the alarm. Two squadrons of hussars could be seen riding up from the south west. Friend or foe? A raiding party or a patrol? Colonel McNamara quickly assumed command as senior officer.  Within minutes the Hussars were close enough to be identified as a composite  regiment formed of squadrons from Schoeffen-Buschhagen and Wachovia. A swarm of jagers and a long column of infantry followed in short order and there was no doubt, The Pragmatic Alliance was up to something. 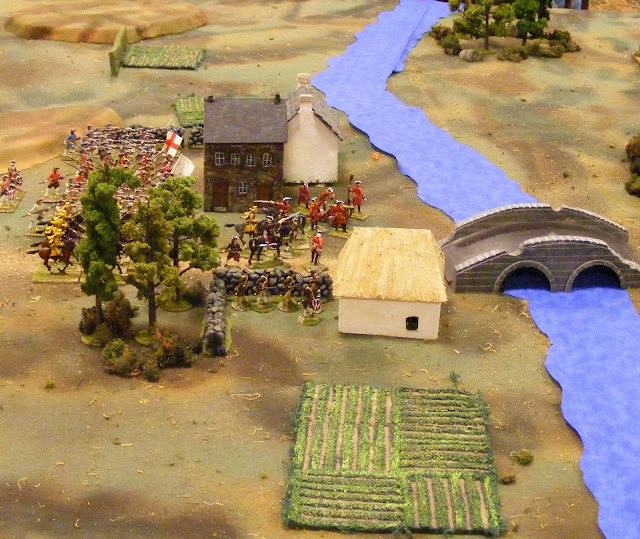 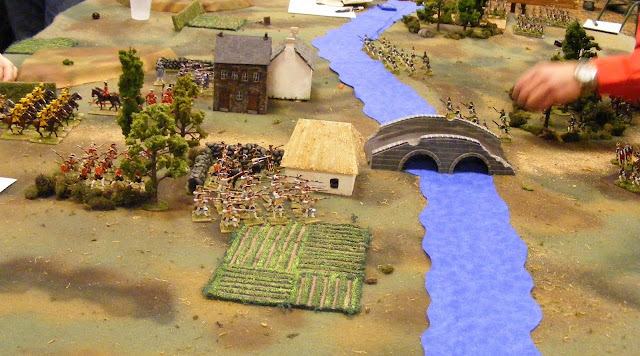 For a few minutes it looked like the Hussars might gallop across the bridge and make a dash for the gun  but discretion overcame valour and they fell back to a hill overlooking the bridge. The Konig Rupert Jagers and a battery of artillery deployed across from the southern end of the town and began a long range pestering fire. Under cover of their fire, the SB Adelmann Regiment deployed into line at the foot of the bridge then sent 1 company storming across into a hail of cannister. 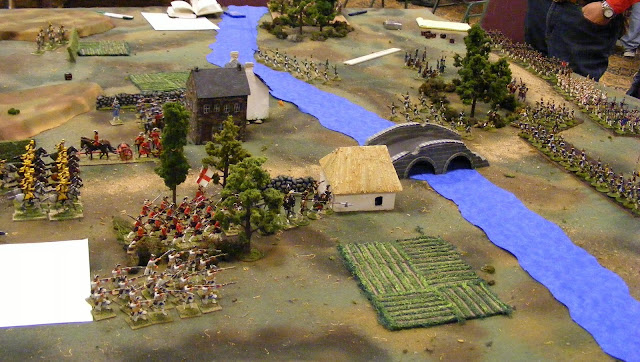 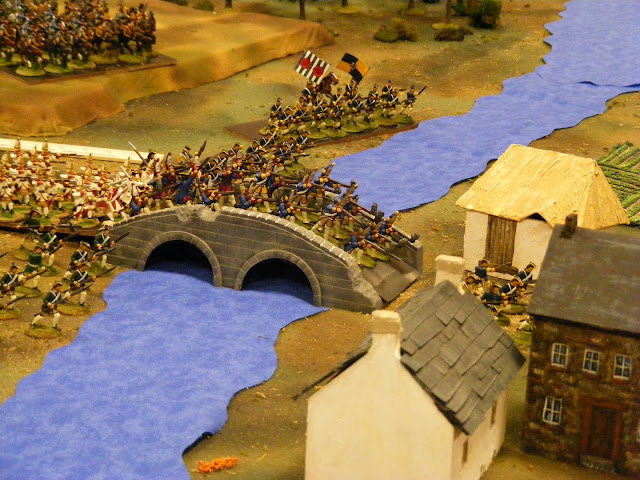 Reeling from the fire, the attacking infantry took shelter near the bank while the combined grenadiers of Schoeffen-Buschhagen rushed over the bridge and assaulted the closest building, supported by the grenadiers of Stanzbach-Anwatsch. 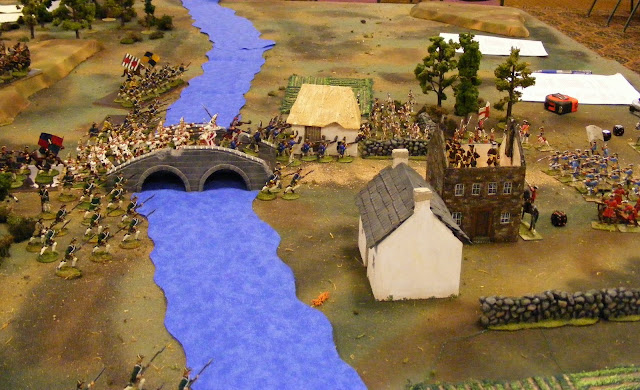 The brave burghers of St. Stephen were undaunted at this assault by the Pragmatic Alliance's finest. Assault after assault was thrown back but as the attackers began to spread  out, an order to reinforce the Stone House  was misintrepted, the entire garrison of the unengaged quarter of town moving to meet the foe leaving a fatal gap in the defences. The growing numbers of attackers signified that it was time to go before the defenders began to suffer heavy losses. As the infantry formed column and marched off, the SB artillery finally found the range and laid out 1/3 of the Irish company of the Foreign Regiment. The defenders marched off, all units intact including their gun, proud of a valiant defence but just 1 casualty too many to claim that they had inflicted twice as many as they had suffered. 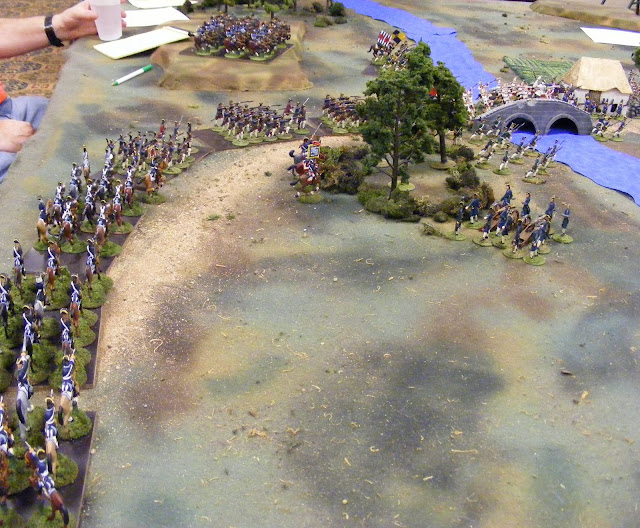 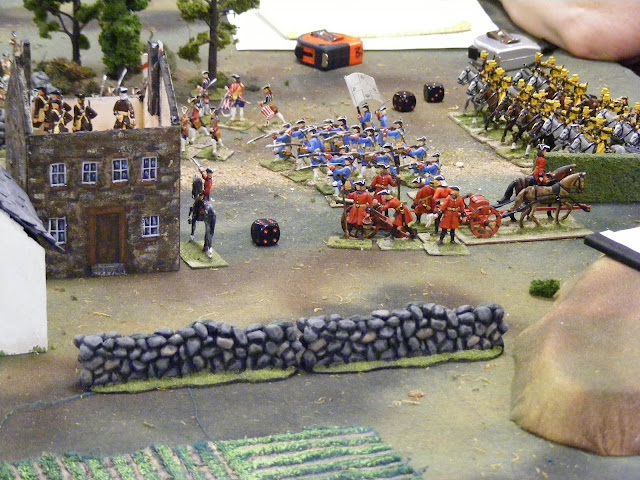 One last shot before the artillery limbers and moves off.
. 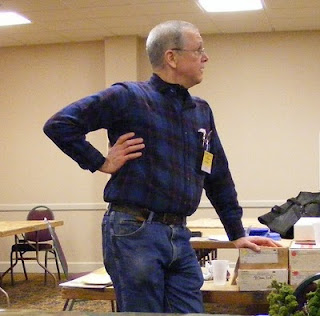 and a candid picture of the Impartial co-GM and proud creator of the armies of Scoeffen-Buschhagen,
Rob Dean, in a typical pose.
(oh yeah, I may not be a great photographer but I do enjoy being the guy with the camera)
Posted by Ross Mac rmacfa@gmail.com