Both sides spent a difficult night in St. Stephen. Under cover of a truce, parties moved through the streets assisting the wounded and clearing away the dead. One can only picture the horrors of chipped paint and broken muskets not to mention the possibilities of snapped ankles which they must have encountered. The game of war is not for the faint at heart. 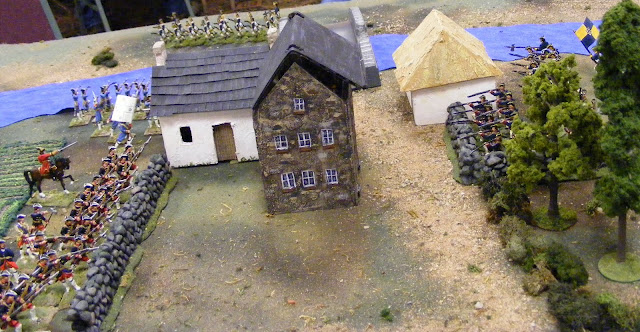 By dawn, the armies faced each other across the narrow streets of St. Stephen. The Schoeffen-Buschhagen forces had been reduced to one amalgamated regiment split between the embattled cottage at the foot of the bridge and the far bank and a weak squadron of Hussars gathered from the remnants of the original 4 squadrons. 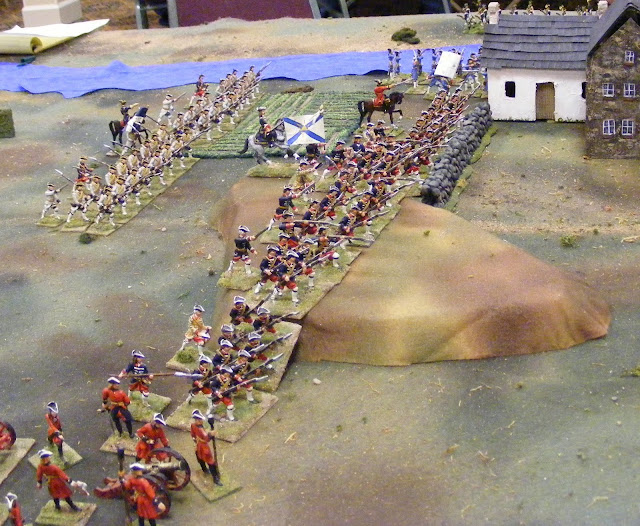 The Rosmark forces were deployed with the 2 companies of Queen's regiment in town supported by MacDuff's on their right and the King's Regiment in reserve. The cavalry and artillery were posted on the far right in anticipation of the arrival of the main Pragmatic force returning from their raid on St. Michel. They did not have long to wait. 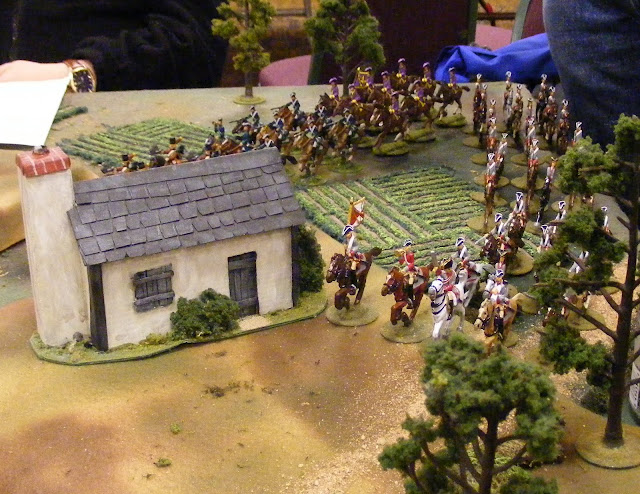 Fitzjames' Horse spurred forward at the first sight of the enemy cavalry and a swirling melee soon filled the narrow gap between the Norwood and the fields surrounding the town. A force of pursuing cavalry from St. Michel was soon at hand and both sides fed squadron after squadron into the churning battle. 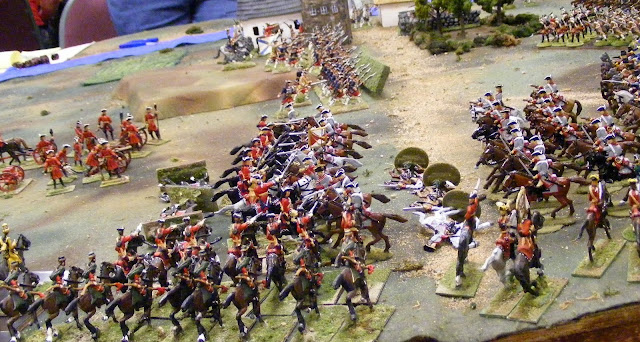 While the Pragmatic cavalry held the Northern Allied cavalry at bay, their infantry columns marched on heading for the bridge. 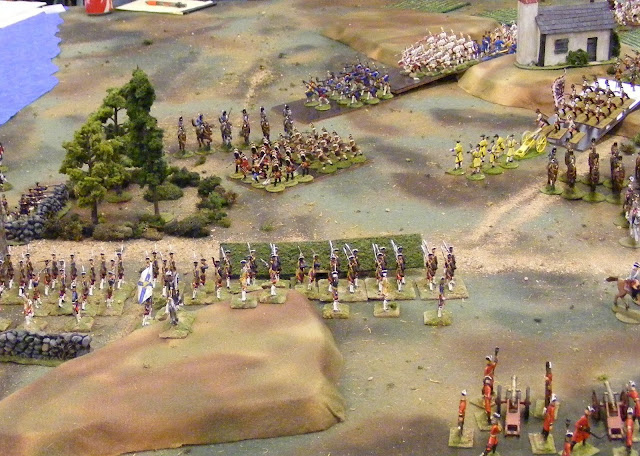 The Rosmark artillery opened fire, cutting swathes through the enemy columns, one shell struck a Fredonian artillery caisson and the 1/2 battery disappeared in a spectacular explosion. 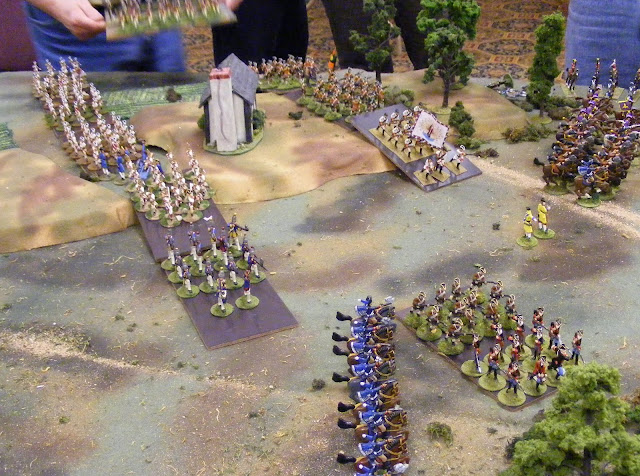 In town, the Queen's Regiment was ordered out of their cover and sent forward to try to cut the Pragmatic army's retreat. Enfiladed from across the river and unable to break into the stout cottage, they were cut down and forced to retreat. The King's regiment took their place and suffered the same fate. As more Pragmatic infantry streamed onto the field, the Stanz-Anwatch and Wachovian light infantry deployed amongst the woods and hedges surrounding St Stephen and began a telling fire on the Rosish infantry. 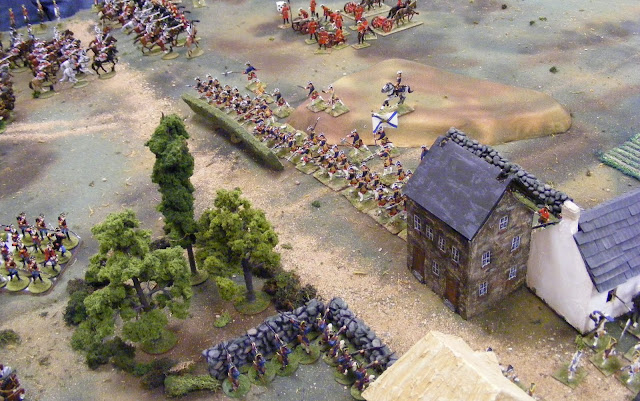 As the King's Regiment was forced to retreat, MacDuff's extended themselves in an attempt to cling to a foothold in town. It was to no avail, increasing Pragmatic pressure, including a fierce charge by the Grenadiers, drove MacDuff's back to the outskirts of town. 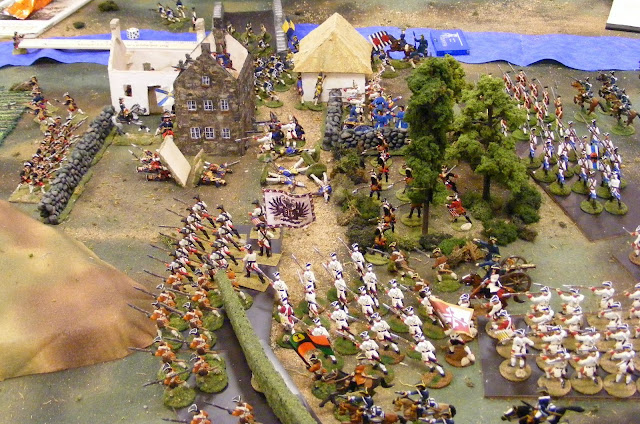 The retreat of MacDuff's left the Rosmark battery exposed. In a flash, a squadron of Wachovian Hussars charged only to be met by their old nemesis, the Yellow Hussars. Another prolonged melee saw the final destruction of the Wachovian Hussars but they had done their job. Under cover of the cavalry melee, the Wachovian infantry had deployed and advanced on the guns. As the victorious Yellow Hussars rallied back, the guns had to retreat with them to avoid being over run. 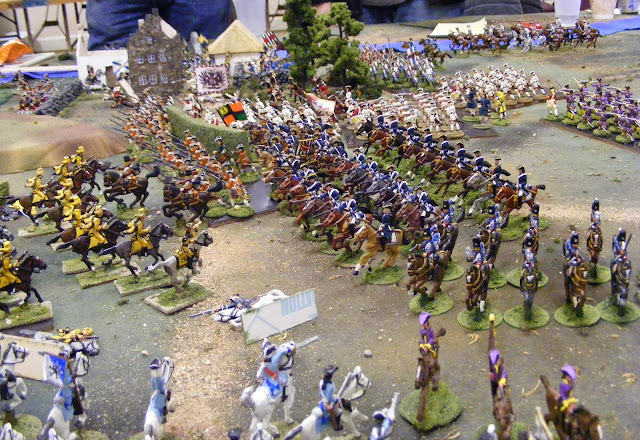 At last, there was a break in the main cavalry melee as the remnants of 2 Pragmatic regiments broke to the rear and the exhausted Rosmark troops  rallied back. Both sides brought up fresh cavalry reserves but the bulk of the Pragmatic army had already passed by and their path over bridge was open. The Pragmatic Army's escape had been bought by the lives of their cavalry and the bravery of the veteran Schoeffen-Bushhagen infantry. The Northern Alliance warchest had been saved and the enemy chastised though not destroyed. Honour had been served and further blood shed would serve no further purpose. The Northern Alliance cavalry was called back to wathc as the weary Pragmatic Army marched over the bridge towards home. The Raid was over, further retribution could await another day.