Keeping in mind Don Featherstone's views on battle reports, as mentioned in CS Grant's The Wargame Companion, I shall avoid any pretense on reporting an actual battle and instead will comment on how the rules affected the games. It was my intention to record die rolls, movement etc., but ...........if life were WRG 3rd ed, I would be "D class", what later rules called "Irregular C" or "Warband". In other words I lack the required discipline and devotion to book-keeping that a good QM should and once the action began, I only remembered periodically to make a few cryptic hieroglyphs to guide future historians.  I'm afraid memory cross referenced with interpretations of periodic photographs will have to make good  the lapses. 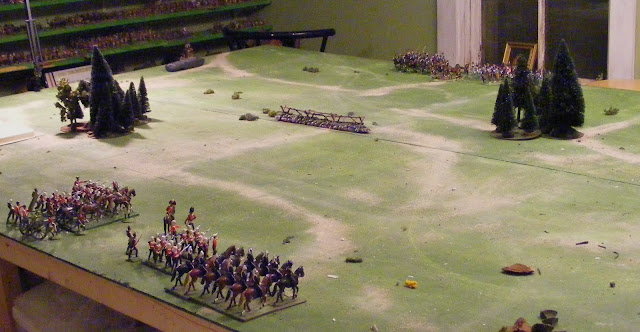 The sharp eyed amongst us may have noticed that the British Army appears to have dressed in anticipation of invading Scinde or Gwalior or some other such plump if troublesome target while the US forces appear more prepared for hot Mexico than cold Canada but rather than launch into a prolonged explanation of how they actually got here from there, I will merely remark that Canadian summers can be quite hot and humid and such tropical dress is quite appropriate. Or, imagine if you will in 1844, the Oregon Crisis is in full swing and the decision has been made to send a force from India across the Pacific to reinforce Fort Vancouver on the Columbia River (not to be confused with either Vancouver BC, site of the recent Olympics, or Vancouver Island where you will find Saxe-Bearstein),  the 31st Foot, the Young Buffs, (taking a break between Afghanistan and the Sikh War), the 49th Foot (who having recently served in China were close at hand), a battery of the Bengal Horse Artillery, (because of their striking uniform and as John noted, one just doesn't see them enough) and last but not least the Governor General's Bodyguard. (ummh who marched across the Prairies, blazing the trail for the NWMP to follow perhaps?)    Meanwhile, up the Oregon Trail comes marching General Scott with the 2nd Dragoons, 2nd and 3rd Infantry and a battery of artillery in a new experimental helmet.

Turning now to more practical matters, I decided that each game would start out as per the book and follow the original orders as far as possible. Obviously, as the games progressed, this became increasingly difficult but I tried to be guided by their spirit of direct aggression when all else failed. Here is the original layout. 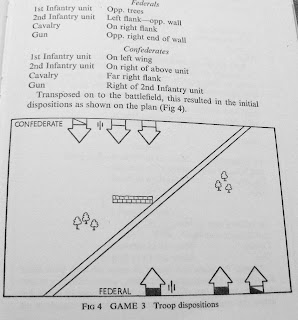 Since the set up was the same each game, I won't repeat the set up picture for each. It may be noted that the US forces are filling in for the Confederates and the British for the Union, this was a random choice but may indicate an ingrained instinct to view the boys in blue as rebels while those in red represent government and the rule of law. That's the US 2nd infantry holding the left flank with the 3rd infantry in the middle. (precedence having been decided years ago by the order of painting).

The first game was played using Charge!. This is a venerable set of rules that gets better and more clever, the more I use them. I have met few rules that manage to do such a good job of subtly encouraging proper tactics. This is not obvious at first glance as it cheerfully lets you do all sorts of silly things, it just punishes you for doing so until you learn better, and it does so while you are having fun playing a simple game. Like my parents, Lawford & Young became wiser as I grew older!  Unfortunately, the game has 1 great lack as a set of solo rules, they are designed for simultaneous moves in accordance with written orders. This creates a great deal of uncertainty in face to face games but even my poor memory can recall what I wrote for the Red army when I start writing for Blue. I have been casually pondering various work-arounds, using the alternate system from the basic rules, writing orders for 1 side then using dice or cards to select orders for the other side based on a quick list of reasonable options, etc,  but here there is no problem as the original 3rd game was run by the same written order method and the orders for each turn were reproduced for me to follow.
Any one familiar with the rules will note that it calls for regiments to be substantially larger than the 20 men used by Don. I simply treated each company/squadron as an independent unit for all purposes.

The game began with both sides stepping off briskly then me realizing that I had the formation wrong and that the movement distances didn't match. This was easily solved by repeating the 1st turn orders while calmly reforming my companies into line. 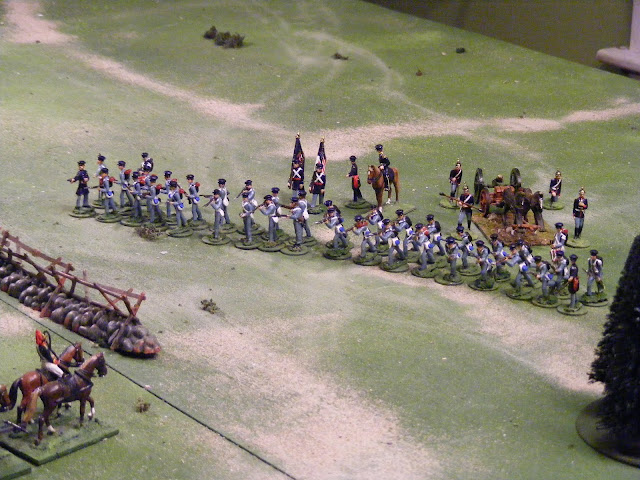 The game moved along smoothly with both guns deploying on the 3rd turn and successfully firing on the enemy. The British hitting 3 infantrymen of the 2nd infantry, the US scoring 3 hits on the cavalry which halved and then rounded up gave 2 dead. The US infantry was also in position to open fire. Neither side was at the wall but a quick check showed that my instinct was right and the wall was treated as cover not as blocking terrain if the target was beyond it but not touching. This meant that the 3rd Infantry volleys were quartered but still ended up inflicting 2 hits on the 49th Foot while the 2nd Infantry with no interference from the wall managed 3 hits on the Buffs. 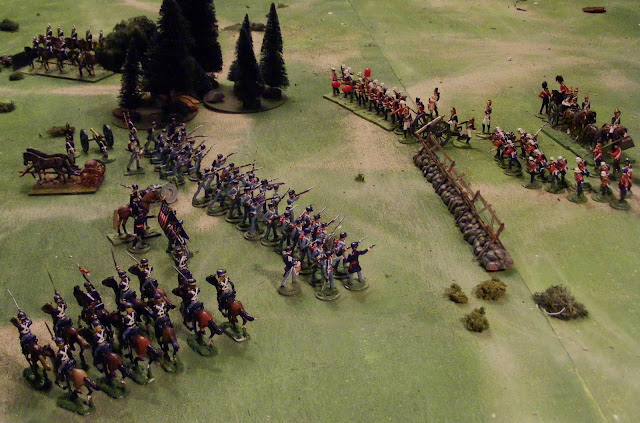 On turn 4, the GG Bodyguard charged the US gun from just beyond pinning range but the 2nd Dragoons, hurrying forward with orders to charge in support of the guns managed to get in the way and a cavalry melee took place while the US gun turned to join the firefight now in progress. The Bengal gunners were particularly effective and the 2nd infantry was perilously close to going understrength. The cavalry melee saw the British with a slight advantage but a die roll determined that there would be a 2nd round. This was a big relief to the US artillery as it meant that even if the British won, their cavalry  would be out of it until turn 8.

Turn 5 saw the firefight continue with the US suffering from an ill judged order to advance 2" into 12" range. This meant yet another turn where the gun had moved slightly or turned and therefore had to dice with odds meaning that the gun was unable to fire. They had been lucky so far but not this turn. Perhaps there was a  brief rain shower as none of the fire this turn was particularly effective. The US general finally woke up to the dangers of hanging about under close range cannister fire and ordered the 2nd Infantry to advance. The cavalry was unaffected however, and when the dust was settled the 2nd Dragoons had to surrender a prisoner and rally back for 3 turns. The GG Bodyguard rallied their 2 turns on the spot, watching the enemy artillery with a wolfish gleam in their eyes, or perhaps it was just the gloss varnish. 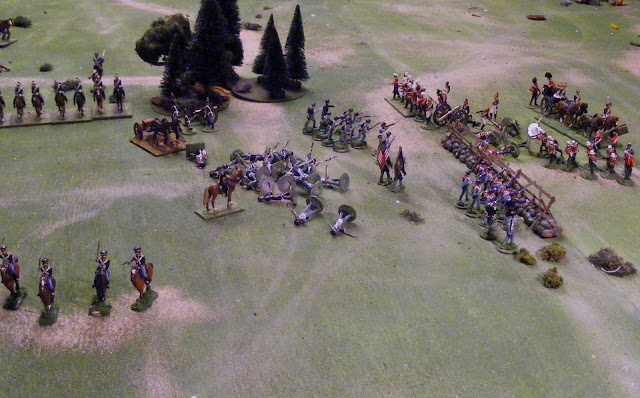 Turn 6 saw the tattered remnants of the 2nd Infantry stepping forward again  and declaring  short range musket fire against the Bengal Artillery, silencing them. It was a bit late though and the fire from the British infantry was enough to reduce both US infantry units to below 1/2 strength and on the next turn they commenced their retreat.

Turn 7 saw the US gun retire 6", wheeling to face the cavalry but again failing to fire as they did so. (Perhaps if they weren't using an improvised limber drawn by 2 scrawny horses, they might maneuver better)  The remaining Bengal gunners managed to roll a 1 and miss while the British infantry crossed the wall and began a menacing advance.

On Turn 8, the GG Bodyguard rallied and spurred forward against the gun which was now covering the retreat of the US army. The gunners managed to bring down one cavalryman before they were over run. 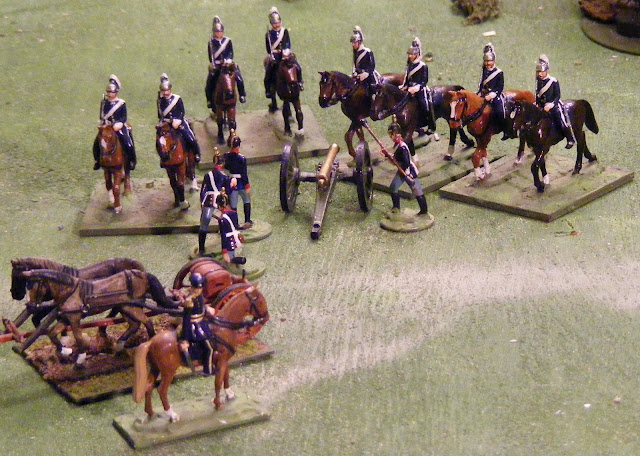 Round 1 to the British.

Tomorrow, on to Black Powder.
Posted by Ross Mac rmacfa@gmail.com