The 2nd run through of the sample game from Don Featherstone's Battles With Model Soldiers (see 9 April post) was fought using Black Powder. Coincidently this was also my 2nd game with these rules, my first solo one. I hoped that the combination of alternate moves with the uncertainty of the command rolls would make this a good set of solo rules. They are, but, while I like saving throws enough when I'm countering an opponent's fire or anxiously watching  him try to counter mine, not for the first time, I found saving throws tedious when I'm playing against myself, possibly its due to not knowing who to cheer for. Conceptually the Red army was supposed to be the "good  guys" and the Blue army the "bad guys" but I've grown very attached to my Boys in Blue.

I declared all units to be standard sized and used the generic template for stats except that I gave the cavalry the  marauder rule which allows them to operate on their own as they did in the original battle, and gave the infantry the square ability and first fire. Each side had just 1 CV 8 general.

The game got off to a slow start with both commanders just squeaking out 1 move for all units.  On the 2nd move things began to be interesting. The US general decided on a brigade order to the infantry and guns to be followed by a separate order to the cavalry. The 1st order was for the infantry to advance and wheel left, the gun was to move to the left flank. rattle rattle, roll....boxcars! A Blunder! Another roll and a quick check of the chart and yes all units move to their right! ("Hayfoot, Strawfoot", came to mind followed by the voice of the old drill sergeant "YOUR OTHER LEFT!! sir" ). This ended the US turn leaving the cavalry stranded. The British, calmly advanced 1 move again. 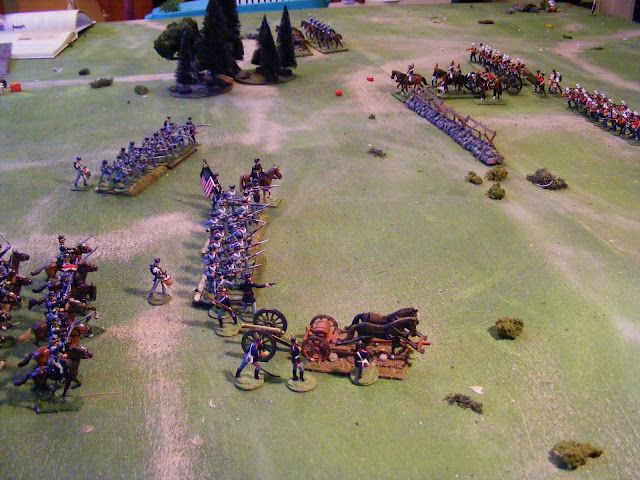 On the 3rd move the US infantry and gun advanced in the proper direction and opened fire counting the target as not a clear shot due to the stone wall. The Dragoons, bemused perhaps by all this marching and counter marching refused any and all orders. The infantry and artillery fire succeeded, after saves,  in inflicting 1 hit a piece on the limbered gun and the 49th Foot but more importantly, a 6 had thrown the gun into disorder. This meant it was immobilized, no doubt held up by the need to cut the traces to a dead lead horse.  The rest of the British units plodded forward 1 move and opened fire with minimal effect.

On the 4th move, The Dragoons finally shook out and moved left, the infantry and guns stood and fired to little effect. The Bengal Horse Artillery was now clear to go but upon being ordered to unlimber, refused, ending the turn. Belatedly, I remembered that limbered artillery and march columns always get at least 1 action unless there is  a blunder. I went back and unlimbered it and they fired a salvo into the ground. The infantry fire on the other hand now disordered the 2nd Infantry.

On the 5th move the cavalry  units finally clashed while the firefight continued. With 8 dice a side and a charge bonus meaning 3 or better to hit casualties were steep despite some good saving throws. The GG Bodyguard suffered worse with 4 hits and lost the melee, shaken with an excess casualty. A mediocre morale throw of 5 on 2 dice was not quite enough to stop them from breaking and fleeing the field while the US Dragoons swept forward. (an after combat bonus move referred  to as a "sweeping advance".)  It was now the turn of the  British to blunder and an order to the Buffs to face the cavalry became an advance instead, resting their flank on the woods.  (not as dumb as they look). This ended movement but the British fire inflicted another hit on the 2nd Infantry leaving them disordered and shaken. 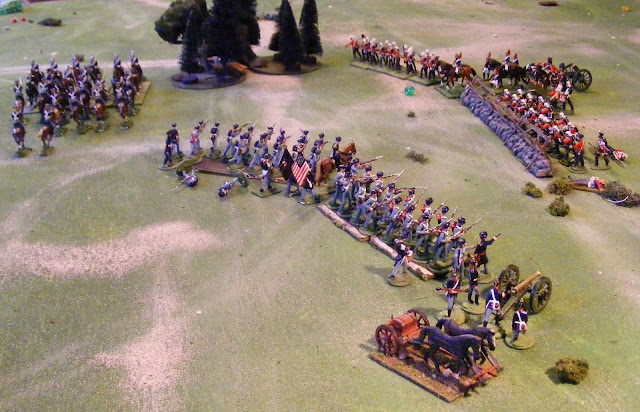 (this is the point at which the batteries in my camera gave out)
On the 6th turn the 3rd infantry and the gun used their initiative to move forward into close range, then failed to hit anything. The 2nd fired at reduced effect but were lucky and disordered the Buffs, delaying any charge. The cavalry,ordered to charge the guns but doubtless too tired to gallop anymore but too canny to get too close made 1 move and stopped, just beyond 12" from the gun, in other words, just too far away to allow the gun an automatic reaction during the initiative phase. The fire from the 2nd infantry and the US artillery disordered both British regiments. This left the gun as the only unit eligible to receive an order, of course since they had refused every other order, they saw no reason to obey now and failed to face the cavalry and also failed to hit anything. The disordered Young Buffs, however,  poured in a heavy fire routing the 2nd infantry. 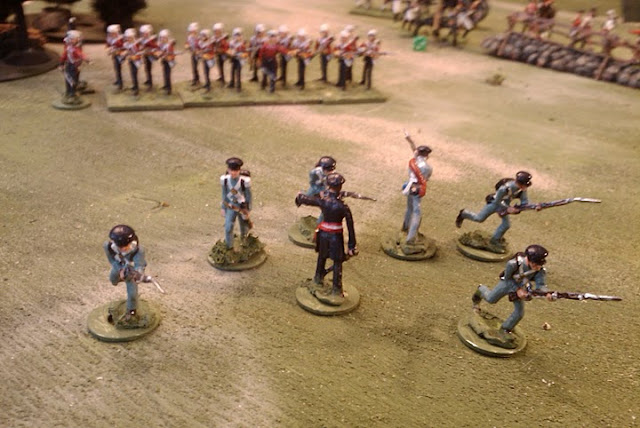 On turn 7, the 3rd Infantry wheeled back to protect its flank left open by the rout of the 2nd. The cavalry gleefully accepted an order  to charge the flank of the gun, over running it and continuing on to roll up the 49th from behind their flank.  The Young Buffs faded back into the woods and were allowed to go. 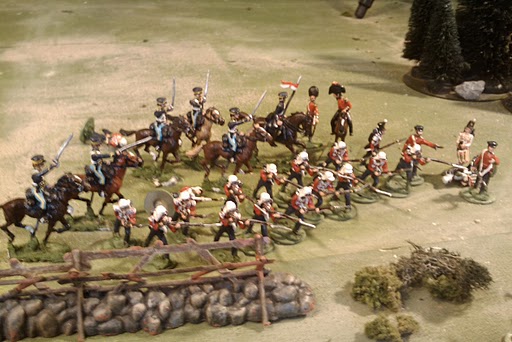 Round 2 to the US.
Tomorrow, or maybe Monday, With MacDuff To the Frontier meets Featherstone.
Posted by Ross Mac rmacfa@gmail.com