All things in time

Back in the early '80's I found myself out of the navy, married, with a temporary job and flat broke. Nova Scotia is an area that people often leave to find work while military personal transfer in and out so I also found myself in between wargaming circles. I decided that I needed a new wargames project, a budget one. MPC had just re-released some Airfix kits so I picked up a stack of ACW figures, painted 48 a side (4 x 12 Yankees vs 3 x 16 Rebs, shuffled them aimlessly about the kitchen table with Featherstone in hand once or twice, and then life returned to normal. Those 1/72nd plastics were relegated to this box, then that one then dumped unceremoniously in a big bin of mostly unpainted plastic figures but I couldn't quite let go of them. (My very first sets of Airfix were a box each of Rebs and WWII Russians given to me one Christmas, I played Hungarian revolt with them!)   I doubted that I'd ever finish the 1/72nd project, not after building ACW armies in 15mm, and 54mm (I have 200 or more ACW 40mm figs from 4 manufacturers but I'm pleased to say that none have been painted as ACW). Then at Cold Wars 2 years ago I saw a marvelous  1/72nd/22mm game and it got me itching.

What do they say? "Look for patterns?"
Last week, after another enjoyable 1/72 AWI game with Jerry, we got to talking. Jerry is a 1/72 plastic fan and he had a bunch of unpainted rebs, I still had my 100 painted and another 200 or so unpainted, we both like ACW, so......... 2 days later I just flocked the bases on my 1st unit of Black hats in mid-war campaign dress (ok I painted a bunch of marching rebs in blue, I'm sort of backing into this, I'll figure out who is who as I go along), rebased and flocked the old guys, have been eying PSR and http://www.musketminiatures.com/ and "tramp tramp tramp the boys are marching". 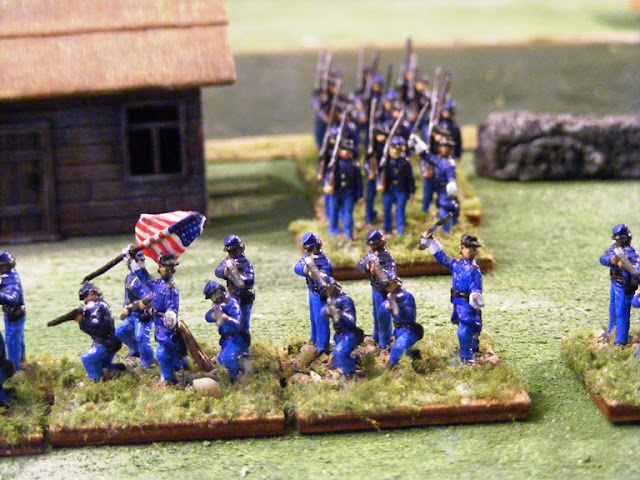 I dunno, they may have minor issues but they still hold up to my eye, esp the marching figures. These are the 28 year old (yikes) guys with  with basic shading & highlighting completely hidden by a  new coat of gloss varnish. Ready for Black Powder or Morschauser Meets MacDuff.
Posted by Ross Mac rmacfa@gmail.com