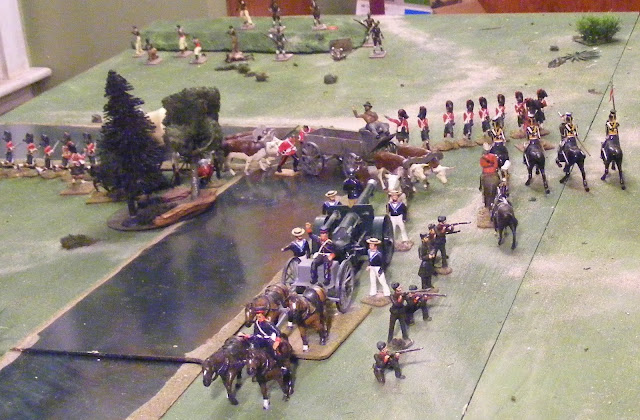 Turn 1, The rebel advance guard shows up, the British deploy and score a hit,
while the train rumbles on.

I was planning to write this game up but frankly it wasn't worth it so I'll let the captions tell the story and concentrate on comments on the rules. The original teaser is designed for much slower moving rules so I advanced the possible arrival times, essentially counting each turn as 3. 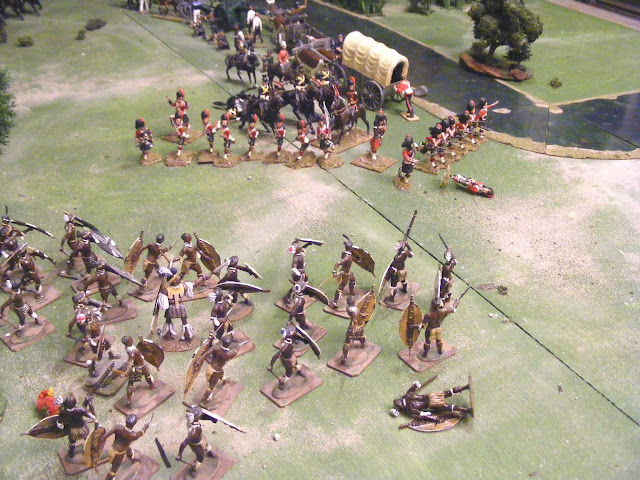 Turn 2. The main force arrives and surges across the table while the advance guard cowers. The shooting 1 die per Zulu unit proves deadly with the 1st company of the Black Watch with its flank exposed becoming disordered as well as suffering a hit and the Lancers also being disordered. Luckily for the Brits, the 2nd company was able to come up and cover. 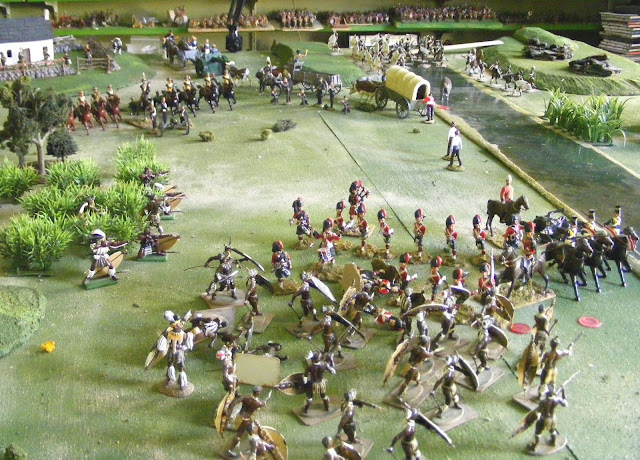 Turn 3, the Zulu flankers miss a chance to come on and the Main Body refuses to charge the open flank. The Brits shuffle and the wagon train charges 3 moves forward. The 4.7" gun team was able to leave the table but since it is standing in for 3 wagons in the original, I just stopped in on the edge to let the Nku Khu have a go at it. On turn 4 the Zulu main body charges in and begins a prolonged melee while the flank guard rushes madly forward and manages to snipe a wagon into disorder. On the British half, the gun moves off table, 1 wagon moves to safety while the other gets screened and 1 unit breaks out of melee while the other falls back. 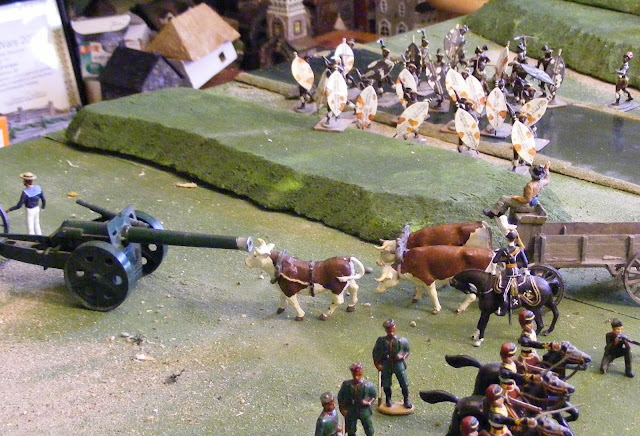 Black Powder is aimed at a table full of troops but since they include a low level Zulu War scenario with a handful of companies, I thought I'd give it a go. This is a rare outing for these troops, they haven't seem much action since I fell for 40mm glossy toy soldiers. I still like the old Britain's style and the Call To Arms Zulus are a good fit for them but having picked who was going on table, I'll admit to still not being keen on the larger new style plastics and metals. Since I am able to base my old Britain's (inc recasts) on 1" bases, they don't actually take up much more space than 28's and I could easily have fielded 20 man British units (2 deep)  if I'd had enough Zulus to face them. However, one of my old problems cropped up, the wagon train just takes up too much space so instead of the 8 wagons that the scenario calls for, I settled for 3.

Each side had 3 brigadiers plus a general. I was hoping that this would be enough to prevent 1 or 2 command rolls dominating the game. It didn't work. Even though my table is 6 ft by 8 ft, by using inches, the wagon train surged across the table too fast for the natives to have a chance to catch it. Having variable arrival only made it worse. In the event the game moved quickly but too quickly, it lacked the suspense and the build up to a dramatic finish which I am used to in this sort of scenario and I felt fairly superfluous, the whole thing seemed to hinge on 1 or 2 command rolls.

With hind sight, a rule saying that the oxen can only move once per turn might have helped the scenario develop but I doubt it, the moves are so long that the natives are in contact in no time then its all down to some dice rolling. The stop/start feel of the command system and random feel of the combat, especially, the paralyzing disorders was only exacerbated by the small number of brigades and the small numbers of units. If I had more Zulus or decided to fudge, disregarding looks, I would double the ranks on the Brits and halve all distances but double the number of companies on each side. This would make the rifle fire feel very short and make the artillery more or less irrelevant but might make the game flow better with command decisions seeming more important and with the game not balancing on the 1st couple of command rolls for the wagons.

However, after an enjoyable run through of the Alma river scenario today at Jeff's place using 15mm Nappy's as stand ins, I've had enough Black Powder for 1 week. The table is still set up though and I've just run through the 1st two turns of an original Colonial MacDuff game. Feels good so far but then this is the sort of thing they were written for..
Posted by Ross Mac rmacfa@gmail.com