OK maybe not that guilty, its not like I've been playing many ultra-historical games with thousands of carefully painted figures on dioramic terrain lately. Anyway, Ron and I have now played two Grant/Asquith scenarios with 25mm SYW miniatures and a modified version of C&C. 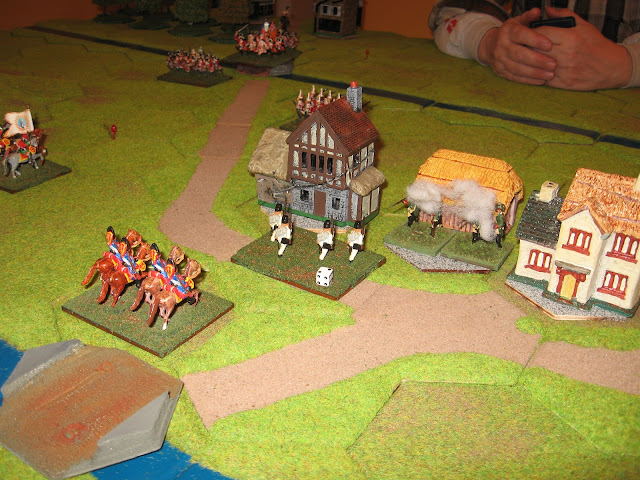 Taking the Initiative 1, scenario 20 from "The Red Book"

Last week I took command of the British and their allies to stop the Austrians from seizing a series of river crossings, or rather not stop them. After being consistently down, I struggled back to parity, next player to lose a unit would lose the game. With two infantry units, each with a general attached, entrenched in the town, with a fistful of cards giving me combat bonuses, I just had to withstand an attack by one unit of Grenadiers. I had taken 1 hit on the unit under attack but the defensive benefit of the town meant that he only had 3 dice so all 3 would have to hit.

Inevitable I suppose. At least my Highlanders survived the game. 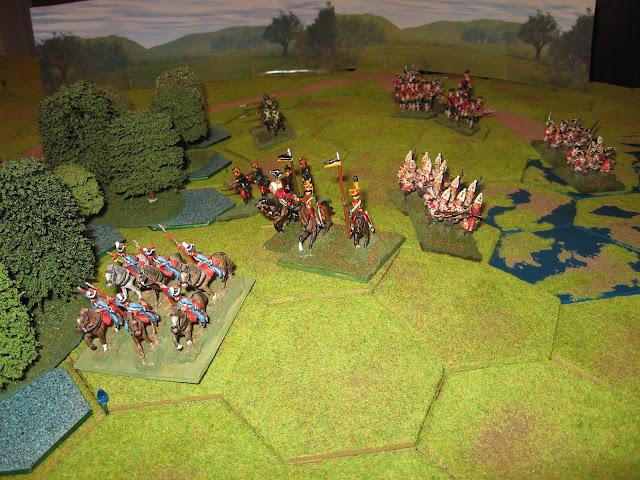 The British and assorted imaginary Free Corps pour onto the field.

The British force is a somewhat polyglot one. The core are four battalions of Old Glory infantry that I abandoned when I got out of 25mm SYW a dozeen years ago. They are supported now by my refurbished 30mm figures but since these tower over Ron's Minifig Austrians, I prefer to rely as much as possible on the smaller guys. This game called for a number of light units and these  were supplied by various Napoleonic figures, Warrior, Hat & Minifig recruited into imaginary irregular units.

The scenario was the next one from the Red Book, Initiative 2 or Scenario 21. This is a small one and we actually played the scenario twice, once using 2 units per scenario unit then once again with only 1 unit per unit. In the first game, the cards made it easy and the dice backed them up. It looked like it was in the bag when we broke for lunch but Ron's no quitter and he fought his way back into the game   and made me sweat for my victory. The 2nd game was fast and furious without the depth of the first but still fun and neck and neck down to the last roll. Too fast and furious for photos. 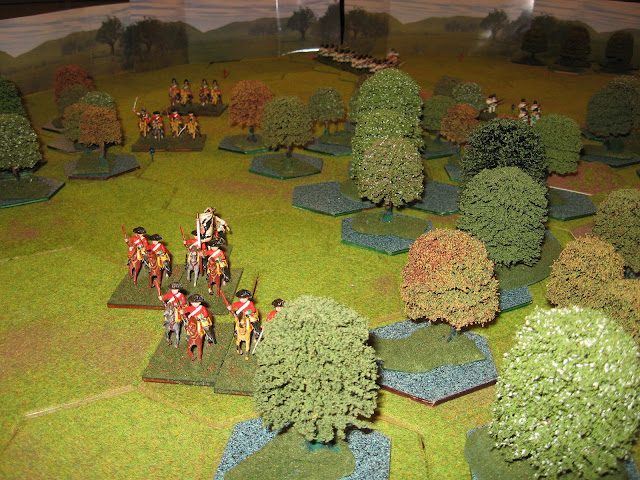 The Austrians, Minifigs all, advance rapidly.

Sharp eyed viewers may notice the red and blue markers poked in between some of the hexes. These mark the C&C zones. Since this scenario calls for the opposing armies to enter on adjacent sides of the table. Ron marked out Blue & Red's zones at right angle to each other. Took a little bit of fudging but it worked.

For those who are curious, the adaptations were partly a matter of  picking unit types but we did make a few changes. Since we play on a table with roughly twice the  number of hexes, we have introduced a march move allowing infantry to move 2 hexes without battling. If they do so they are at a disadvantage if attacked by cavalry. To add some SYW flavour we dropped the squares and instead cavalry attacking infantry not on the march only hit on infantry symbols to represent the disciplined hedge of bayonets and fire. We also made the drastic move of not reducing firepower with losses as this seemed to favour the offense too much for the SYW. We have discussed other changes but the less we change, the better therefore, so far, that's been enough. 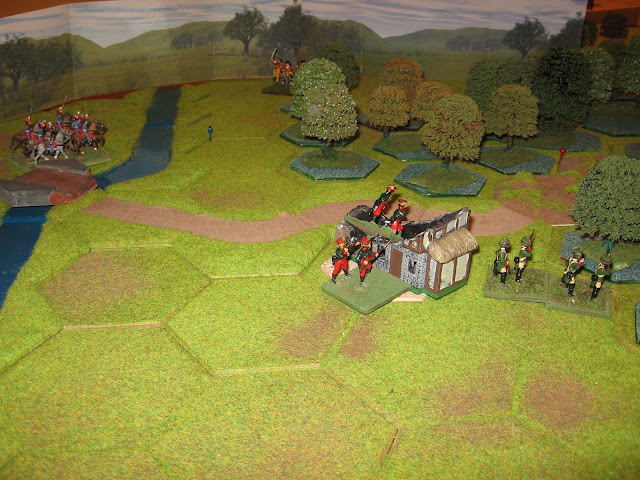 Gratuitous shot thrown in because it is the only one of the new light unit with buff small clothes. 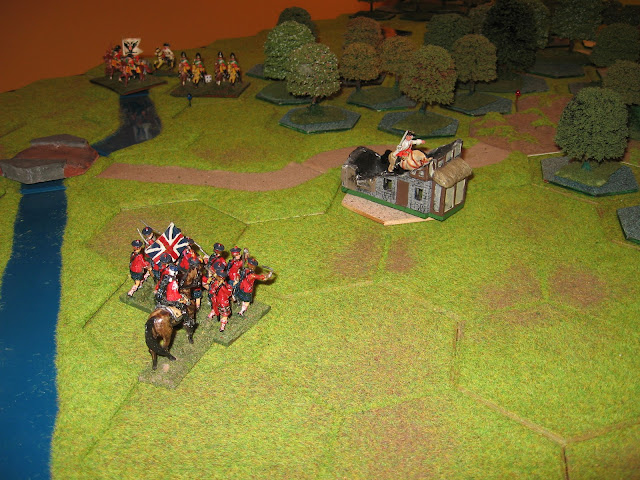 Minutes earlier there was a unit of Grenadiers in the small farm. Then the Highlanders fired with a bonus and  deadly effect. Instant Kharma in a Kilt.