We now return you to Raid on Pointe Aux Trembles

Having disposed of domestic duties, I turned back to the important stuff. Refighting the 1759 Quebec campaign was not really on my radar at the start of this year but somehow after refurbishing 2 English regiments it suddenly seemed only fair to let the armies fight. After all, they've been waiting 40 years for a chance to go at each other.  Somehow three line units against nine line and 4 light didn't seem like much of a line up and those 2 stand units weren't going to fit well on my gridded board anyway and I wanted to try it out again now that I have added a frame to take a bit of the warp out. I idly dropped one stand on the grid figuring it would look lonely but it actually looked ok as a unit. I must have been hanging around Bob Cordery and his Portable Wargame too long! 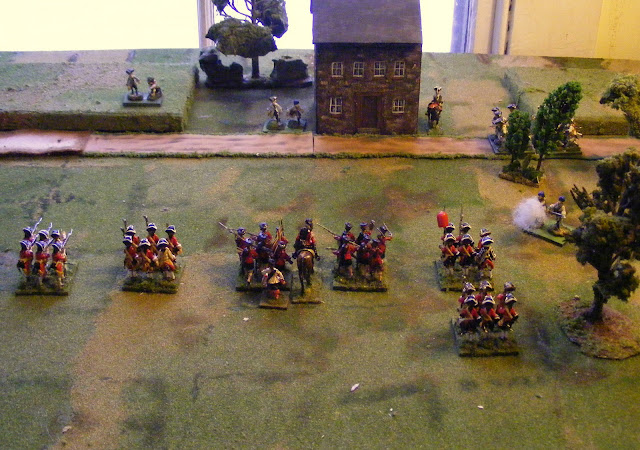 The British advance on the French supply depot as French reinforcements arrive.

Somehow six stands of 30mm troops don't really look like an army to me but then there were only a few army level engagements during the campaign so I'm quite happy seeing them as a detachment of a few companies engaged in the frequent clashes as the British raided up and down the St. Lawrence. I was going to just trot out a  Grant Teaser but instead did a trimmed down version of a scenario inspired by one of the raids on Pointe Aux Trembles. Rob Dean and I did a larger version of this as a 40mm  MacDuff game at Cold Wars 8 or so years ago and it went well. I was lacking troops and terrain but stuck with the basic concept that the British have to advance from the river, capture and destroy the French supply depot and then make it home.     The French start with a few militia and Colonial troops on table and roll for reinforcements. In this case 1 for regulars, 1 or 2 for more militia. I also rolled to see if any of the Canadian troops were in ambush positions as the British passed woods for the first time. The rules used were Square Brigadier. 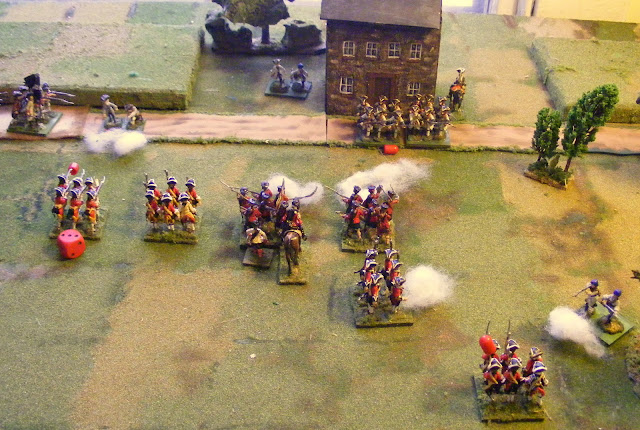 The battle heats up as more French Regulars arrive.

With no enemy visible, the British lined up and advanced on the depot. As they neared it Canadian militia skirmishers popped up and began a deadly fusillade.  (over the course of the game they nearly monopolized the 6's) To balance the 6's rolled by the militia when firing, the French also rolled lots of 1's, for reinforcements of course. The British had their share of 1's though, mostly on Order rolls but then it was Brigadier Murray's 1st action as well as his 1st command. 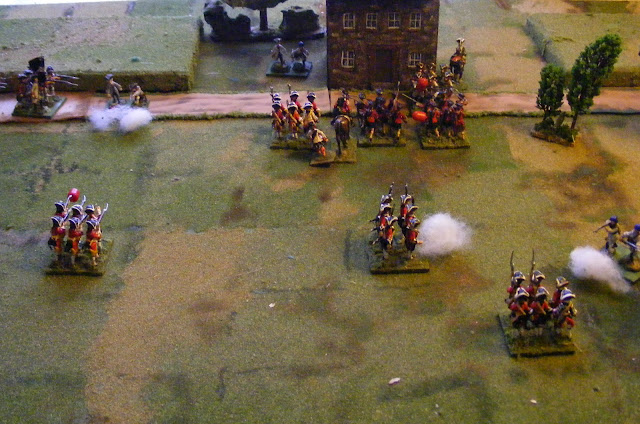 The Highlanders charge and after a tough fight, break La Sarre while the 15th Foot drive back and then rout some militia..

I was a little uncertain on troop classifications and began by counting all the British as Elite, the French as Regular and the skirmishers as Irregular saving the Militia classification for close order ones. Upon reflection though I had no justification for that as the French regulars were not yet diluted with militia in the ranks and it left no room for combined grenadier units on either side. The skirmishers also proved nasty as they could almost always avoid shooting casualties by giving ground. Without artillery or rifles, the line infantry was reduced to huddling under their fire trying to rally or else being drawn forward in piecemeal attacks which pretty much sums up their situation on the day. So part way through the day I downgraded the British to regular and the skirmishers to militia but made the Highlanders shock troops with a charge bonus. 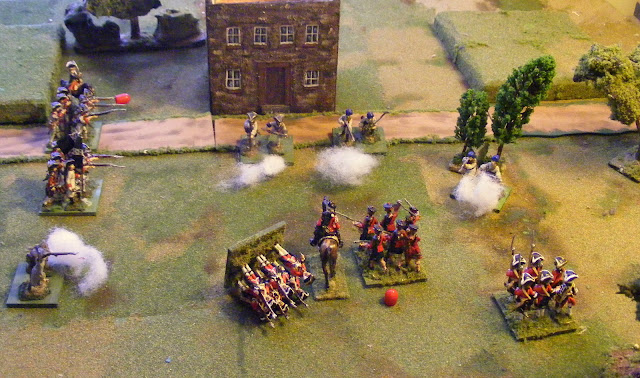 A victim of their own success, the Highlanders follow up but fail to carry the house and the Brigadier is wounded. The remnant of the force pulls back and rallies but eventually breaks under heavy and accurate skirmisher fire and runs for the boats.

Six stands against four, growing to ten is about the minimum size for a game but it gave me an hour of enjoyable distraction and was just the sort of thing I had in mind for my card table games. (btw as a bonus, the frame lifts the board just enough to put the figures out of Iggy mouth reach even when standing on their hind legs and they had to content themselves with hoping I didn't see them trying to grab dice or markers from under the board or  jumping into my lap.)

At a pinch I could squeeze two stands into each square making the game look better but that would be double the number of troops to break out and stow away (not to mention buy and paint) for no change to the game itself unless I switched rules. When/if I finally collect enough 30mm troops to fight the bigger battles at roughly 1:30, I will shift to the full table upstairs but when using 1 stand "company" or "detachment" units for Teasers downstairs, I will have more than enough 1759 troops to keep me entertained once I add some 30mm Grenadiers,  Rangers, light infantry and Indians and build some 30mm terrain.

The only remaining question is, would this have been more fun as a MacDuff game using centimeters instead of inches. There's really only one way to find out. 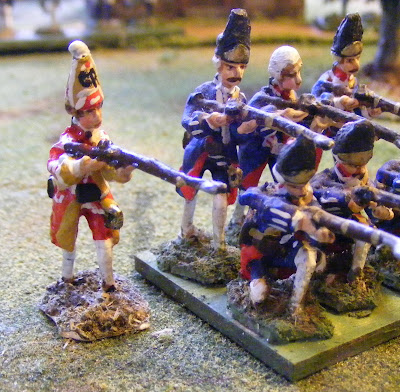 At some point during the mid 1990's I converted my unpainted British Grenadiers to French Grenadiers for service along side my 25mm French in Europe.  This largely involved carving the bobbles off the cap and texturing them with a knife to suggest bearskin. Today I took a stab at converting one back to British Grenadiers by filing the cap smooth, adding back a putty bobble and repainting. Luckily they are  fairly crude, toyish figures to start with and I'm quite pleased with the result. The rest will follow this week and then all of the original figures will be table ready at last.