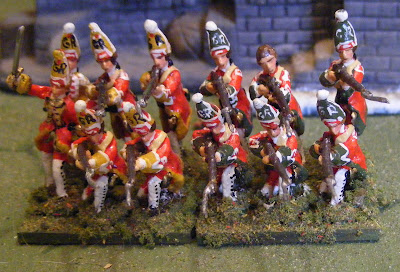 My old grenadiers, shiny and red at last!

I've finally finished refitting my old 30mm British grenadiers. At last they are sporting red coats and "real" grenadier caps and I have to say that they look better as glossy toy soldiers than they ever did as military miniatures. That's the last battalion of the old guys. There are 4 left overs that I could convert to a company of light infantry if I wanted to do the work of cutting down the coats and caps but I'll leave them for now, I've been eyeing a selection Willie and Scruby SYW & AR rangers, light infantry and Indians. In the meantime, I'm over due to get back to work on Fort MacDuff for Huzzah!

Its a good thing that I'm getting farther and farther into Toy Soldier mode. Trying to turn this old Barzso 54mm Davy Crocket fort into a usable prop for a 40mm 1812 game is even more trouble than I expected which is rare. In many ways it would of course have been easier to start from scratch but I am determined to make some use of it even if it is glue resistant.

I did have a reasonably easy conversion laid out until I realized just how much real estate the finished thing would occupy. OK for the main event but this is a game about Indians in the woods more so than the fort so I need to keep the foot print as small as practical. Forts are one thing that really test the imagination of 40mm gamers. Many of these frontier forts were tiny, given the ground scale I need to employ, the square bastion is not an reasonable size for a fort like Stevenson all by itself. but looks nothing like a stockade. I don't have the dimensions for Fort Meigs but it was unusually large, something like 9 acres and on the plans is long and narrow not square. A few calculations show that something like 6" x 15" or perhaps 8" x 12" would be not unreasonable for a foot print. That would have to include several blockhouses and batteries as well as log curtain walls, quarters and a ditch. OK for use with 10mm figures but its not going to work for 40's. Doing Marx Fort Apache style blockhouses that perch on a corner of the stockade was a tempting thought but at the end of the day it looks like I'll have to make do with one  vertical log blockhouse/bastion. 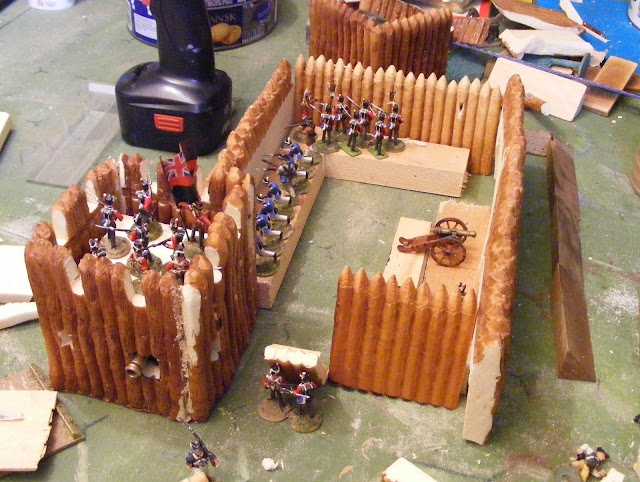 
The bastion itself is a problem. The standard sort of square, roofed, horizontal log cabin construction blockhouse was used by both sides but the British  usually put them inside the walls while the Americans used them for corner bastions and gatehouses. The British used open palisaded corner bastions which is basically what the Barzso fort had although the angles are wrong. I looked at building a proper blockhouse and may do so yet but since the darned thing should only about 1"  square from a  ground scale angle while being big enough to fold a 40mm gun and crew plus infantry,  its going to take some compromises which I haven't worked out yet.  The roof also tend to make it awkward to handle the toy soldier garrison. At least my unlikely compromise is a formidable fortification holding 2 guns and a dozen toy soldiers with all around defence should the perimeter of the fort be breached..

Then there is the ditch. This seems to have been major obstacle in several cases, deep and fraised or combined with an abatis. The abatis might work but the combination of ditch and toy soldier stockade just looks wrong and would just distort the ground scale even more.  I think I won't waste any more time on ditch ideas, it can be assumed and built into any assault rules.

So there we are, I'm only using barely 1/2 of the original fort though I've destroyed it thoroughly in the process of experimenting. The result should be small enough to not dominate the table and give the impression of a stockade while holding 6 x 8 man companies of 40mm troops. Hope for their sake that it doesn't rain, there doesn't appear to be room for tents let alone barracks!
Posted by Ross Mac rmacfa@gmail.com