I'm too far out of my comfort/experience zone to tackle this project from a Game First POV so I've decided to start at the other end, get a feel for the specific history as a starting point for tweaking the rules and then look at a wider application.

The Battle of Belmont still seems like a good starting point so I've rechecked some sources on the battle and looked again at recreating the battle. Apart from Battles and Leaders and the Wiki article, the official reports are a good start:  http://www.civilwarchest.com/node/186890 .

The 30 second version is that the Union landed, marched forward about a mile, formed a Divisonal battle line, then advanced and attacked the Confederate lines around their camp. After several hours the Rebel line broke and the Federals  captured the camp then lost all discipline. By the time the officers got the men back together, the Rebs had reformed and having been joined by reinforcements, moved around to get between the Federal troops and their steamboat transports. A second Union attack broke through and they sailed away with both sides claiming victory for different reasons. 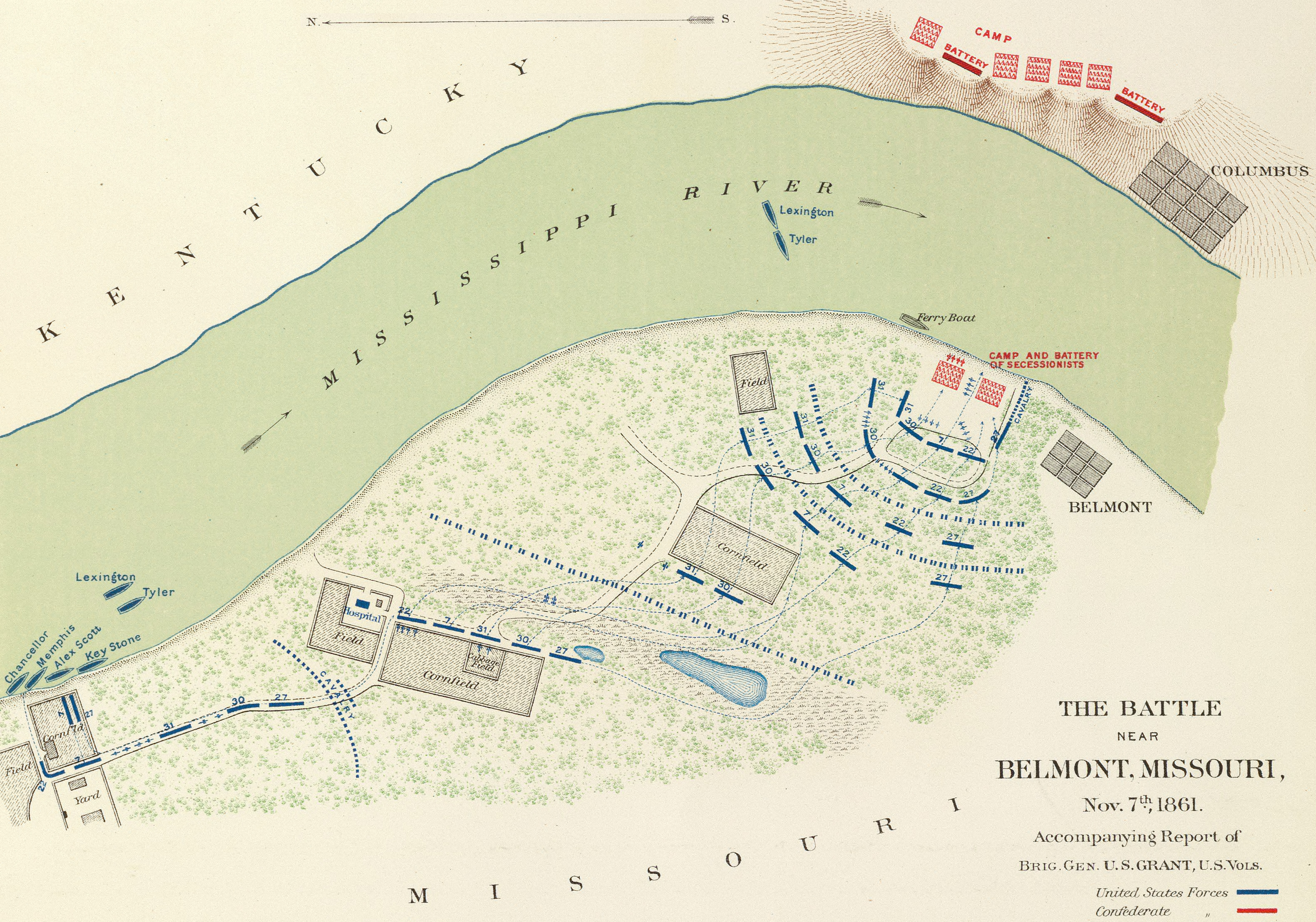 This map of the battlefield can be found on Wiki at
http://upload.wikimedia.org/wikipedia/commons/8/88/Battle_of_Belmont_map.jpg

The distance from the Union landing spot to the Rebel camp at Belmont was roughly 3 miles. The initial Union force was 5 regiments of Infantry, a battery of artillery and 2 companies of cavalry totaling  a little over 3,000 men. Translating this to my gaming board makes each grid equal to about 400-500 yards meaning all combat is between adjacent units apart from massed bombardments and each stand equal to a regiment of around 5-600 men.  At this scale you could squeeze most of each day at Gettysburg onto the small table or the whole thing on my larger but still smallish table upstairs.

Its probably not necessary to go that far though, if the scale is reduced to 150-200 yards per square/hex then 2 stands equal a regiment as in the last game and the area from the Union deployment to the camp can be shown which will cover the main areas of fighting and appears to be roughly what was used for the Battlecry version. Serious fighting will still be between adjacent units but if units are separated by one square then it may be assumed that their skirmishers are engaged.

The battlefield appears to have been largely wooded, represented in the Battlecry scenario by patches of woods interspersed with open areas. I might try a more even, open woods approach apart from the marked fields.

One thing of note is that while both sides suffered losses of around 500 men killed, wounded or missing/prisoners during several hours of fighting, and several regiments were temporarily broken, no units were destroyed.  With a one or two stand unit, either you use some form of roster or else put up with no permanent effect interspersed with periodic big losses as in DBA. The latter is probably better in game terms as it is easier, especially in a big game, but there is still something to be said for some form of attrition as long as there are combat outcomes other than destruction.

The role of generals  at this level of battle was, generally (sic) speaking, to control the troops under their command and to try and inspire the men when needed.  The rules for the latter, worked ok but I like the HofT/Macduff system better.  The ability to store order points, which was supposed to encourage planning and making choices, actually just robbed some of the suspense and uncertainty, especially since the ratio of Brigadiers to regiments was so high in this battle.  Removing the saved orders and reintroducing a points cost for detached units and for rallying disordered troops should all help.

Still some puttering before its ready for another go.