I've taken a day off and would like to be painting something new, or maybe playing or at least planning a game.  Buuuuuuut its been a year now since 4 boxes of pre-painted recruits marched into camp and while some have seen action, they have yet to re-organized and incorporated into a unified whole. That work started this week and I've decided to push on and get it done while waiting for my mold putty.

I had originally planned 6 figure 40mm wide bases but wimped out and went for 4 or 3 figures each to avoid having to paint a few hundred extra figures. The new guys were mostly on 4 figure bases of 3 different sizes of bases, none the same as my own. I would have just left them anyway but the glue was old and dry and the bases have been shedding figures every time I picked them up. I hadn't originally planned on 30mm bases but the newcomers brought enough for everyone (or close to it anyway, we'll see soon) and I can fit 2 of these per square on the small downstairs table  so 30mm it is.

There are enough figures now for me to do in excess of 30 regiments a side using my old 12 man org but I didn't feel like running that big a game on a regular basis and still have some more figures to paint, so 20 x 20 man units with 3x6 man bases and 2 markers each it is. 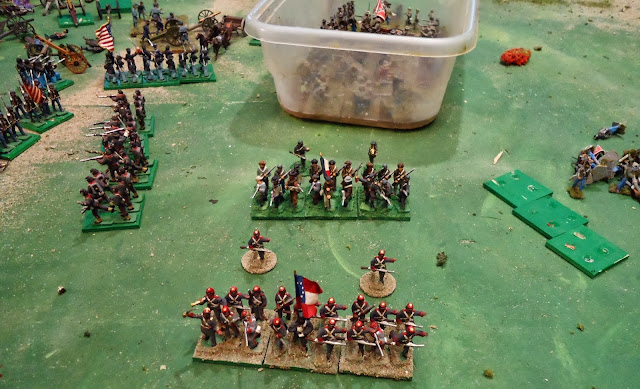 The remaining new-to-me figures were easily plucked off their bases but my own need soaking for safe removal (old plastic ankles can be brittle). Once reorganized, the figures are being glued down. Once dry, the bases are being coated in glue and dipped into sand. This helps hold the figures in place and softens the outline of the bases just enough that it doesn't bother me. I no longer have the patience to bury them carefully in filler and only notice the difference now if I pick a base up and examine it closely. Once the sand and glue is dry they get a base coat of green and when that is dry, a drybrush of light green. The result seems to blend well enough with the table to not be jarring or too unnatural looking.