Battle of Belmont, The Final Solution.

I spent a fair amount of time this past week pouring over card table/gridded game related rule, battle report and post-battle-comment blog posts from the last 3 years. It turned out to be time well spent. I was starting to sniff around ideas already tried and rejected as well as edging towards playing my usual game on an ungridded table using 1/2 scale or cm scale. A valid idea but not  one that needs me to write a different set of rules. Instead I resurrected a few ideas that I had abandoned since last year, possibly because they worked?

Well, maybe not but I've forgotten why I dropped them and some of the games which I had actually forgotten sounded like I had enjoyed them. There were some false starts Saturday night and 3 half-played games as I kept tweaking and in the end I found myself with something very close to what I was using with 4 figure 40mm units last spring just before I put the board away. The biggest difference is just that I have dropped the Pips again and tightened the whole thing.  By this morning I was ready to try the rules out properly. The result? Well, I present you with the battle of Belmont, the final take.
_________________________________________________________________ 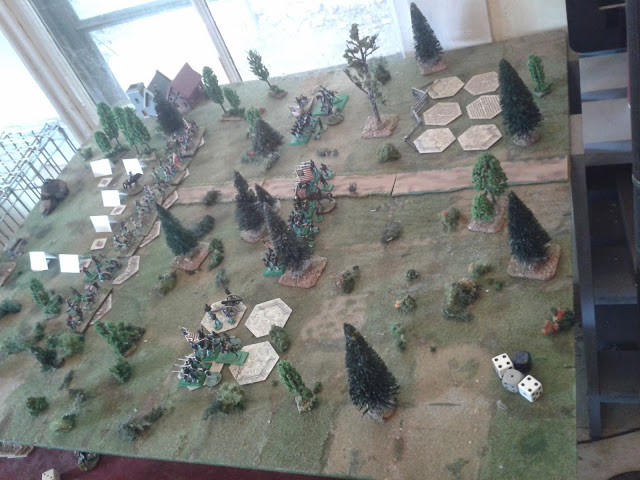 I began by going back to the map and orders of battle from Battles & Leaders.  Please imagine the Mississippi running along the table edge behind the Confederate camp on the left above and down the side of the table closest to camera, in other words, when trying to connect the map to the tabletop, pretend you are on a boat in the Mississippi when looking at the map.  Since the battlefield was largely wooded I decided to mark the clear squares and declare everything else as wooded and scatter trees and bushes about to be moved as convenient during the game.  I was briefly stumped by my lack of little 3" field squares to plop down but the Battlecry box was nearby so I grabbed field and fence hexes to drop down on clear fields and folded up some tents for the Confederate camp.  There were some apparently ineffective fieldworks so I dropped some markers down rather than going back upstairs. Part way through the game I belatedly remembered  that it was an abatis not breastworks but I don't think it made much difference and anyway it was too late to worry about it.

The original battle was fought in 2 halves, the Federals attacked and captured the camp  then got out of hand looting the camp. Rather than counter attack, the Rebs rallied their troops, brought up reinforcements from across the river and moved around to get between the Yankees and their steamboat transports upon which the Yankees reformed and fought their way through.

After contemplating various scenario rules for forced looting and rallying I decided just to rule that any Reb unit giving ground during the initial engagement would flee the table. Once all Reb units were destroyed or retreated off table, the Union regiments would reform but 3 new Rebel regiments, along with any infantry units  that had retreated off table, would arrive on the long table edge.  Victory points would be awarded for enemy units destroyed + 1 for the camp.

I initially deployed the Federal forces on their base line but realized that since the Rebs were alerted and in position and since I had removed the skirmisher markers, nothing would happen till the Yankees reached the edge of the woods so I jumped them forward.  The Rebs fought hard and inflicted heavy casualties, throwing back the Federal center twice. Eventually though the Yankees turned the flanks and Reb units began breaking back. One unit held on too long and was surrounded and forced to surrender. 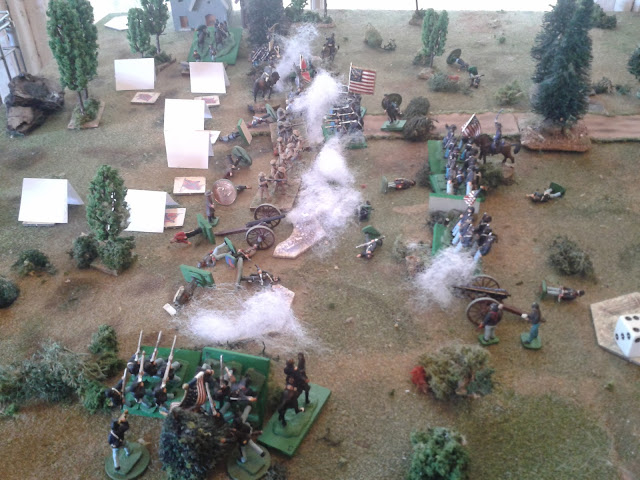 I allowed each Federal unit a rally roll of 4,5 or 6 to recover 1 hit and then redeployed both armies for the Yankee's race for the steamboats. Initially things went well enough for the Union.  A tough fight developed along the bank of the Mississippi but while the Rebs were slowly worn down and driven back, they just wouldn't rout and wouldn't let the Yankees through. 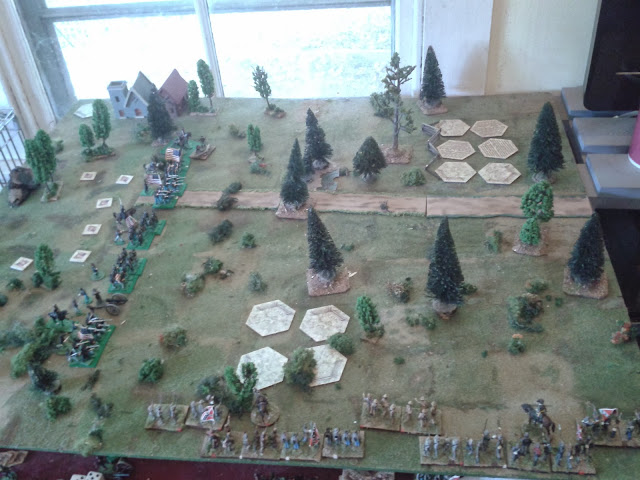 As the Federal left tried to work around the enemy, a gap started to develop and Grant had to choose whether to try to force his way through the Rebs or to split his force and try to find away around each flank. (Probably a bad choice in retrospect.) The battery and one regiment and Brigadier were left to work along the river bank. The gun provided valuable support but had limited affect due to the woods and its inability to close assault. (In woods, guns are better on the defense.) I've rarely seen worse shooting than those Yankees had but the Brigadier was brilliant. Eventually though, the Brigadier was shot off his horse and the remnants of the regiment broke just when it was almost clear to make a break for the boats. That left the battery isolated and it was quickly snapped up. 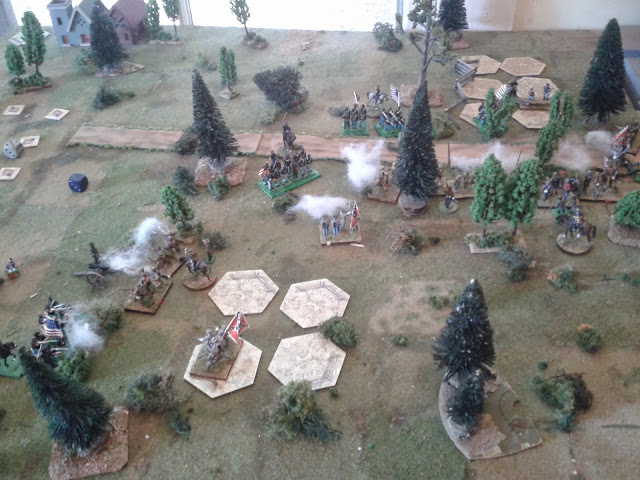 At the far side of the board, the Yanks had been making good progress at securing a corridor to the board edge. The large field came in handy for some quick moves but the Rebs were coming straight across, the shortest route and they were usually going first when they needed to head the Yanks off and moving second when they had them cornered and needed to shoot first, and when they shot, they shot straight!

It didn't help that once the Rebs were in contact, the rules against moving from adjacent area to adjacent area meant the Yanks had to go back before they could go sideways. The only ways to do that were to move second one turn and first the next or to give ground in combat and then go first. Once or twice they managed it but not often enough.  Slowly they were pushed back and back. The cavalry and one regiment got away but on the last turn Grant was shot while trying to rally his men and the remnants were cut off and mopped up.

Of the five Union infantry regiments, cavalry squadron, artillery battery and 3 generals, only 1 regiment and the cavalry escaped. The Rebs lost heavily in men but only 1 regiment was destroyed and the camp burned. A clear Confederate victory and a finish to General US Grant's career if it hits the papers! 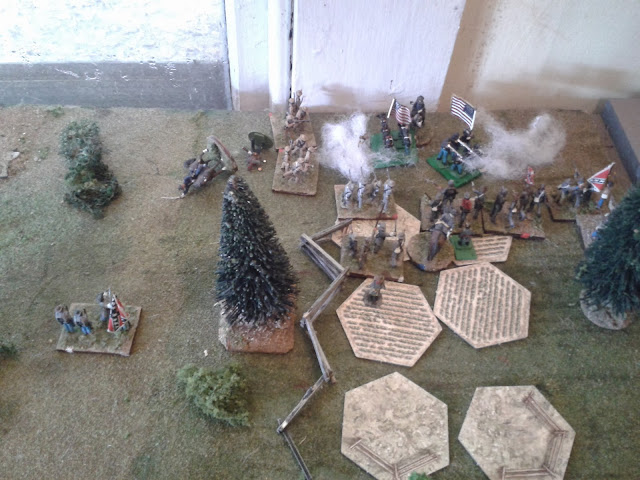 So much for the broad "what".  The game lasted well over an hour through a total of close to 30 turns although it is about the smallest size game envisaged (7 units vs 6 growing to 7). There are some teasers that size but most have at least 12 units a side and some as high as 16 units a side.

How did it feel? Game-wise, this time around, there was tension building as the game went on with crucial rolls made or missed. No one roll was game deciding but several moved one side or the other closer to or farther from winning and several times choices between player options were agonizing. The end was close to a rout but only a few turns earlier I thought the game was going the other way.

From an historical point of view, the amount of detail is low and some mechanisms are abstract  but this time Brigades stuck together so that units could support each other and so that regiments could be controlled. Brigadiers were key for that control and for their ability to steady and inspire regiments and hold them in the line. The degree of movement forward and back and the prolonged nature of the fighting with occasional collapses felt right as well.

Over all I would rate both aspects as 4 out of 5 this time (as a game it would have been better with a congenial opponent and, perhaps, a customized version of my chance card deck). I haven't down the full downloadable version yet but the updated blogpost edition is the version used in the game and can be found here.
http://gameofmonth.blogspot.ca/2013/10/square-hearts.html

I'm not quite sure what to do about ACW on the big table. Currently my units are 3 or 4 stands of 3-4 figures or regiments on 12 to 16 strong. If I stick to 3 bases I could have 20 man units counting supernumeries and could then just leave a base out when playing on the small table or I could leave them at 12+2 and just field more units.

The board needs work. With so many bushes and trees and such poor lighting, it became nearly impossible to see the grid and I had to estimate based on the occasional visible grid area. This was made worse because the Rebs were still on their old 4 cm bases so didn't quite fit inside a square and by the time you stretched down a 4 or 5 unit line you were out almost a whole square. I'll probably just pen in the corners but might try painting on stronger highlights and shadows. Actually it is tempting to do a painted hex board so that I can finish my bases the same way for both boards.

Anyway, time for some painting, and for an ancients game.