A Tiger by the Tail. An ACW affray.

Sunday's game was loosely based on an historical battle which you are welcome to guess. 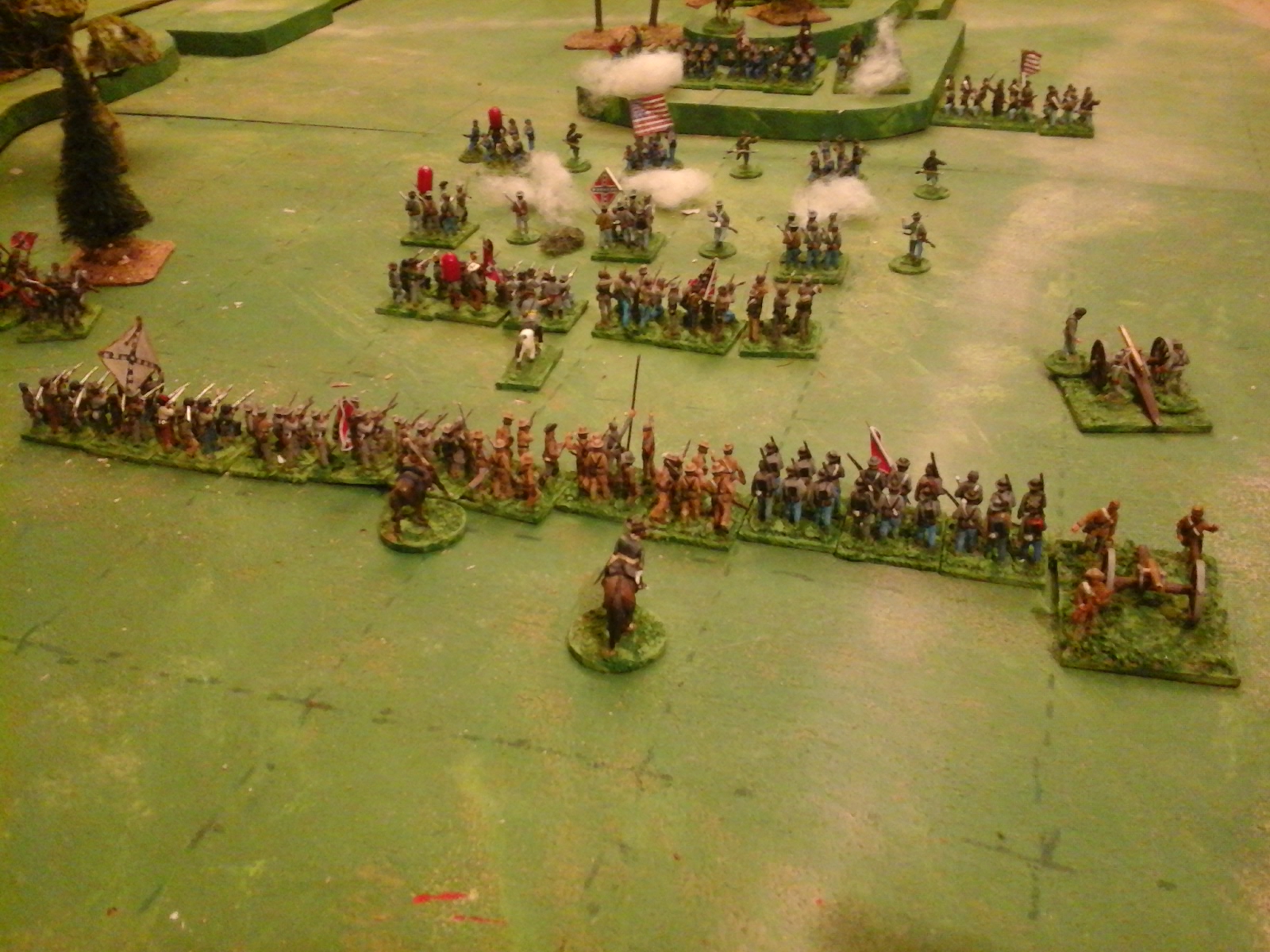 The Reb have caught up with a Yankee rearguard of a 4 regiment brigade and 2 batteries. They launch an attack by  two brigades. Three average regiments supported by 5 elite ones and 3 batteries. 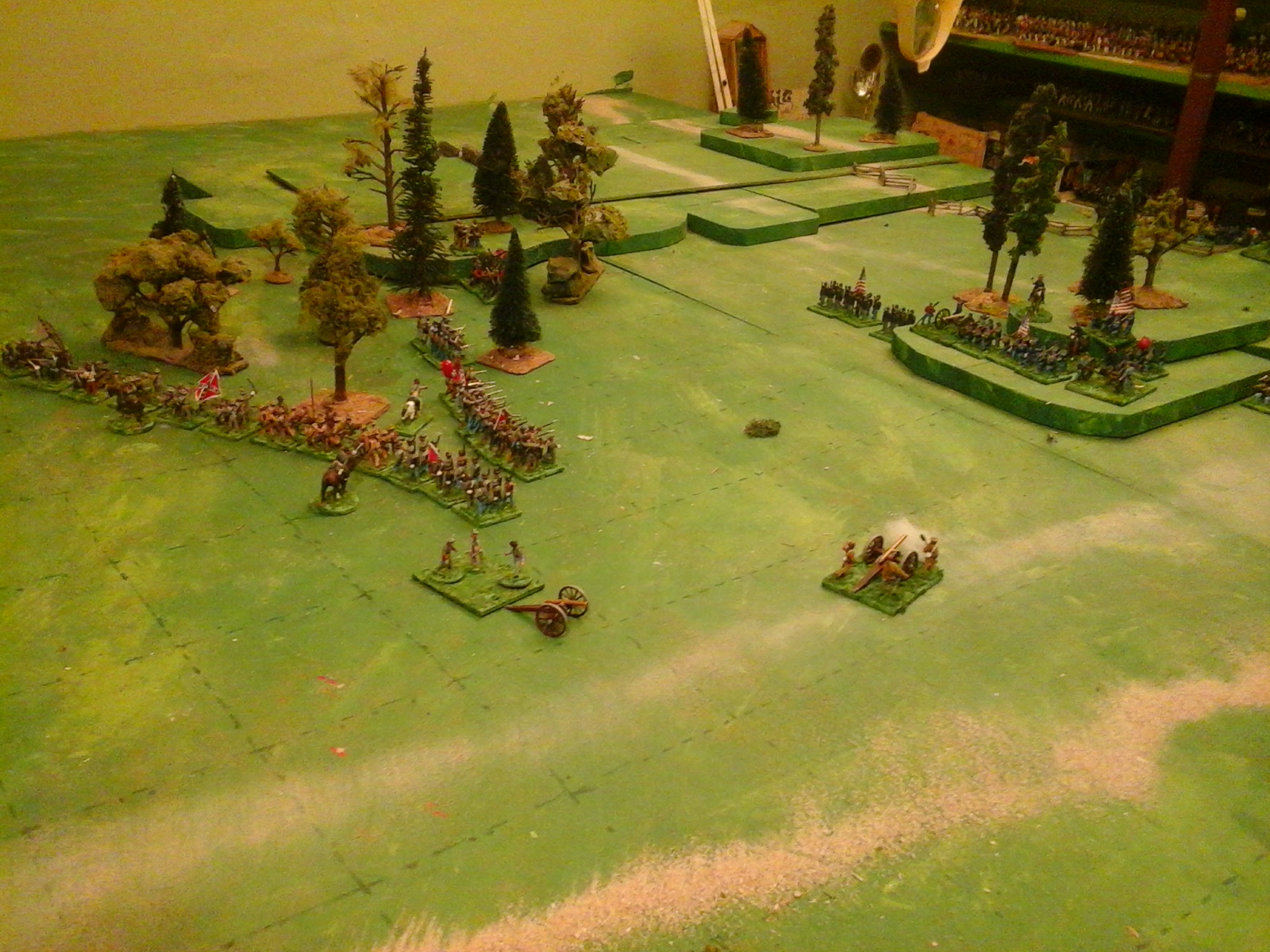 The attack took heavy casualties with little progress as did the original so like on the day I marched the Rebs by the flank to try to get inbetween the Yankees and their communications. Part way there it became obvious that there were more Yanks at hand.

This is one of those historicsl battles that sound like a made up wargame scenario. Part way along the ridge was a stone wall which the Rebs managed to deploy behind just before the Yankee counter attack hit. 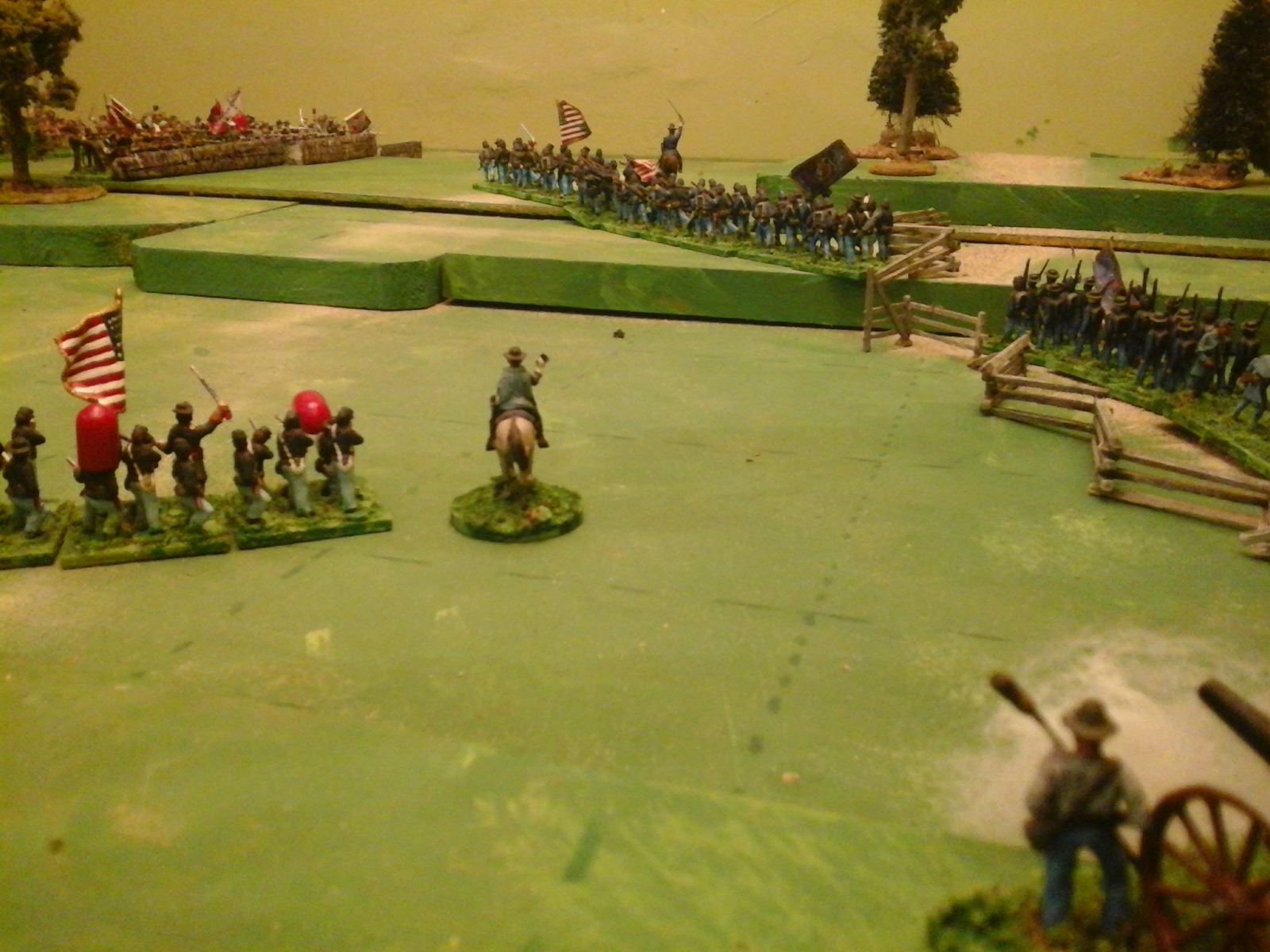 The Yanks attacked in a most unlikely formation, brigade column of divisions, 2 companies wide, 5 regiments deep, 75 yds wide and 400 yds deep according to Wiki. (Breaking out a ruler my column was pretty close scalewise which shouldn't have been a surprise.) 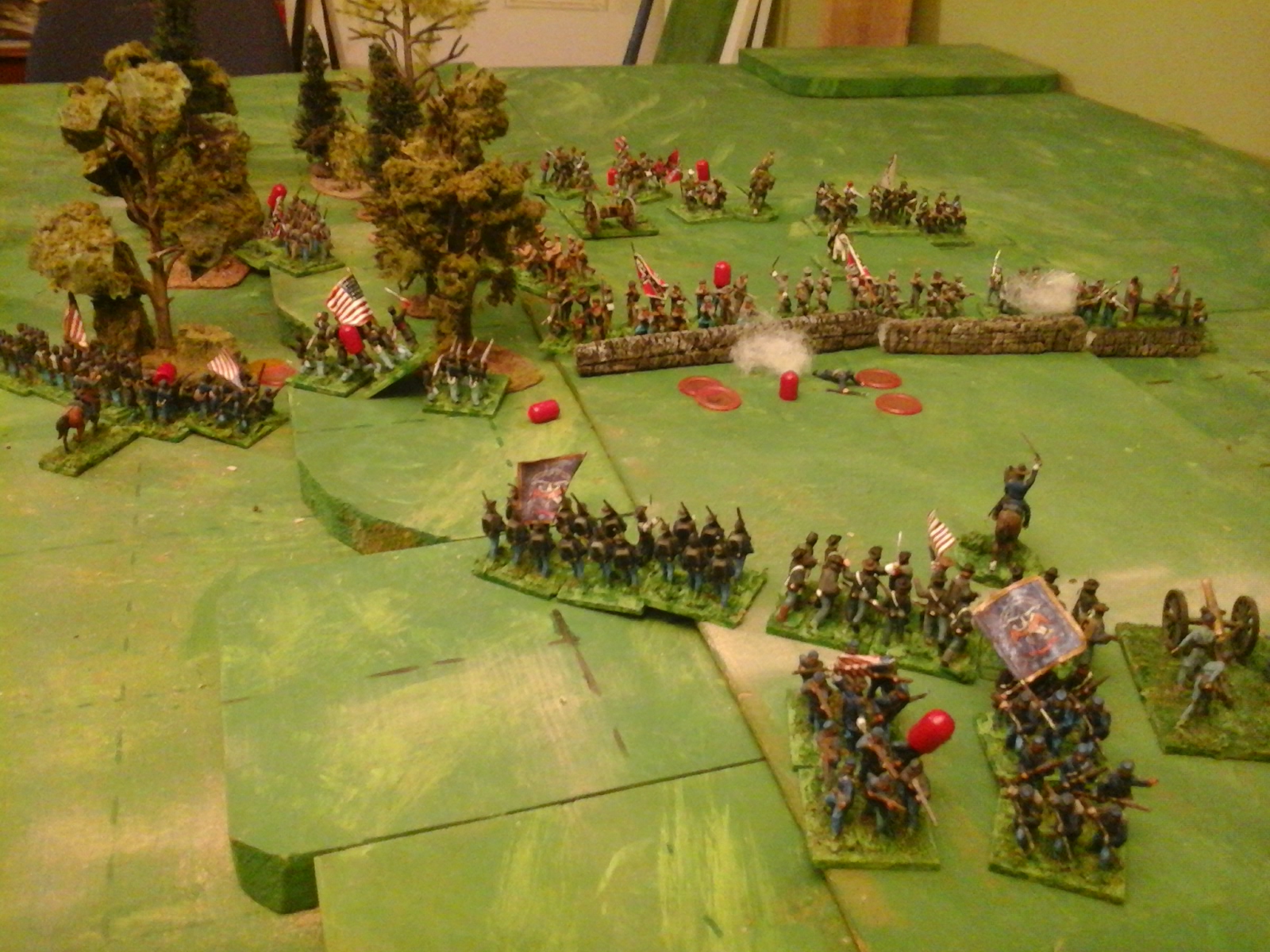 The first assault on the wall was a bit of a fiasco on the tabletop as was the original. The second go was not much better but then it settled into a firefight. The Yanks made good use of their artillery superiority and brought up their first brigade to flank the rebs. The fighting in the woods was prolonged and bloody.  Eventually as casualties mounted, numbers told and the Rebs reached their 1/3 stands lost breakpoint and gave way. The Rebs had 3 fresh regiments in reserve while the Yankees had 5. Neither was committed but they were counted for the breakpoint which is what kept the Yanks going as they actually lost 1 stand more than the Rebs. 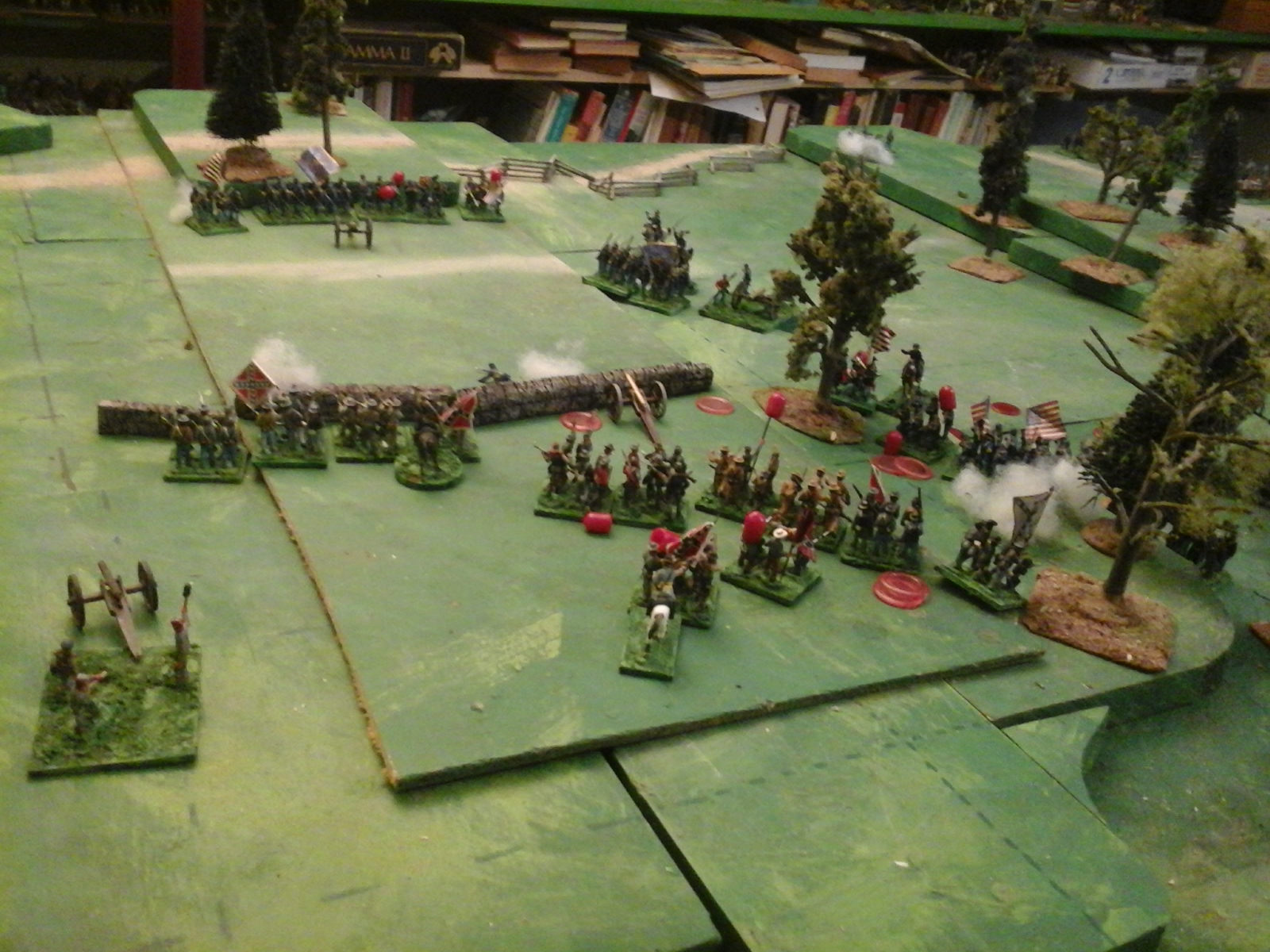 So how did the rules work?

For starters, throughout the game, following roughly the historical movements and attacks, I got roughly the right results including the end result. None of that was preordained though as I didn't fudge any of the dice throws and there were some things that could have gone differently.

The game lasted 17 turns each representing somewhere around 15 to 20 minutes. The historical battle lasted around 5 hours, so, close enough. (Only about 2 hours to play but that's ok).

But was it fun? Engaging, exciting? Simple, well paced?
Yes on all counts.

I'm not sure if I would have followed the same battle plan if I had a free hand but for a scenario for someone to play the victory conditions would have to include campaign aims in some fashion incuding the need to maintain one`s own force and compell the enemy to react and there would have to be misinformation about enemy strengths and location. Then, maybe.

But yes, all excited about the 1/72nd ACW again which hopefully will not distract me from the 40's. I had a few bad minutes pondering scales today but managed it to square it in my head and will stick with the 3"=100 yard.  The three most pressing things are to do some Division General stands and a Corps Comander stand, mark the regimental bases by brigade and regiment for easy sorting when tired, and do casualty markers. The caps work ok for hits but I would like some record for photos of where the action was hot and it occurred to me that if I had a pool of casualty figures that could be placed when a stand is removed, I could track Army Morale by issuing the correct number by brigade at the start and then when they are gone, they are gone and no need to keep counting stands which have been removed, just to be sure.
Posted by Ross Mac rmacfa@gmail.com