The problem really is those twin miniature wargaming demons: a sentimental attachment to favorite old figures and a desire to do at least a little of everything. The symptoms are that my room is overflowing with figures that get used too rarely, I don't get to play enough games of anything to really get a handle on rules etc or to make progress on playing campaigns and I end up painting figures I need for a game rather than figures I just want to paint. Most suggested solutions for this sort of problem tend to involve horrific things like discipline, self denial and so on that just lessen one's options and the variety of games that can be played. The other day a thought came to me, a drastic, horrible, thought that might ease the pressure a bit while still allowing me to do all the things I want. It does eventually involve the horrible, nasty business of letting go of "things" though so there is still hope that the solution will fail. 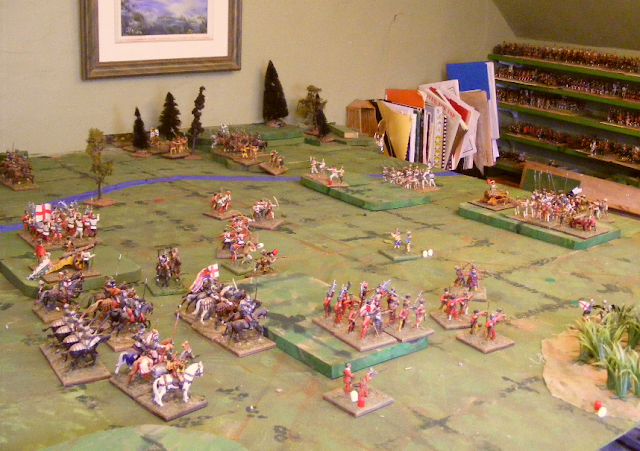 It started with a tabletop battle last month which appeared on my Gathering of Hosts blog and involved my 40mm 16thC Anglo Scots armies and a set of fantasy battle rules, which Rob Dean and I am working on, based on Morschasuer's Shock Era rules.  I was reminded how much I love these armies, which include not only a handful of toy knights which I first played with 50 years ago but also my first units of original figures. I was also reminded how rarely they see the table top these days.

After Huzzah my brain received some more material when I discovered that some Reaper Bones fantasy figures that I got from Rob were a better fit for my 40mm Elastolin Prince Valiant figures than for my OS 25mm armies. The Elastolins are another favorite collection that rarely gets out.

Then, on Friday night, I was watching an early episode of Game of Thrones and found myself thinking not only that the whole deadly mix of alliance by marriage, betrayal, murder and revolt sounded a lot like Scottish history, but that the Northern armies in Sallets and Jacks look like early 16th C border horse. hmm

On Saturday morning as I was painting some 40mm Centaurs for a Prince Valiant game I found myself thinking that my 25mm fantasy campaign could easily be fought out with 40mm figures replacing my 25 ones. This would allow me to essentially replace my 25mm fantasy campaign, 40mm Prince Valiant games and my Rough Wooing 16th games with a single 40mm fantasy project using the revived Valdurian setting from the 25's and the 40mm figures.

Since I have never really established exactly where Prince Michael's adventures take place they can easily be fitted into the northwest of the Midlands. They can be joined by various knights, pikemen and archers to defend the Midlands. The Turks and other Easterners that I have been wanting to paint for ages, along with various monsters, would become the troops of the Great King. The Picts, Highlanders, Centaurs and the like become the Men of the West while my almost unused Prince August Viking & Saxon moulds along with Elastolin Vikings, Normans and Huns become the Northern Confederation leaving the Landsknechts and puffier English to defend the Empire. Since the new rules combine "1 standard base is a unit" troops along with individual characters, I can even retain the capability to have some Prince Michael adventures that don't include battles.  Its perfect!


Well, except the bit about what happens to my old and "new" OS 25's?  Well, for now, they are hurting no one and can stay on the shelf. I can even paint some up when and if I get the urge but after the initial rush of nostalgic excitement, I'm finding that I just don't enjoy painting the 25's as much as I used to. To finish the project I need to paint a few hundred more 25's and I especially don't enjoy painting masses of 25's as much as doing a few 40's. Times and I have changed. However, an idea is not proven by thought and it will take some games at various levels, using temporary bases for the Prince Valiant figures before I make any big decisions on this one.