These lads have just been recruited into the First Provincial Regiment of Rosmark. Unlike the Household Regiments which are largely recruited from abroad, the Provincial regiments are raised in each province and provide garrisons for its fortresses and towns as well as providing troops to assist Customs Officers and Magistrates. They even provide a service battalion for the King's field army if called upon in time of war but traditionally only for service in Rosmark.

Every now and then a new unit just seems to struggle into existence.  The trouble with these lads goes back to the accidental order of an Austrian infantry mould when I had meant to order the Hungarian one. In order to make use of it I decided  to raise a Rosmark Provincial regiment. I also decided  to use the Russian tricorne head which is clean shaven with a nice pointy tricorne but of course, once I got busy casting I forgot why I had pulled out the Russian mould......

The moulds poured well with few faults but once I started cleaning up the castings, I found an uneven number of poses amongst the good figures. I'll have to even it up with the last batch.

Then I primed them and noticed the mustaches. Oh dear. So I scraped the faces and reprimed, not perfect but I was in a hurry to get started painting, hoping to finish before I went away for the weekend. Things just continued from there with all the sorts of little errors and difficulties, awkward angles, missed bits, stray brush strokes etc that can occur. Anyway I ended up putting them aside until I got back and finished them today. 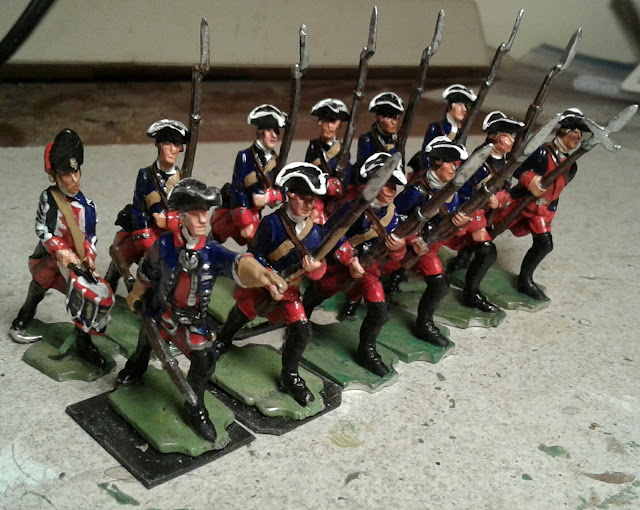 Not exactly my best work ever but they'll serve. Now to cast 6 more with the right mix of poses to have a 16 man unit with rear rank supporting arms and front rank charging.
Posted by Ross Mac rmacfa@gmail.com

Email ThisBlogThis!Share to TwitterShare to FacebookShare to Pinterest
Labels: Rosmark