Huzzah2019 Another AGW Game ( and Booty)

Nothing like a casual game to wind down after a good but busy convention.


Since Rob already had an actual   copy of A Gentleman's Wargame and   Vicky volunteered to play,  Rob was able to GM which was a big help in learning on the go.
There is a long series of sharp photographs detailing the action which no one took so this is it.

We both fielded  4 infantry, a gun and a cavalry unit but this time we used the distinctions. I went with a fire bonus for my battery and my unit which was actually aiming, plus something for the grenadiers.  I can't remember the enemy's distinctions with any certainty.

My plan was to stick my gun on the hill supported by my cavalry and a line of infantry then await attack while I carried out a long range bombardment. The resulting firefight was prolonged but the opposing lines were not initially parallel and my artillery was closer so I had a distinct numerical advantage at the start.

The result was that Vicky's units slowly started to collapse despite displaying the highest steadiness when checking morale. A sweeping flank charge by my cavalry settled it.

With Rob acting as GM we picked up on a few nuances that we had got wrong on Friday and the game flowed well. The cards and dice played their role but in the end being a veteran historical gamer familiar  with both period tactics and similar rules made the difference. The more I play the rules, the more I like them.

All that was left was lunch with friends then I bundled into the passenger seat and we were off.

However.... I did actually find something to buy this year!

Wee Wolf (https://weewolfminiatures.com/) has some excellent miniatures but they are the wrong scale/period for me these days. However, they also had some other ranges with them including  a Footsore 25mmish armoured dark age warrior labelled "Guinevere" (obviously not the traditional medieval court damsel version)    so I brought her home to join the Westfolk under the Lion Queen.

I also found some inexpensive 3d printed vehicles in what looks like 1/48th, or maybe 1/56th scale including a Rolls-Royce armoured car and a staff car. As suspected they are noticeably  smaller than  my 1/43rd   Matchbox vehicles.

It got me thinking again about resurrecting my old 30mm Marx toys for a post WW1 Colonial or Rebellion game but to me they look as big with the antique 30's as they look small with my OS 40's. 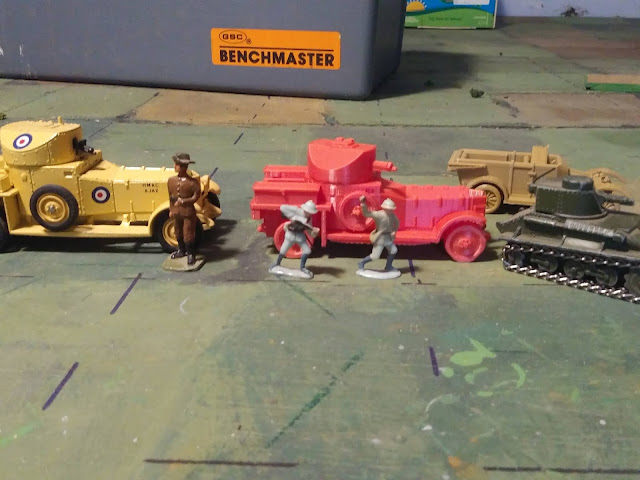 Since they'll be in a fictional setting I may be able to use the new AC as an extra light armoured car or just keep the vehicles well separated.  A decision for another day, might even be possible for it to do double duty if I proove foolish enough to buy some of the recast 30mm Marx arabs or US cavalry or..........

Well, now I'm home and infected with the plague, I have time to ponder the question of "What do I want to do now?". Straight into French Revolution? Get Prince Valiant out? Or....... Stay tuned.