Its been a few decades since I cast one of these fellows but the mould was patient and still works.

Having had a couple of New York's Lil Army moulds sent over to me from Ireland some time ago, I thought it would be proper to at least do one of each so I also dug my old sepoy mould out to make three and fired up the ol' melting pot.. 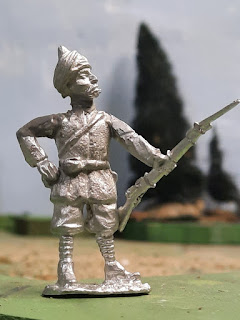 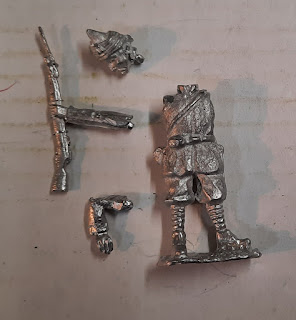 There's a bit more work to do on the other two (especially after I broke the Highlander's bayonet off when moving from desk to table to take his picture - oops) but they won't be too far behind.
Seeing the Lil Army exagerated head and detail again, I don't they'll look right to me in a traditional glossy toy soldier finish so I think I'll go the gently shaded route with these three figures like I did back when. I like to think it helps disguise the mutant look of the big heads.
Posted by Ross Mac rmacfa@gmail.com