Virtual Huzzah: Two Down, One to Go

So far I have been enjoying my virtual convention. 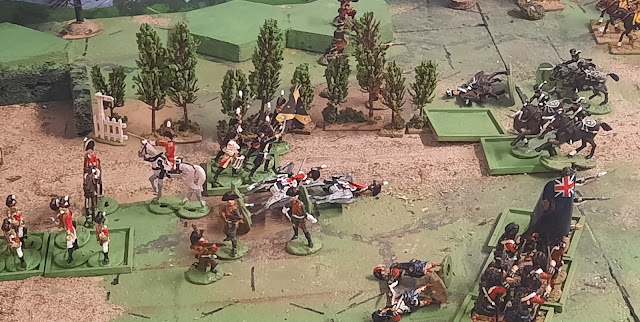 Friday Night I was a player not a GM and as a wild Balkan warrior chief of low degree, came " this"  close to over running an Austrian convoy after which our Lord and Commander was about to over run the Austrian fort when a deluge of shells from a gunboat, a battery and the fort's artillery blew the attackers to smithereens. At least they died gallantly. It was an enjoyable game with good company. The game was played with computerized rules that Arofan, our GM, had programmed.  I kinda missed the feel of rolling  dice but the system worked well and the game was both interesting and fun.

Today I ran the first of my scenarios. Unfortunately one of the players did not respond to any of the emails and didn't join the call, I'm not sure if the contact information was wrong or if something came up. However, there were still three players to carry on. I didn't think to take any screen shots in the midst of the action, but did take a few quick snaps before  resetting the table. For the first time, the attacking French took both crossing points and won the game.

Luckily, if any one would like to read a good report of my 4 player practice game, they can pop over to the Palouse Wargaming Journal and read a good illustrated battle report of the first virtual, train-the GM, game. (click to see)

One game to go but already plans are being laid for more virtual games.