It seemed like a good time to tie up a loose end.

My small, miscellaneous, haphazard, 1/72 pre-gunpowder collection, is a bit of a lost lamb, due originally to nostalgia. At last however, I'm beginning beginning to awaken to some practical advantages it might have in some plausible versions of my future. Since I had no particular "call" to paint any of the waiting hordes of recruits for my acrive collections, or play a game, it seemed like as good a time as any to revisit my ideas about having an emergency or unpleasant future situation where I had to pick one compact 'game in a box' that I could coax potentially non-wargamers into playing as well as playing it solo. A wargame that might be suitable to tempt people without an interest in military history into playing a game, perhaps those who enjoy fantasy movies and books, (LOTR, GofT, etc). 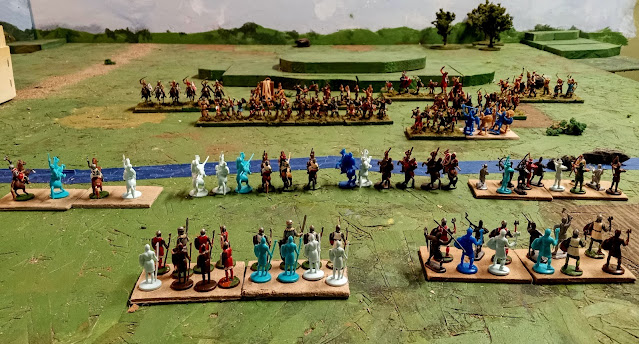 This motley collection was distinctly NOT acquired for this, or any other purpose actually.
Some might recognize the game pieces from "Feudal". My copy was a present back in the late 70's. It was a time when my collection of miniatures were in storage some 5,000 km away, and I did not know any local miniature gamers. I was reduced to being trounced regularly by a board wargaming friend, and picking up and painting whatever miniatures I could find, the best source being a small card and gift shop where I bought some Armada ships and some Heritage Napoleonics which I converted to ECW Scots to go with the handfull of Minifigs, my first 15's, that I had painted in my cabin on HMCS Otatwa on the opposite coast, a year or so earlier. Board games aren't first choice, but are better than nothing for a social activity. Naturally, I stated painting the miniatures.... I even managed to play a game or two with a friend, bless her heart. Anyway, not long after, I got posted to Halifax and my gaming drought was over, but I kept the figures largely I suspect, for the good memories of those days.
Apart from my first, brief dip back into ACW, my reconnection with 1/72nd came when Hat released the old Airfix Ancient British set. As it happens, I had  received the Britons and Romans on my first Christmas leave from Military College in '72. I broke out Featherstone and played a quick solo game but by next year, Simon MacDowall had arrived and I had a copy of WRG 3rd ed Ancients. Soon, two small airfix armies were learning the ropes. Those armies were long gone and I wasn't  doing anything in 1/72nd, but could not help supporting my local hobby shop by buying the occasional box. So, for nostalgia's sake, I bought the Ancient Britons.
The last key piece was that I had always yearned for the 4cm Elastolin figures. I used to ogle them at Eaton's and Simpson's at Christmas time but they were well outside my parents' budget. When I found out that a Revell set included  scaled down copies and later found that Orion's vikings included not only copies of some Elastolins, but also copies my old Marx 25mm vikings, well, had to have them!
So that's where the gaggle of pieces came from. At some point, I painted up two small DBA armies as a travelling game, but didn't do much with them, until Rob Dean decided to run a 6 player 1/72nd Dragon Rampant event at Huzzah a few years ago.   Since we've been co-hosting events since the turn of the century, I volunteered to bring 2 of the armies. After that they went back into the cupboard until one hot summer day in 2021 when I took the non-fantasy elements out for a quick solo game.

That was enough to make me think there just might be a place for them as a 'game in a box' at no expense.  The Horse & Musket era one I built earlier this year is fine, but the attraction for non-wargamers might not be great. Something with a wider audience was needed, possibly something for people who enjoyed Lord of the Rings, Game of Thrones, etc, and something compatible with several published rules sets as well as homegrown rules.
Shouldn't take long to paint up the last few figures, non-human units might be considered later...