When in need, improvise

Yes, another diversion on the road to a Battlegame Magazine battle game of the month.  A group of us here have decided to undertake a 28mm ECW campaign, I need another scale and period like the proverbial hole in the head but I have agreed to supply a small force of vintage (as in 35 yr old 25mm highlanders and a regiment or 2 of foot.. While recruiting is underway, we have decided to play some test games to try out several sets of rules. The rules being put to the test today are "Victory Without Quarter" by Clarence Harrison.
Jeff set up 2 small armies each tasked with capturing a knoll in that lay between them. 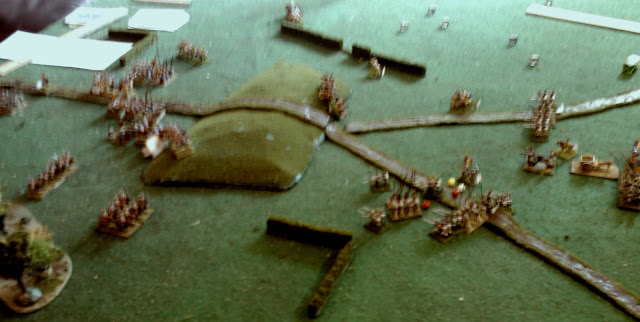 The Royalists had a brigade of cavalry containing a unit of Veteran Cuirassiers, 2 units of gallopers and a unit of dragoons,  a brigade of infantry with 3 units of pike & shot (1 raw) and a gun. Parliament fielded a brigade of cavalry including a unit of lancers (treated as gallopers) and  2 units of Trotters, a brigade of Infantry with 4 units of Pike & shot and a gun. All troops began the game off table. Normally field guns aren't allowed to move but we decided that they could move 6" a turn and would take a full move to deploy. Once deployed they could not move again. We decided to use the 25mm distances with the 15mm troops.
(wait a minute you say, if recruiting has just started, where did the troops come from? Well, Jeff's 15mm Waterloo armies provided cavalry and musketeers and my  15mm Pinkie Scots army paused on its march to eBay to provide pikemen. Does that explain the blurry pictures?
My plan was to send my cavalry ahead on the right to try and flank and/or delay his troops, seize a hedgeline  of my left with some infantry to hold that flank, use the gun to bombard the hill, and push the rest of my infantry up the right center to take the hill once the moment seemed auspicious. All of my infantry marched on deployed, the trotters came on in column to push ahead and alarm and distract the enemy as much as possible.  Jeff's plan appeared to be to rush the hill with everything, cavalry and gun on the right, infantry in the center. Most of his troops came on in column. Things were going relatively well until a chance card led to my lead Colonel suddenly having qualms about fighting his king and his regiment, being nonaligned politically but faithful to their leader, followed suit, about faced and opened fire on my troops!  It took 2 turns for me to overwhelm and destroy the turncoats, fortunately without further damage but I was now short a regiment..In the meantime, my whole infantry had stalled, leaving my cavalry to face the onrushing Royalists by them selves.
My cavalry flanking attack started off well, pushing forward rapidly, the Green squadron was able to deploy into line and charge a Royalist infantry unit in march column, Unfortunately, these hastily formed a stand of pikes and bounced me. A firefight between muskey and pistol ensued which my brave tradesmen and tinkers survived by dint of some spectacular if illegal saving throws. (we missed that they only get saving throws at long range).

(The traitors get their's)
In the center, my lancers who had ridden up the hill to delay the enemy until the infantry arrived, were left on their own  during the little internal affair and were steam rollered by the Cuirassiers led by their Brigadier in person. Next time I'll take my chances with an evade! So now I'm down 2 units with another badly shot up and not so much as a casualty on the enemy to show. It looked bleak, I dont mind saying. But suddenly the Blue Squadron, moving from suportting the Greens, swung up towards the Cuirrassiers and unleashed what was expected to be a futile 4 dice worth of pistol shots. No arguing with 3  5's and a 6 though, the enmy Brigadier, still attached, went down and the Cuirassiers went shaken, when my gun opened up a moment later, they turned tail and ran! Wheeling around, my Blues over ran the enemy artillery which had just unlimbered on the hill then chased the enemy dragoons into a wood. Things were looking up.

On the left my cavalry took some fire but charged a shaken enemy cavalry regiment in the flank and dispersed them, pursuing into a regiment of infantry. The shock sent them back but they held and my cavalry were repulsed. The enemy  Cuirassiers  rallied and in the center, his infantry and 3rd cavalry seized the hill.. Both my remaining squadrons were 1hit away from dispersal. things looked grim.
My First infantry advanced onto the hill and after a brief exchange of fire which shook the enemy infantry,  charged in and stalled. I joined them in person and finally we drove the enemy back then routed him. My infantry then reformed and opened fire on the last fresh squadron of enemy horse. Two staggering volleys were poured in but the remainder held steady.Drawing heart, my Greens finally took the time to turn under the hail of bullets and then shaken, with 2 casualty markers, made their back behind my lines and rallied. On the left my Blues were finally shot to pieces before they could retire to safety. Still, having routed the cuirassiers, destroyed another squadron, captured a gun, driven off the dragoons and battered a pike regiment, they earned their keep.
The climax was at hand, the center of attention swung back to the center as the enemy foot, freed from the threat of my cavalry, swung around and advanced to retake the hill. Unleashing the first volley, my lads stood firm and delivered a heavy blow shaking the enemy. Down came the pikes and with myself at the head they surged down the hill, dispersing the enemy foot and cutting down their Brigadier. As dusk fell the stragglers of the King's army fell back leaving the hill to Parliament.
A quick but exciting game with lots of ups and downs of fortune. We made a few goofs and had to make on the spot decisions when the rules seemed unclear, unlikely or just not there. For example, we decided that a stand of pikes is not required to pursue cavalry which it pushes back and since interpenetration is not mentioned, we allowed it which I initially supported then later thought was wrong.. As usual with card activation systems, esp those with a reshuffle card, the turn sequence sometimes favoured one side or the other and sometimes the deck seemed to be almost all Red cards, but by the end of the game this had evened out.. Perversely, I actually benefited both ways, early on when Jeff was moving most of his guys before I moved anything, we were in the approach phase it allowed me to tweak my planned moves to take his into account. Later on when I got a string of cards and some early reshuffles,  we were in the midst of combat and of crucially allowed me to steal a march and deliver some heavy blows.
All in all, I thought it had a good feel for the period as well as being fun to play. Things also felt fairly intuitive or natural, which is good.  Two thumbs up from me.
.
Posted by Ross Mac rmacfa@gmail.com

Email ThisBlogThis!Share to TwitterShare to FacebookShare to Pinterest
Labels: ecw