I was supposed to spend all day on household and garden chores. Its hell being mostly retired. But SWMBO is away, its a grey day and my mind is in the woods. Not the ones that surround me, the ones surrounding the wagon road to Fort Belmont where the garrison was anxiously awaiting supplies. 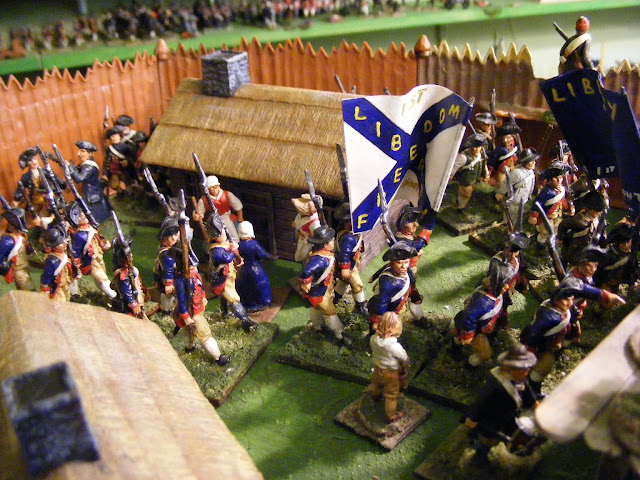 So what the heck. The wagon train from Scenarios for Wargamers is another old chestnut suitable for testing rules since I know that any issues aren't scenario related. After all, I've played versions of this probably 50 times in at least 6 scales and 10 periods using a dozen or more rule sets.

Fort Belmont sitting on a low hill, was garrisoned by a gun and 2 companies of local militia who will not leave the walls but also has a force ready to sortie. A 2 company battalion of the Newport Blues, (continentals) and a 2 company battalion of Newport militia all of under the command of the cautious Colonel Slouch.

Lurking in the surrounding woods was Major Harrop of the Cobequid Rangers (acting as general) with 2 companies of veteran rangers from his regiment, a company of veteran Jaegers, a small battalion of Hessian Grenadiers, 2 companies of Acadian loyalist irregulars, a band  of  Beothuks and 2 bands of Miqma  warriors under their Chief Glooscap. These rolled 2 dice each turn until they entered, needing to score the turn number or less to arrive. They then rolled 1 die for point of entry. (purists will note that this is slightly different than the arrival rules in the scenario). The figures are a mix of Sash & Saber, Trident, Historifig, Frontrank, Prince August homecast and Irregular with a few War of 1812 figures filling in some gaps in the OB.

Things started peacefully enough with bands of Indians and rangers sneaking up valleys and lurking in the corn but eventually the riflemen caught sight of some laggard Acadians and opened fire. Since the wagons were well onto the table, Glooscap led a band of warriors forward supported by a company of rangers. Seeing this, the Belmont Blues formed up threw open the gates and marched forth. Imagine every one's surprise when a band of Beothuks rolled a 6 and emerged from the corn to unleash a volley of fire into their flank! Actually 2 bands of indians, the Jaegers and a company of rangers had all rolled "1" and arrived through the cornfield adjacent to the fort. 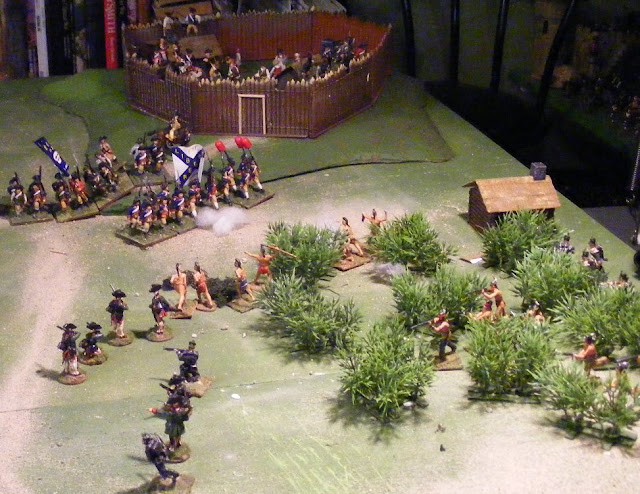 The fighting grew fierce as the Blues faced their enemy, driving them back with volleys of musket fire as a general pop pop popping of skirmish fire grew along the whole flank and front of the convoy. But as Colonel Slouch went down, struck by a Jaeger's  bullet, the Blues suddenly had enough and fled into the fort leaving the Newport men to cover their retreat. These stood for a while, but under the hail of bullets, broke as well and retreated opening up a line of fire for the fort's 6 pounder to open up with canister.

Back at the convoy, things seemed well in hand until a wild looking bunch of Acadians emerged from the woods behind the convoy and fired on the defenders just as the grenadiers emerged from behind a low ridge and rushed forward. Things were tense as the militia skirmishers broke before the grenadiers and these charged into the retreating wagons. Without hesitation, the Avalon battalion rushed forward, unleashing a ragged volley and charging into the confusion around the wagons. With a +2 on each die, the grenadiers were confident but after 2 rounds of melee and 3 grenadiers to show for 1 teamster, the grenadiers broke and ran back towards the ridge. On the other side, the Canadians advanced driving back the rangers. 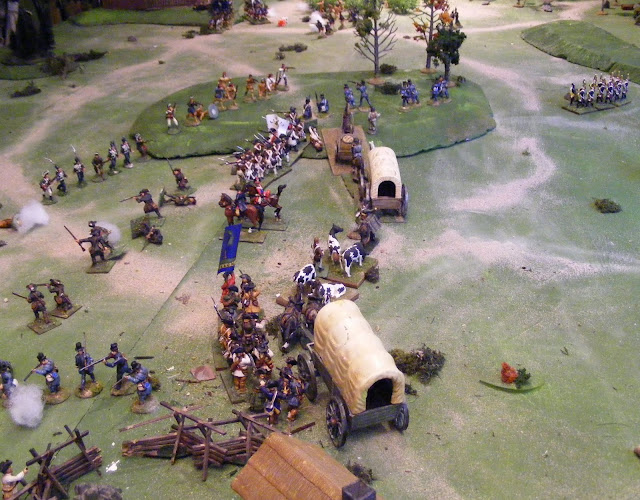 As the sun sank in the sky, Major Harrop stirred himself. After rallying the Beothuk who had been broken by heavy and accurate long range fire from the fort, he led the rangers at a run towards the convoy. On the hill, as the number of warriors surrounding Glooscap grew fewer, he raised the Whoop and led the remainder downhill in a fierce tomahawk charge which scattered the remaining rifles, then pulled back onto the ridge to regroup. It was going to be hard to capture the wagons but with the rangers and the rallied Grenadiers blocking the way, odds looked good  that the convoy could be stopped from reaching the fort and forced to turn back. It was an illusion, the Jaegers, getting  over excited, pressed in on the retreating militia and were broken by artillery. The rallied Blues sallied forth to drive off their previous tormentors, and the Acadians trading shot for shot with their more numerous opponents finally had enough. 5 out of 9 units were routing with no hope of being rallied and Major Harrop had no choice but to signal for a general retreat. The children sheltering in Fort Belmont would have fresh milk tonight. 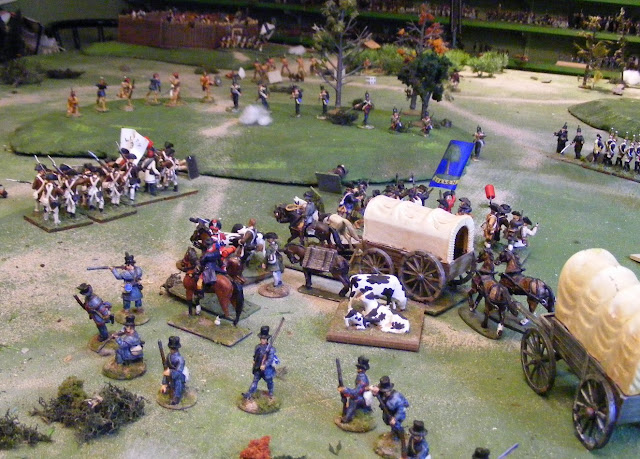 The British broke on Turn 15 after a little over 3 hours of play and the game felt like the old MacDuff games that I have been remembering fondly. I used the card sequence which I find suits skirmishes well but I went back to the original idea of letting the commanders pick which unit to activate when the card is pulled. I had moved towards marking units names of the card thus adding more friction and reducing the command ability of players but there is enough of that already and giving the player's a choice makes for a better game I think. (what a surprise since it TSATF has used the method successfully for 3 decades now!) . I made one other change  mid-game. The original Colonial game had troops close to their general being able to automatically obey orders but the F&IW version had all units check always. I like the former for regulars but not for irregulars so on the fly I added being Irregular to the list of things that will make you take a control check. This made the Indians suitably unpredictable to their European general though Glooscap was normally able to use his influence to good effect on the band he was with.

A morning well wasted as they say. Now for the chores. Then I can get back to prepping those 7 rangers for painting, digging out some unpainted indians and militia not to mention molds and planning future units, make some more trees, dig out the better Barzso stockade to be painted................ so much to do!