I know, I'm supposed to be marshaling Persians and Lydians, making trees, finishing the re-rebasing of the 1839 toys but having had a few hours, what I wanted to do and did was continue the exploration of MacDuff and of what it is I am really looking for. So out came an old chestnut, Scenario 1 from Scenarios for Wargamers, the "Fontenoy" scenario. 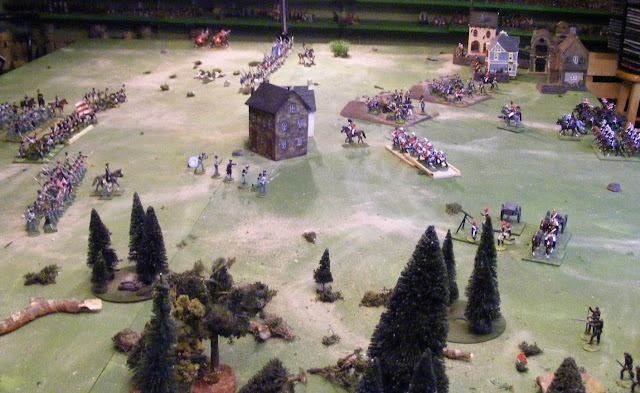 It didn't take long for some old conundrums raised their head. Oddly, they can pretty much all be summed up by the question: "less or more?".

The original MacDuff tended towards "more". Lots of turns to get a resolution,  companies that were to some degree "units" grouped into biggish battalions with 4 levels of officer figures, each with their own role. In a small skirmish with a few companies per side, it was easy enough (and this was the sort of game it was designed for) but increasingly I wanted to play with as many battalions as I had originally used companies and now despite simple combat and movement rules, the complexity of tracking multiple levels became onerous and games took a long time, particularly since while individual companies could be broken fairly easily, a battalion was usually able to rally and come back again , often more than once if good quality and not vigorously pursued.   (which was intended ). Good for solo games or a couple of friends with a whole day and evening to kill but not so good for club or convention games.

So back to the game. Being for once in a leisurely mode with some assurance that for several days I could claim several hours a day as my own, and being a point of life change where I am determined to sort a few things out before I forge ahead, I heeded these questions as they arose.  The first was that of unit size. My 1812 units are largely organized in 8 man companies, 2 companies for lights, 3 for US and 4 for Brits. My 1839 units are variously organized for Charge!, for MacDuff or for Morschauser depending on exactly when they were raised.

Stepping back and looking at the scenarios I plan to make most use of, the guidelines are that infantry units are twice the size of cavalry and light infantry and batteries are 2 guns, which suggests that they were originally conceived for the Grant rules from The Wargame. Now, I now I don't have to conform but it amuses me to do so and it happens to fit my 1812 organization well (no accident). But, since the typical larger scenario calls for as many as 8 infantry, 2 light cavalry and 4 cavalry units plus 4 guns, that is some 288 infantry and 64 cavalry plus staff and on my 8 foot  table, that will line the table edge to edge with 2 lines of units in line. Cutting it in 1/2 is feasible, basically making a scenario unit 1 company (squadron) or cavalry or light infantry or 2 companies of infantry and then grouping them into battalions where appropriate. The larger armies will fill its side of the table but only once and  not all armies are that size and it does allow for a reserve.

Now how about the interplay of Army General, Brigadier, Colonel, Regiment, Captain and Company. Frankly, its a nice idea and reflects the reality of a hierarchical organization but its too much for a simple game.
What are some options?

What bits of this are important to me?


What I tried is eliminating the Brigadiers and making the battalions larger. So in the scenario where it called for the attacker to have 8 infantry, 1 lt inf, 3 cavalry and 4 guns, I fielded  2 battalions each of 6 companies, 1 with 4 line and 1 light company, a 2 squadron cavalry regiment, an independent cavalry squadron, and 2 batteries each of 2 guns. Their less numerous opponant fielded 2 4 company regiments, a 2 squadron cavalry regiment, 4 1 gun batteries (only because 3 were assigned to 1 gun redoubts) and an independent rifle company. In effect, the Colonels were now acting as pseudo-Brigadiers and the organization of the battlions was rapidly approaching Charge! standard. Overall it worked and I enjoyed the game but the oversize regiments took an incredible amount of punishment but were fairly inflexible, the general effectively only having 3 infantry units. The fighting around the redoubts and buildings resulted in detached companies all over the place with confusion over who should or shouldn't be considered independent, especially when it came to being broken and rallying casualties.

It has conformed in my mind that the well tried 2 or 4 x8 organization that I adopted for 1812 works for me. I can now set that aside.  Not for the first time though, it occurs to me that what I really need is two variants of the same game, using the existing units and sahring the same movement, combat and morale rules. A "Skirmish" game where "units" are companies commanded by Captains and there are no Brigadiers but rather Colonels control their units as an extension of the "General"  and a "Battle" game where "units" are battalions (though capable of detaching companies in certain circumstances such as to form a skirmish line or occupy buildings) and where the Colonel becomes merely a unit commander and Brigadiers have a command role, extending the control of the General.

So what happened? Briefly on the left,  the out of command 4th infantry, 50 strong  advanced against the town under heavy artillery fire and were then charged by the British cavalry and driven back across the table, finally rallying on the edge when the 2nd NY dragoons  intervened to drive off their pursuers. The Dragoons, also out of command, unfortunately got carried away (6 on the control chart), charged the redoubts and were broken by doubled shotted guns.

In the center, concentrated artillery fire drove the British out of one house but an assault on the other by the 1st US met a flurry of bad dice and they were repulsed. The 3rd US occupied the other house, broke the Buffs with fire and began a fire fight with the closest redoubt, eventually driving the defenders back with the aid of the field guns. The 2nd Dragoons bypassed the rallying 1st Infantry and swept around the rear of the town, forcing the Buffs and RHA to scurry for cover but suffering heavily from enfilade fire from the 3rd redoubt and riflemen. They were finally broken by the rallied British cavalry even those these were also forced to retreat off table due to casualties despite winning the melee.

The final act was an assault by the rallied 1st Infantry on the 3rd redoubt and by the rallied 4th Infantry on the town. Both regiments were broken by fire just as they prepared to close the last few inches with the bayonet and the American army having 1/2 its units broken at the end of the turn was forced to concede even though several of these would most likely have rallied in a turn or 2. The British were a few figures away from the same state so a narrow, Pyhrric victory at best and a close game. The game was played in 4 or 5 separate sessions around chores over an evening and a day, probably no more than 4 or at most 5 hours in total though. I didn't count turns, it had to be close to 20. It occurred to me near the end  that while time might be a problem for a club or convention game, it was no problem for a solo one!

Tonight I am going to reset using my "standard: units, tweak the rules as mentioned above into a battle and skirmish variant and over Sunday and possibly Monday, run through it again.
(note tweaked rules are here: http://www.lochsloy.ca/wargames/macduff2010.doc)
Posted by Ross Mac rmacfa@gmail.com