I don't think it's much of a secret that I have a 'thing' for glossy toy soldiers but it may surprise some that I have a  strong attraction for element based rules. By element based, I am not referring to any rules where multiple figures are mounted on a base  but ones where that base or element is a playing piece or unit with its own properties. In some cases, these elements might operate as part of a group but essentially each is a unit in its own right. (DBA & V&B are probably the 2 best known modern versions of this concept but Joe Morschauser's book is the oldest published rules that I am aware of that use the system.)

Since I was exploring Morschauser at the same time that I was discovering the Scruby and Zinnbrigade figures its no surprise that I soon found myself in conflict: Toy Soldiers' natural mode is as groups of individuals but I was focussed on the element as the basis of a game. After basing and re-basing several times in a search for a final solution, I think I may have it. There are 3 key components:

a) toy soldiers mounted individually
b) rules built around implicit rather than explicit elements of 4 infantry and 2 cavalry which means they can be used either way without upsetting too many apple carts. (hmmm there is one that suddenly comes to mind, something to think about later)
c) the magic ingredient: 40mm toy style figures that are light enough that a magnet will hold them! Magnets and some form of movement tray were an obvious solution but most of my 40mm figures are large and clunky  and early experiments failed miserably with figures toppling at the slightest tilt. (I know that more powerful magnets must exist if I looked hard enough and paid enough but I'm into cheap and easy).

However,  recently I tried one more time but with one of the smaller, lighter, Scruby figures and to my surprise, they held! I started working on designing big movement trays for 8 or 12 figures but having borrowed some troops on my preferred  4 man permanent stands,  I was reminded how much I liked them. It suddenly occurred to me that if I took the stack of abandoned Litko 60x45mm bases that I had originally planned to use (see the header picture), turned them sideways, added some sticky magnetic paper, also still waiting in the cupboard and some strips to give my fingers something to grip I could have both at once, and all that money spent in the past would no longer be wasted! Without more ado: 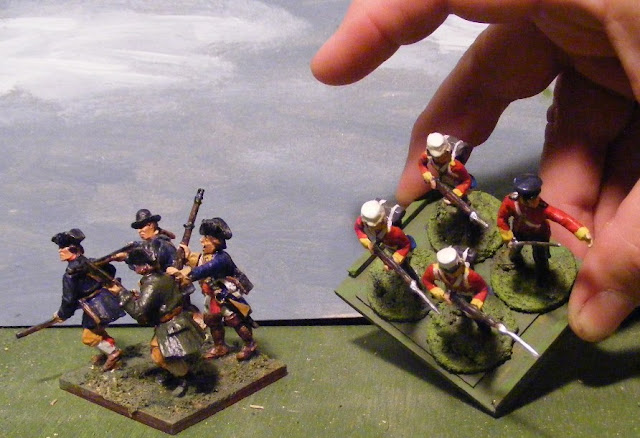 Fixed element on left vs new temporary element on the right. Note angle of dangle. They will usually hold even perpendicular to the ground as long as you hold the base not the figures. Sash & Saber and Trident start falling off at about 30 degrees even though mounted on the same washers. 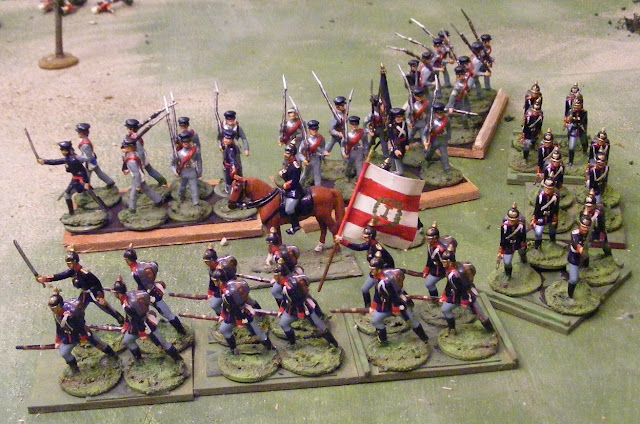 4 man stands vs 8 man ones: More fiddling to move a unit but experience tells me 4 out of 5 games won't bother to turn more than a few figures on the end when they go into march column!
At the moment, my rules are unit based rather than individual based or element based but I'm happy that I can proceed with basing and handle all 3 rule concepts without further basing, The best of all worlds?
Posted by Ross Mac rmacfa@gmail.com