Close Encounter of the First Kind

Today was the first outing for my new ECW Scots army. I say new but while the army as such is new, most of the troops are not. The game saw an encounter between an allied army and Jeff's newly raised Royalist force backed by some of Gary's cavalry. We are still in the process of gearing up for an ECW campaign, testing rules and getting our feet wet. The rules in use today were Victory Without Quarter with a few off the cuff interpretations and house rules.  The camera alas was my cellphone and the lighting was not optimal for its capabilities or mine.

The Scots army was composed of:

Now a word of explanation is probably in order. The rules do not cover highlanders and rather than introduce a house rule before we were fully familiar, I suggested just running them as commanded shot. it over estimates the firepower of my archers but does make them more vulnerable to cavalry and to firefights since they only take 2 casualty markers and overall the effect was about right. The figures in this unit date back to about 1975 and my Valdurian army, later being incorporated in my 15th/16thC Scottish army, so I argued for veteran status and won my case. My other units were a mix of veteran troops with newly painted/sculpted figures who would have been green on their own but the mix brought them up to a believable trained status. 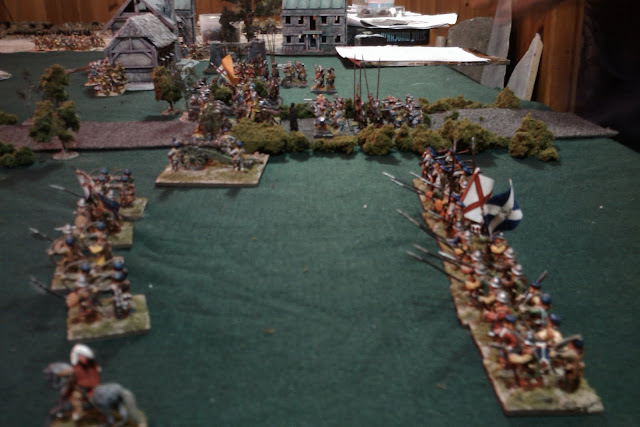 Opposing the Scots were Jeff's Royalists with 7 green units of foot, each with 1 stand of pike and 2 of shot, and a field gun. George commanded Gary's cavalry wing with a regiment with 2 squadrons of trained horse (gallopers), a single squadron regiment and a light gun.

Supporting the Scots (well its MY battle report) was a Parliamentary force under Martin with more of Gary's troops, 1 squadron of raw horse (trotters), a light gun and 5 or 6 regiments of raw foot, each 1 pike and 2 shot, all, it was hard to see them through the hedge and village and all that smoke. 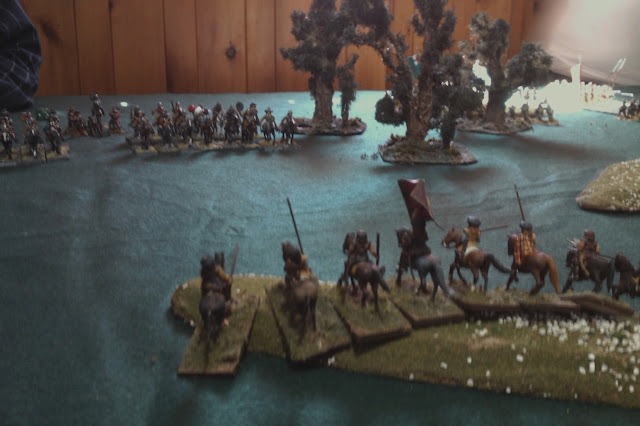 The battle plan for the allied army as far as I understood it, was for my English allies to advance and seize the town while pinning the enemy in place and wearing him down. My veteran and regular troops were to advance and sweep away twice their numbers of green troops. On seeing all of the King's cavalry lined up against my flank, my instinct was to hold back my lancers but instead I sent forward the clansmen and the lancers to seize a little hillock, hoping that it would help offset his numerical advantage.  Unfortunately, I allowed the lancers to ride ahead and George humbugged me by bringing forward a gun that I hadn't seen.
With the first round he landed a hit and the Picts that I had recruited in the ranks of my lancers panicked and the unit went shaken. George followed up with a charge and drove them off after a short scrimmage. Here is where one of the impromptu house rules kicked in. After a short discussion we decided that the Royalist horse would have to keep pursuing until they passed a morale check. Luckily this kept them out of the game for a few turns

.
While this was going on, the Parliamentary cavalry had crossed over the hedge and attempted to win a firefight with the Royalist infantry. George sent a squadron to charge them in the flank and we looked in vain for rules on flank charges. We ended up deciding that George did not need to pass a morale check to charge and that Martin had to take the charge at the halt without firing but could turn to face. The result was no surprise and in short order the trotters were dispersed, leaving the Royalist gallopers in range of my newly sculpted and cast Scots infantry and in medium range of my gun (crewed by the same castings, slightly modified) . Moments later the broken remnants of George's horse galloped back to safety where they rallied and lurked for a bit. This left the way open for my clansman to advance and wipe out the light gun. Things were looking up on the Scots side of the hedge! 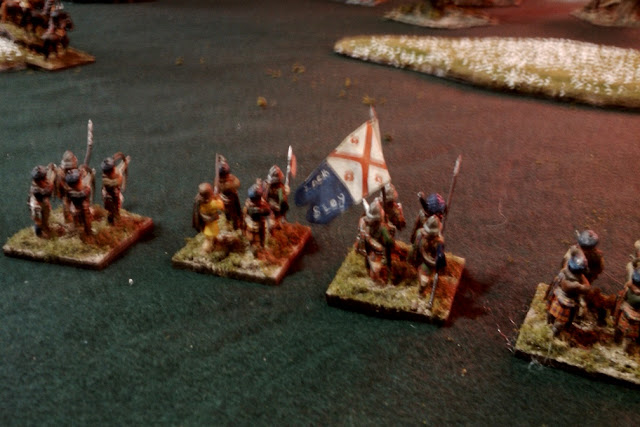 Across the hedge, a ding dong firefight between the two forces of green infantry initially seemed to go in the King's favour as the Royal troops held back, relying on artillery and long range musket fire to panic the enemy's raw troops. Due to the hedges, the opposing infantry ended up in column fighting for control of the road, again we had to make some quick calls as the situation didn't seem to be covered and the rules over what a column could or couldn't do weren't clear. A drunken master gunner  unfortunately took off with the Parliamentary gun (event card) but eventually their infantry started hitting back and neither side managed a decisive advantage. 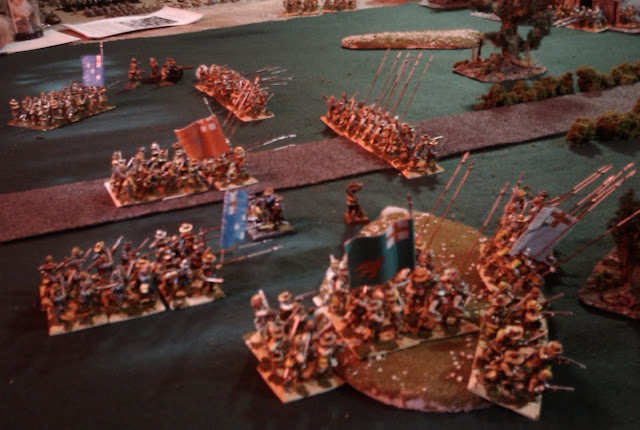 Back on the Scots side of the hedge, I tried to regoup as George's various squadrons rallied and began to threaten me from front and rear and Jeff's infantry started working their way forward past the wood. My infantry with their sole stand of muskets, just didn't have the oomph to inflict serious damage on the enemy but the cards gave me the best chance they could have with a close range volley, 3 dice needing 3 or better to hit but needing all 3 hits to have any effect. My musketeers were converted pikemen mixed with archers and they just didn't manage it. They did manage to get in between the enemy cavalry and the rear of my artillery. 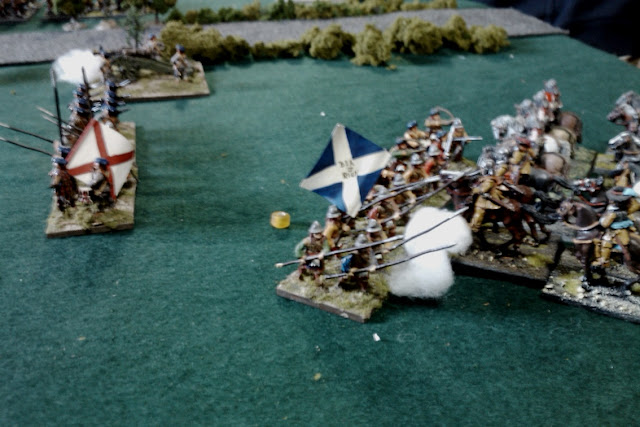 Steady pikes, I figured they had a good chance of holding but it seems they lacked confidence in their newly painted Colonel and no pride in their new colours as they failed to either hit in melee, or to pass morale and soon George's troopers were pressing forward and into the rear of the new battalion of the Strathcona's.  These, despite ample chances to form a pikestand, were still in line facing forward to protect the gun. Undeterred by the rear charge, they fought the cavalry to a standstill and turned around. The 2nd squadron of cavalry charged  in and the Strathcona's pushed them all back. The rallied single squadron of Royalists spurred forward, over ran the gun but couldn't quite reach the rear of my infantry. Like a deus ex-machina, a stand of Parlimentary foot appeared in a break in the hedge and blew them to bits! The Strathcona's proceeded to rout the enemy cavalry, one squadron after another! 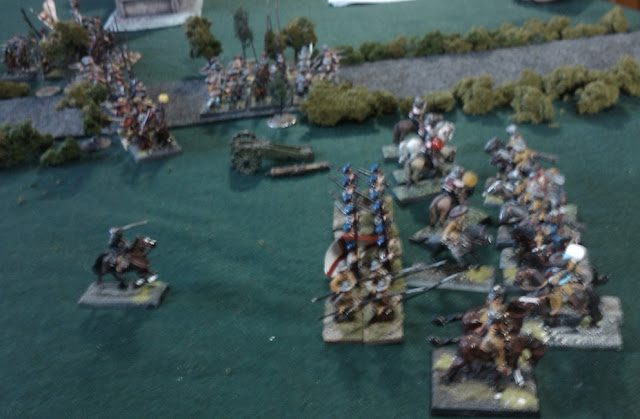 One last drama remained, the Macfarlanes, Earl Ross at their head, pressed forward, 2 veteran stands against 6 stands of raw enemy troops. They unleashed a devastating volley into the White regiment and then charged, routing them. As they shepherded the enemy across the field, they wheeled to face the Green regiment but bolstered by Jeff's personal figure, these held firm despite casualties and in the ensuing firefight, the Macfarlanes were effectively wiped out.  Earl Ross fell back and ordered the Strathcona's to cover the retreat of the various wounded and stragglers as they limped from the field.  Darkness was coming on a pace and with 1/2 the Royalist army routed, the two English armies agreed to call it a day. 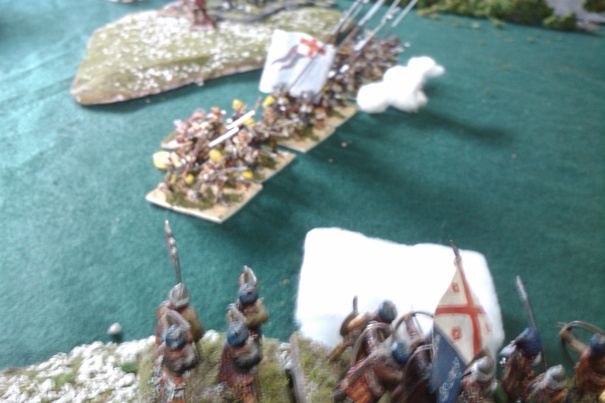